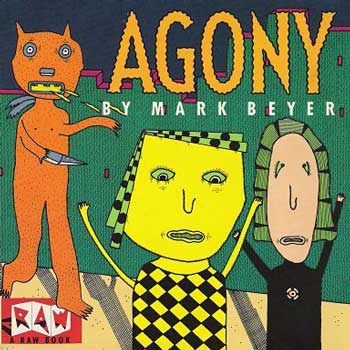 It’s difficult to write about any individual Mark Beyer comic. His works return to the same characters, motifs and events, so particular to his voice that a broad description of a Beyer comic can just as easily describe his entire oeuvre. Beyer draws nihilistic stories about life going from bad to worse, usually focusing on Amy and Jordan, a couple whose life is beyond bleak. His art is childlike and dementedly unreal; bizarre forms and wonky perspectives, complemented by obsessive, handmade stippling, create an atmosphere of fanatical intensity. The language of Amy and Jordan stories are almost drab in their bluntness, adding to the overall sense of unreality. It’s a world of disaster that is both terrifying and hilarious at once. A typical Amy and Jordan panel shows the two menaced by some strange-looking knife-wielding monstrosity, arms in the air, flatly screaming “aaaahhhhh!”

First and foremost, Agony is a long Amy and Jordan story. Presented in a squat, square paperback that can fit in your coat pocket, Agony is a descent into the mad, sad logic of Beyer’s universe – there are a number of scenes in which Amy and Jordan fall, into fish tanks, ranches, and apartments, under floorboards, and generally into situations of increasing danger and dismay. The two lose their jobs, are attacked by ghouls, are exploited and unjustly punished, witness murder, and are betrayed by just about everyone they meet. At several points in the book, Amy’s body shrivels, grows, deforms, and is hospitalized, leaving Jordan impotent in his failure to protect her. Perhaps the definitive scene of this book is one in which Amy throws the unfairly earned money Jordan has obtained to pay her medical bills into the street in an attempt to rid herself of the guilt. The next day, Amy reads in the paper that three people died fighting over the money, and muses, “What’s the use Jordan we’re not capable of doing anything right ever!”

There’s a strange delight that can be found in reading Agony. Amid the hyperbolic strife is a great deal of humor and powerful imagery. Beyer’s art holds an iconographic weight and involves the sort of imagery that will stay in the reader’s mind well after reading (an image on page 85 depicting Jordan in prison studying Latin should be perversely resonant to anyone with any experience in higher education). Beyer’s major artistic precedent is Rory Hayes, whose Pooh Rass stories tread similar ground in cartoon nightmares. However, there’s an intensity and focus to Beyer’s work that arguably eclipses Hayes’s drug-fueled freakouts. Beyer is an unusual artist, but more than that he is an obsessive one, and the effect of reading such obsessed work is a sense of elation and invigoration that works in tandem with the frightening content of his tales – in other words, reading Agony is deeply cathartic.

The new edition of Agony from New York Review Book’s nascent, impressive comics imprint is more or less an identical facsimile of the old Raw paperback from 1987, aside from some new ad copy and an excellent introduction by Colson Whitehead. The artwork is beautifully reproduced, and possibly looks better than ever. The New York Review ought to be commended for giving such an essential and overlooked work archival context in this new edition, although first-time readers might want to wait to read Mr. Whitehead’s introduction until after the first read through. Much as he does an exceptional, artful job discussing the work in his essay, the power of Agony comes in part from diving right in.