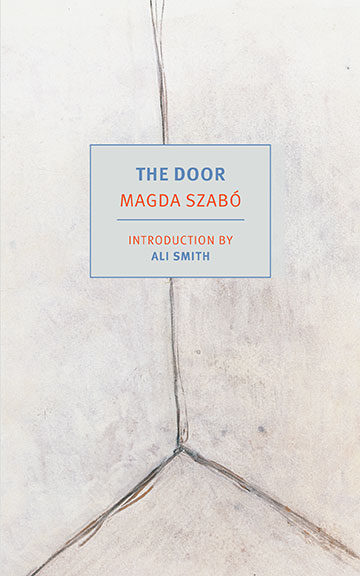 Popular aphorism: the Eskimo people have more than 50 words for snow. They have, embedded in their language, almost a hundred distinctive terms for each type of snow, every kind of snow that can possibly exist or has ever existed. Every delineation within the semantic category “snow” is honored by its specific traits and virtues. The types cannot coexist, though they may drift into one another.

Another popular aphorism: love is patient, love is kind. Love being as common as snowflakes to us, as individual and as piercing. We should have a thousand names for love; it seems unnatural to group them all under one generic title. One four-letter word.

Some types of love cannot be corralled, as narrator Magda finds in the legendary Hungarian novelist Magda Szabó’s novel The Door, originally published in 1987 and now out in a new English translation by Len Rix. These other kinds of love are elemental—the way the Greek heroes were, in their mythological stature—and too terrible to share the flimsy mantel “love” with puppy-dog eyes and Valentine cards.

The person in whom Magda discovers this other kind of love is Emerence Szeredas. Magda and her husband, both writers in a time when it was politically difficult to be an artist in Hungary, hire Emerence to keep house for them. Emerence is known as a hard worker, despite being in her 70s. She cares for many families in the neighborhood, not out of necessity, it seems, but from a sense of pride. “I don’t wash just anyone’s dirty linen,” she says. After checking Magda’s references, she begins working for the couple, and her relationship with Magda begins to take shape.

The small scale of The Door is intimate and satisfying. Rather than tackle the larger issues head-on, Szabó allows them to niggle into the fabric of the story. World War II is over, still fresh in the characters’ memories. The smell of death on the battlefield is evoked by the mauled corpse of a cat. Empty cattle cars. The “disappeared” Jewish families, and the Hungarians who were able to help them escape. All these things, as well as the advent of space travel, television, and new kinds of music, create a landscape for Emerence to stride across in her daily, unchanging ritual of labor. Every waking moment is for sweeping, laundry, cooking, cleaning, and other domestic labor. She does not sleep, but reclines on a small “lover’s couch” in one corner of her kitchen. Her front door is permanently locked.

She stood for certainty—in summer the first ripening cherry, in autumn the thud of falling chestnuts, the golden roast pumpkin of winter, and, in spring, the first bud on the hedgerow. Emerence was pure and incorruptible, the better self that each and every one of us aspired to be. With her permanently veiled forehead and her face that was tranquil as a lake, she asked nothing from anyone and depended on no-one. She shouldered everyone’s burden without ever speaking of her own, and when she did finally need my help, I went off to play my part in a TV show and left her, in the squalor of advanced illness, for others to witness the single moment of degradation in her life.

Emerence is unnatural in her naturalness, surreal in her realness. She is a monster of purity, and she wages holy war in Magda’s life. Her expectations are too high; “she was like Jehovah: she punished for generations.” As Magda’s career starts to coalesce—the Communist regime is in full force, and the right bureaucrats are finally interested in her writing—the tide turns in the women’s relationship.

Magda, so accustomed to relying on Emerence, is called to return Emerence’s love. However, Magda is only human. She justifies her every failure to reciprocate. It’s a class issue; Magda tells herself that Emerence is a peasant, a beast of burden, a bad Christian. But her own threadbare intellectualism can’t overlook the trope they’re both participating in. Magda’s knowledge of the world does not elevate her bourgeois concepts of right and wrong; Emerence’s ideals do not free her from her servitude. In the end, both of them are locked into their respective classes. Love may bridge the gap between the two women, but it doesn’t mend their differences. In the end, the two sides are diametrically opposed, even in the moment when the need for reconciliation is greatest.

Magda’s fascination with Emerence subtly influences her, illuminating her many failings. In the domestic world Emerence creates for the two women, everything that makes Magda splendid is in fact cheap and worthless. Magda’s knowledge of Greek mythology, European languages, and her many novels butter no parsnips for Emerence. Likewise, Emerence does not translate into Magda’s world. She is crude, in her way—a conversation piece for Magda and her academic friends.

The tension between Magda and her housekeeper is fascinating, and sometimes sickening as well. From the first sentence, we already know that Magda has failed, and that, like Judas, her sin against the person who loves her most purely has damned her. The novel, which is presented as a memoir, is a chronicle of her self-condemnation. Emerence, safely ensconced in the past, is a dangerous memory to play with, but Szabó does her characters justice even as she reveals her narrator’s weaknesses. Emerence is, after all, too good to be good forever:

She was like someone standing in strong sunlight on a mountain top, looking back down the valley from which she had emerged and trembling with the memory still in her bones of the length and nature of the road she had travelled, the glaciers and forded rivers, the weariness and danger, and conscious of how far she still had to go. There was also compassion in that face, a feeling of pity for all the poor people below, who knew only that the peaks were rosy in twilight, but not the real meaning of the road itself.

The Door is highly decorated, by several significant awards—but what’s the point of those? The story celebrates love, the kind that is too perfectly made to exist on Earth. The kind we crave, and will never deserve, that slips through our fingers even as we cry out that we were wrong. Popular aphorism: love means never having to say you’re sorry. The love shared by Magda and Emerence cuts like a knife, and in the end, the only thing Magda can say is, I was wrong. Her redemption, of course, is up to the reader.