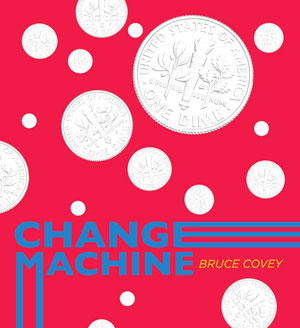 Think about the change machine outside your car wash: you put in a dollar, the machine spits out coins. Not a neat bundle, but a jangling tray-full. Now think of William Carlos Williams: “A poem is a machine made of words.”Now give William Carlos Williams superpowers and have him beat the hell out of the car wash while musing on Pokémon, Barthes, and metapoetics, and you’ve got a sense of Bruce Covey’s Change Machine.

Covey knows the canon well, and treats it with a mix of comic distance and yearning. Take a poem like “29 Epiphanies.” The speaker has read the classics and gleaned a lot of meaning from them – just not quite the meanings the authors had in mind. From Coleridge, we get “Just leave the albatross the fuck alone.” From Blake, “A lamb is different than a tiger,” from Dante, “Beatrice is out of your league,” and from the Greek myths, “Styx is another name for shit’s creek.”

As much as he may poke fun at the canon, Covey’s speaker also has a desire to be part of it – a desire he treats with irony but does not fully discredit. Take the prose piece “A True Account of Talking to the Moon in Atlanta, GA”:

I was leaving the CVS with a new toothbrush, pack of Q-tips, and a 4-pack of sugar-free Red Bull when the moon emerged from the shadows and asked me for a cigarette.

“Sorry, I don’t smoke.”
“Whatever: People are so fucking health conscious these days.”
“Say, aren’t you the moon?” I recognized the craters!

“…The Sun appeared to Frank O’Hara and Vladimir Mayakovsky. Now, you’re the Moon, right, and you’re appearing to me! I’m so happy! I’m finally part of the canon!…”
“Look, I’ve never heard of you. Bruce, right? Don’t go nuts on me with all of your moon stereotypes. I don’t give a shit whether you write poems. I just want a fucking cigarette…” 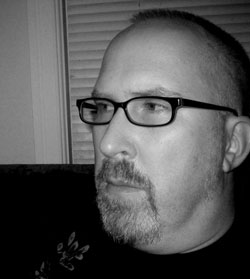 Covey lives in a world where art, technology, and life are in a constant, noisy argument. Take “The Death of Cinema” – when a character talks about Lasik surgery and asks if his interlocutor has seen Un Chien Andalou’s notorious eyeball-slicing scene, the response is “No, but I watch Youtube. In one, this guy’s eye comes out of its socket and is just swinging around…It’s really cool.” Within this chaotic world, feelings and perceptions can’t be trusted: “I’m not sure I trust this happy mood. / Weather.com had forecast something else entirely” (“Pills & Pillows”).

Sometimes Covey’s answer to such uncertainty is the presentation of nonsense or near-nonsense. It’s a postmodern move we know well: as the critic Jerome Klinkowitz has said, “If the world is absurd, if what passes for reality is distressingly unreal, why spend time representing it?” So we get poems like “Spotted Leisure”: “Would you rather have chocolate or cherry? / Or, rather, the entire continent thereof? / The game in which every hand has a four – / Diamonds, spades, cloves, vehicles…” Or a poem like “We Hold These Fruits to Be Self Evident,” in which Covey riffs on the structure of the Declaration of Independence while substituting the names of various fruits – we have the framework of revered language, but the content is absurd. We try to make the parts cohere, but they resist.

Covey is aware of our desire to make sense. Take “Hieroglyphics.” The poem’s title gives us the sense of something full of meaning but inscrutable, a language we recognize but can’t read. We read that sense of mystery into scenes of Georgia Governor Sonny Perdue praying for rain in drought, the last of our electricity being shipped from Canada on trucks, and a tornado scattering elms. We get apocalyptic images – but what to make of them?

At other times, Covey forces us to confront and make sense of the “unpoetic” material of pop culture. Covey gives us, for instance, “Superheroes as 2004 Volkswagen Passat: A Double Sonnet”: “The Invisible Woman is the windshield. / Mr. Fantastic is the wiper fluid. / The Thing is the Tire.” The poem continues in exactly this format, offering a litany of 28 superheroes and their most suitable roles in a Passat.

“Superheroes…” also foregrounds a favorite technique of Change Machine: repetition. For another example, take “Wealthy: A Sonnet,” in which every line follows the format “[country] has a huge supply of silver,” until we reach a volta in the final couplet: “[country] has a huge supply of [other metal].” The repetition is as jarring as you’d expect. By framing the poem as a sonnet, Covey channels the frustration that we feel about the excessive repetition into a questioning of the sonnet form itself: we have a volta, we have rhyme (silver rhymes with silver, and only silver, again and again and again) – does that make for a sonnet?

Sonnets, with their long history of formal experimentation, are a favorite vehicle for Covey’s metapoetry-through-repetition. In another poem, titled “Sonnet,” Covey reflects on various traditions of poetry:

And so on. All these traditions – and underlying them, one simple, frightening fact. The repetition forces us to consider the first line through each of the various lenses, and to critically examine the very process of taxonomizing poems.

If a poem is a machine made out of words, Covey wants to change that machine. (Punning, incidentally, is a favorite source of meaning in the book).  To change a machine, you have to dismantle it, study the parts, test them and test them and test them again. It won’t always be pretty, and the gears inside may be bewildering – but you get a view you’ve never quite had before.