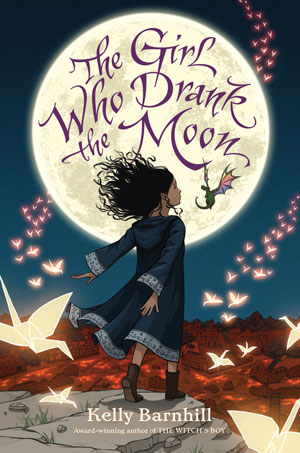 THE GIRL WHO DRANK THE MOON
by Kelly Barnhill
Algonquin Young Readers, 400 pages

There’s something compelling about orphan stories and Kelly Barnhill’s The Girl Who Drank the Moon draws on this fascination. When I look back at my favorite childhood books, they all have one thing in common—main characters who are orphaned or abandoned. Barnhill’s story opens and immediately draws the reader in with the tragic, forced abandonment of a baby girl in the forest, an annual sacrifice meant to appease the Witch so that the villagers of the Protectorate may live safely for the next year.

This middle grade fantasy is a story with a magical twist. Baby Luna is not completely abandoned because a good witch saves her. In fact, the kind-hearted witch Xan has been saving the babies of the Protectorate every year and taking them to towns across the forest where they are beloved by their new families. These are the Star Children, so called because, on the journey, Xan feeds them magic from the stars. During the journey with baby Luna, two unusual things occur—one, Xan falls in love with Luna and decides to adopt her as her grandchild, and, two, she accidentally feeds the child from the moon and not the stars, infusing her with powerful magic.

Luna’s story takes another sorrowful turn when her budding magic slowly drains Xan’s magic out of her, aging her prematurely. Xan casts a spell to lock up Luna’s magic until she turns 13, with the hope that it will slow Xan’s aging and give her enough time to teach Luna to control her magic. The repercussions of this decision are far-reaching and emphasize one of the big frustrations of childhood: the inability to make your own decisions.

Barnhill mixes simple prose with beautiful imagery to a masterful effect. In describing baby Luna, she writes, “She was a waterfall of sound, pouring, pouring, pouring. And she never stopped.” Barnhill uses clear language to deftly explore complex ideas. The way she handles death is particularly well done. Luna worries that her grandmother will die and, though it makes her terribly sad, she notes the dead don’t seem to mind being dead since they have moved on to other things. The monster-poet Glerk speaks in riddles about death, hinting that all the world came from The Bog and, when you die, the greatest adventure is to return to it. Perfect for young readers, these notions reassure us that death is a part of living and not to be feared.

Though Luna’s story is central to the overall plot, the book is told from the viewpoint of a multitude of other characters, all of whom are connected by Luna’s arboreal abandonment. There is Antain, a young boy whose life is forever changed by his role in Luna’s kidnapping. Luna’s birth mother, now a madwoman locked in a tower, who taps into her own magic and creates legions of paper birds. And the sinister Sister Ignatia, who feeds off the sorrows of the Protectorate. These storylines enrich rather than compete with Luna’s, layering on top of one another to slowly reveal the truth behind why the babies of the Protectorate are abandoned.

In between these storylines, there are short, italicized chapters from an unknown narrator or, perhaps, narrators, depicting scary stories about the evil deeds of the Witch. At first, these can feel jarring and take you out of the main storyline, but, as more and more appear, these italicized chapters share a universal truth about storytelling: it’s hard to find the truth in any one story. As one of my favorite minor characters, Ethyne, expounds, “Stories can bend and twist and obfuscate.”

My favorite part of The Girl Who Drank the Moon is not the riveting plotline, though it did keep me turning the pages, but, rather, how fondly Barnhill writes of the child/parent relationship. As a new parent myself, her descriptions of how completely baby Luna changes Xan’s household hold a hilarious amount of truth. Luna’s mother never gives up hope she will see her child again, constantly pulling on her magic to draw maps to Luna’s location. And Ehtyne, the character who most embodies this parental love, rallies the villagers and spreads hope because she wants a brighter future for her newborn son.

In the end, it is the strong element of emotional entanglement between parents and children that sets this book apart from the bursting shelves of middle grade fantasy. Barnhill does an excellent job of reminding us that, while sorrow can be a dangerous and overwhelming force, love is an even greater magic.

Mandy King works as a digital marketing strategist, spending most of her days writing and editing content that lives on the web. The best job she ever had was head of the events and marketing program at Boulder Book Store, one of the U.S.’s largest independent bookstores. To her mind, the perfect day starts with a cup of tea and ends with a bag (or two) of new books.