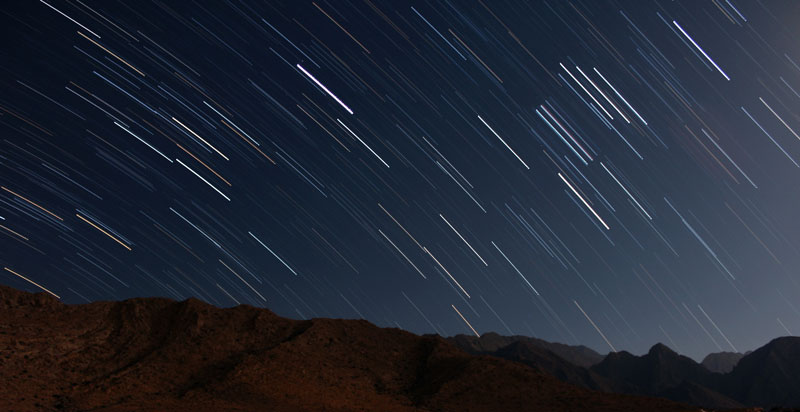 WHY I WRITE
Or, It’s The End of the World as We Know It and I Feel (Sorta) Fine
by J.G. McClure

I remember as a kid going to a science museum somewhere in Missouri. They had an exhibit—basically a rickety computer with MS Paint hooked up to a radio transmitter. The idea was this: you’d draw a picture, the transmitter would transmit it upward, and voila, your masterpiece would travel out among the stars, waiting for distant life-forms to receive it. Whether this actually happened or whether it’s merely a cocktail of youthful misunderstanding and nostalgia is beside the point. I remember it, and I remember the conviction that aliens would discover my rudimentary stick figure family and feel a pang of pathos for life on our little rock.

This was a great deal of pressure. If the drawing was bad, what would that say about our society? The aliens who found my little sketch—the lines rough, the colors off—might decide not to visit us after all. Or worse, they might rain fiery death down on us all for my grave sins against representational art. (My sketches were not good. If that turns out to be what dooms our world, I apologize.)

A recent piece in Esquire, entitled “When the End of Civilization Is Your Day Job, or, Ballad of the Sad Climatologists,” explores the “pre-traumatic stress” experienced by climate researchers: the prevailing sense of apocalypse among the folks who know apocalypse best. The story describes “the gradual shift from hope of prevention to plans for adaptation” to an Earth so unrecognizable that we shouldn’t even call it Earth anymore. (One writer proposes “Eaarth”). Even the “optimists” of the story speak of glacial melt, rising sea levels, and the obliteration of coastal cities worldwide as a foregone conclusion. As one researcher puts it, “We’re fucked.” Some of the less-hopeful scientists have moved into the woods (as far inland as possible) and set up off-grid cabins to wait out the end of days.

Of course, apocalyptic predictions are nothing new. Christianity has argued that we’re living in the latter days pretty much since its inception. (Odd, then, that the GOP-Fundamentalist Complex so vehemently denies climate change—this is what they’ve been waiting for!). And it’s no secret that everyone who lives dies—we each face our own private Weltende.

But our contemporary vision of the end seems different, in that it erases the traditional hopes of immortality. The tormentedly atheist Generación de ‘98 poet and playwright Miguel de Unamuno famously said that there are only three ways to cheat death: plant a tree, raise a kid, or write a book. For a long time I’ve put all my hopes in the book category. I’m certainly not the first: Shakespeare is full of boasts about how his poems will immortalize him and/or his beloved:

Nor shall Death brag thou wander’st in his shade,
When in eternal lines to time thou grow’st:
So long as men can breathe or eyes can see,
So long lives this, and this gives life to thee.

This is a species of immortality, but a deeply contingent one: when humans can’t breathe anymore, the beloved finally, truly dies. At the time of writing, that wasn’t a great concern. But now that we live in a world in which it is taken as a matter of course that on certain days it isn’t safe to breathe the air (see Beijing or Los Angeles), the line has a new and unintended sense of menace.

There are countless examples, each equally contingent. Take Keats’s fears that he may cease to be, Romanticism at large, Gilgamesh’s tower, Beowulf’s eulogy. Or take the oft-anthologized Aztec song “No acabarán mis flores” as translated by Miguel León-Portilla:

The argument is familiar: even when flowers wither, my flowers (poems) will not end; they will be carried up into the house of the golden-feathered bird. This comes from an oral tradition: the singing of the poem is what allows it to transcend and endure. But today, when shifting climates stunt the flowers and drive the birds extinct (Jonathan Franzen has argued in the New Yorker that at this stage we should treat conservation as a kind of palliative care: give the birds preserves on which to die out a little more comfortably), how much comfort is left in this boast? Who sings the songs once we can’t breathe the air?

There’s a moment I love in Futurama. Fry, our lovable but dopey hero who has awoken thousands of years in the future, comes upon the dusty ruin of the Statue of Liberty. He falls to his knees à la Charlton Heston in Planet of the Apes, and cries “No! They did it! They blew it up!” But then something dark and wonderful happens: the camera begins to pan out, revealing more and more ruined Statues of Liberty:

The implication is hilariously, devastatingly cyclical: history repeats itself, side by side, again and again, leading always to the same grim end. Ecocritics often call for the dismantling of our anthropocentric worldview—Futurama here argues that even if we manage to decenter humanity, the end is still nigh: once the cows get smart enough, they’ll find a way to ruin the planet too. 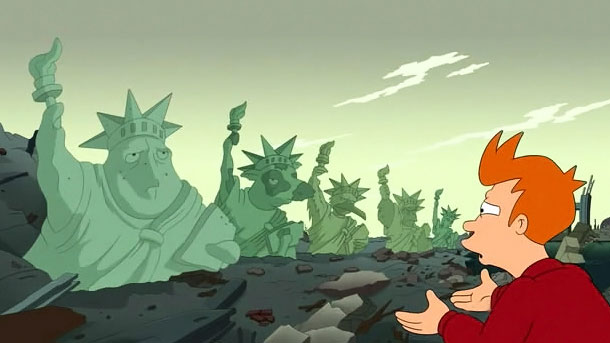 Of course, not all climatologists think it’s too late for us to make the changes necessary to keep the Earth livable for us, and it has been rightly pointed out that throwing up our hands and saying we’re fucked doesn’t do any good. I want to believe that the world’s politicos will be able to set aside their squabbles and establish real sustainability legislature. I’m hoping for the best—but I’m expecting the worst. (A pretty common attitude, it seems—just look at the nihilistic GOP Presidential Debate Drinking Game articles going around the web lately, including one from TIME!)

The first book about poetry that I ever read was Mary Oliver’s A Poetry Handbook. It’s heady stuff for a teenage undergraduate, and it made me feel that meaningful writing was at once impossible and crucial. I most remember Oliver writing:

I like to say that I write poems for a stranger who will be born in some distant country hundreds of years from now…It reminds me, forcefully, that everything necessary must be on the page.

But the poet John Skoyles has spoken of “illusions that serve me well.” That is, those ideas that, true or not, allow him to keep going. Here’s mine: I want poetry that preserves us, warts and all.

If it is in fact too late for us, then when the slug-monsters inherit the Earth or aliens show up to terraform our barren planet, I want them to know what we were, how we lived.

Maybe then they’ll feel that pang of pathos I hoped for as I beamed my stick figures into space as a boy. Maybe, as they come to know us in all our triumphs and our failings, we can be a beauty and a warning—and the ruin can end with us.

J.G. McClure is an MFA candidate at the University of California-Irvine. His work appears in Gettysburg Review, Green Mountains Review, Colorado Review, The Pinch, and The Southern Poetry Anthology, among others. He is at work on his first collection. See more: jgmcclure.weebly.com.