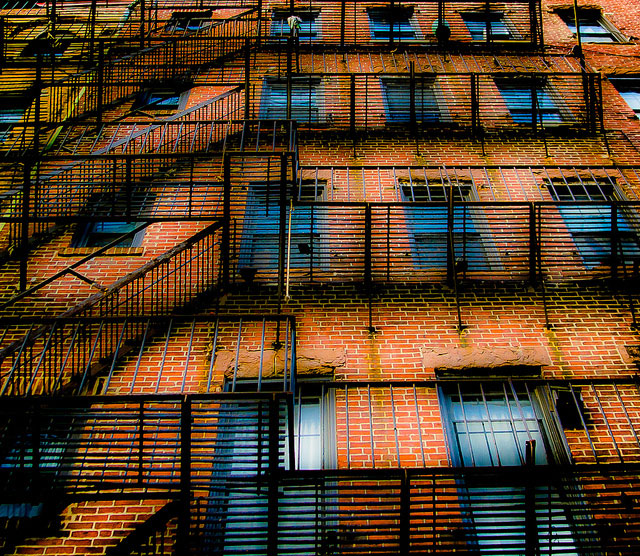 You picture it: fourteenth floor of Walker dormitory. A former wrestler dangles from a window. The one they call Bisonhead has him by one ankle and another ex-teammate, a freshman, by the other. It’s late April in Oklahoma, athletic tape scaling his shins to combat the humidity, but it’s only so long before he’ll start to slip through sweaty palms. He’s the only one crazy enough to try this and that means something. Pride is all that’s left.

This is your father.

He lost his scholarship this term. In two more weeks he’ll lose his dorm and crawl back to Sand Springs to work in the box factory, scars on his palms from fresh cardboard for the rest of his life. He hasn’t been home since high school. The state champion. One hundred fifty-five pounds.

A week after he bends Tulsa Webster’s Randy Sutcliffe into origami for the title he comes home to Mom nagging over the trash he forgot to curb before school. He says sorry sarcastically as he knows how and your grandmother slaps him, hard.

Tears gather in your grandmother’s eyes. Her jaw tightens. She does it again.

Bisonhead notes the slippage but your father won’t respond. He enjoys the aerial view: the blackjack oaks, the coeds distant and removed, unaware. He considers velocity.

This is the University of Oklahoma, where the nickname for the football coach is literally The King. The football players get the cocaine and cars, the hundred-dollar-handshakes, but they don’t know the first thing about tough. Your father likes their egos because they look at him, one-five-five, and mouth off at parties—the arrogance of royalty—and it always ends badly for them. Until the night when he and Bisonhead put two in the infirmary, including an All-American linebacker. The King is displeased.

It costs his scholarship. Bisonhead gets stadium stairs.

Bisonhead gets stadium stairs because he’s never lost a match. Because the Olympic team has wet dreams about sending him to Seoul. This has been your father’s plan, too. Until the match he becomes expendable when his kneecap pops off the tendon and bone like a champagne cork and leaves him on the mat reaching for the leg suddenly rendered Dada, a visual so wholly dislocating he submerges into aphorisms: this does not hurt you, this-does-not-hurt-you.

He feels the actual slip, Bisonhead’s palm nearing his heel, and Bisonhead says it’s time. Your father goes limp, lifeless, a boot reeled out of pondwater. He imagines falling, unaware of the daughter he’ll conceive. The little thing he’ll never be quite certain of so he’ll call you buddy, and in a fit of anger at thirteen you accuse him of wishing you were a boy. You see tears gather in his eyes.

He imagined falling. Something he never tells you until you’re home from college for the first time, a fall semester in Fayetteville so frantic you just couldn’t find the time until Christmas. In your absence, you feel his aging, know he’s reckoning with his own mortality, and it makes you consider your own for the first time. Falling. Consumed by opportunities lost. You carry these stories with you, recall them at odd times. A fourth date with a Walton-money Sig Ep who you sense being less than transparent so you step forward, direct a finger between his eyes. “You will treat me right,” you tell him. He doesn’t call again and this makes you proud, the toughness. You imagine this was what the loss of your father’s scholarship had been about—a young woman and an appropriating football player.

And again, after graduation, when you’ve been working for the Department of Child Services in Tulsa and a sorority sister takes a job in Manhattan and invites you to her apartment on the Upper East Side. You’ve never been east of the Mississippi and the city roars through every bit of you, telling you there’s more more more. But that first night she invites over her New York friends, transients like herself, for an aperitif only to snicker at the Okie drawl you’ve never been aware of until then. Blood rushes to your face and you deprecate a laugh, suddenly aware of their handbags and shoes, the Prada and Louboutin that accompany their news-anchor drone, their practiced way of being from nowhere.

During a second drink where the conversation piques and allows you to disappear you find yourself crawling out to the fire escape and listening to the city below, tormented by your inability to suppress these emotions that seem so trivial by comparison—not just the challenge to your conception of self but your daily dose of the real at DCS: the current case of a newborn thrown or dropped or what? from a moving car on Peoria as it passed the Coney-I-Lander.

The fire escape groans and you think of your father, imagine the maze of iron giving way, collapsing beneath your weight and then you’re freefalling into the rush of headlights on eighty-third and first, through Midtown and SoHo and the sweep of the plains to Steinbeck’s red and gray country and an a-frame in Sand Springs where the sweat and grease from your father’s work clothes would permeate the kitchen and mask the smell of his evening coffee. You crawl under the kitchen table and he becomes all boots and denim, his stilted stance favoring the leg with the scar. Soon he’ll move to the garage for his second shift but first he calls out to you, pitching his voice towards your room. Buddy? he calls again, less certain, and his boots turn as the porcelain mug sounds against the countertop. You keep quiet, waiting for him to shuffle across the linoleum, squat low, and draw back the tablecloth. 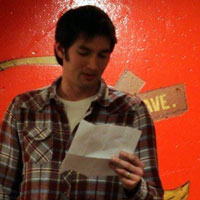 Geoff Peck received his MFA from the University of Pittsburgh and is currently a PhD candidate at the University of North Dakota, where he serves as Editor-in-Chief of Floodwall Magazine. His fiction and poetry have appeared in over a dozen journals, and in 2013 he was nominated for Best New American Poets. While not on campus at UND, he lives in New York with his wife Meredith.