The superhero is a staple of pop culture, but poets can use elements of superhero identity to craft poems and explore their own mythology. Lynn Levin offers a writing prompt designed to allow poets to reach beyond the real in search of other truths. 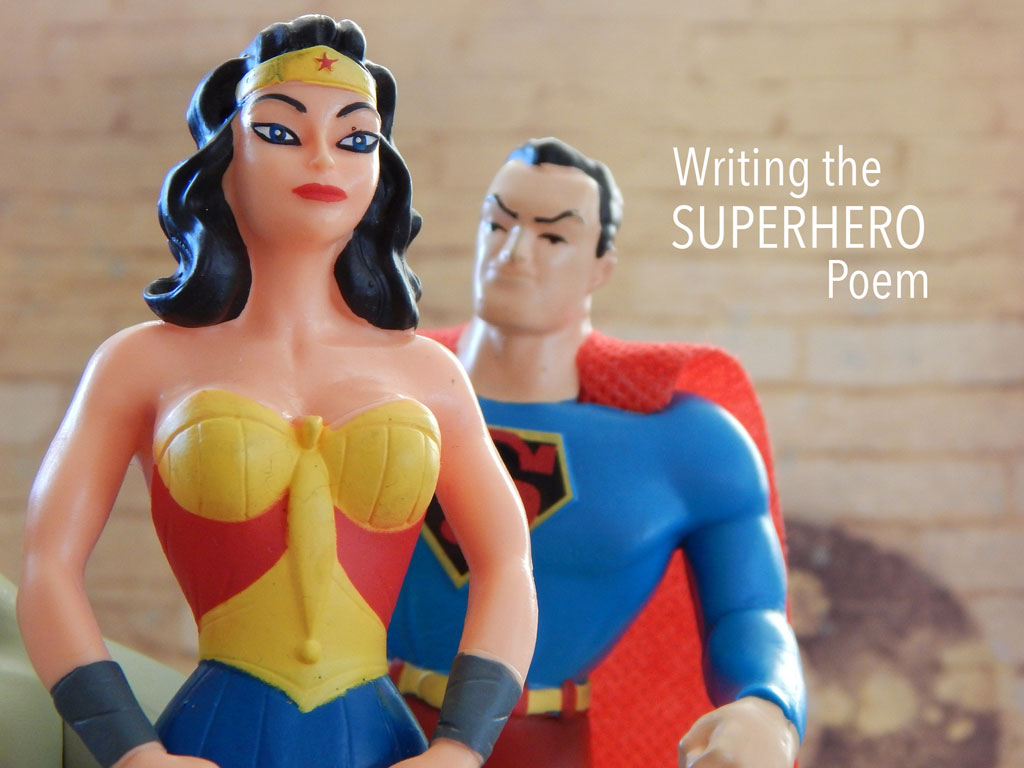 WRITING THE SUPERHERO POEM
A Craft Essay
by Lynn Levin

Gods and demigods, the superheroes of myth and legend, have provided people with drama, wisdom, moral lessons, and hopes of divine intervention for thousands of years. Thunderbolt throwers like Zeus and Thor, fierce beauties such as Athena and Artemis, super-mortals like Hercules, not to mention countless deities and folk heroes from other world traditions may be seen as the forerunners of Superman, Batman, Zena Princess Warrior, Wonder Woman, and the rest of the comic book pantheon. Anthropologists tell us that the transcendent, that sense of unearthly force, is a universal feature of human perception (or the human imagination, depending on one’s point of view). Today’s supernatural pop-cultural good guys and bad guys tie into our attraction to the transcendent. We want larger-than-life fictional superheroes to rescue those in distress, combat the forces of darkness, and entertain us. While comic book writers, TV or movie producers, and video game developers are usually the ones to rally the superheroes, poets can write superhero poems which enlist and evoke the transcendent power of myth.

Superhero poems attract poets and readers for a host of reasons, among them dreams of triumph, rescue, the restoration of justice, and a psychological fascination with the doubled self. In her fascinating essay “Poems about Superheroes,” originally published in Michigan Quarterly Review, Stephanie Burt observes that poets and readers are attracted to superhero poems both out of both familiarity and mystery: we recognize the characters, and we know what a secret identity is. Superhero themes allow poets to become fantasy writers.

Superhero poems might speak of happy victory, but they are often grim. In his poem [my neck a toothsome feeding ground    vespered swarms had drunk of me before this new batman] subtitled “a song for Robin,” (Tea, Wesleyan), D. A. Powell writes of an orphaned and seductive Robin who has affairs with numerous men as he seeks to attract his next Batman. The Boy Wonder is not fighting crime; he is looking out for his own future, hunting for his next savior but not in the name of love and partnership. His quest is ruthless, based on survival.

Another dark superhero poem comes from Lisa Prince, a poet and writer from Southern Ontario. In “Icarus’s Daughter,” Prince borrows from the classics but wings away from the traditional myth of the overreaching and doomed Icarus. Here the daughter of the tragic figure tries to be human in the face of legend; she struggles on after things fall apart.

She had not longed
for flight, despite the wings
she’d been given.

Between her toes, sand.
Every call she heard was ocean.
Every step she took was wave.

Her fingers, nimble, plucked
those vibrant feathers one by one.
Hope to a stranger. Faith
to a bride. Peace…

In the empty spaces of her
wings, nothing grew. Pale skin
turning paler, sicklier.

The song was clearer
now that she knew. It was
those wings binding her.
Those wings…

…spread against the morning
sun, leaving her translucent, standing
atop a crested hill, overlooking

all she needed to do

The family tradition for self-destruction moves Icarus’s daughter to pick apart her wings and plunge into the sea. This suicidal fall is very much the opposite of what we usually think of when we think of soaring comic book heroes.

I experimented with a superhero prompt in a recent poetry writing class at Drexel University. The prompt proved effective far beyond my expectations. The superhero prompt appealed to the students’ familiarity with and delight in pop culture, and it encouraged them to write through a persona. Some students created mighty warriors. Others celebrated very down-to-earth champions, such as working mothers or superheroes in itchy costumes.

Here is the superhero poem prompt:

Write a poem about a superhero you are fond of or who excites your imagination. This might be a character who comes to your rescue or the rescue of others. The character might restore justice, overpower evil doers, or make the world a better place. On the other hand, the superhero might cause trouble. The character might accomplish amazing feats or more modest feats. You can write about a traditional figure from myth or contemporary pop culture, or you can invent your own superhero.

After I explained the prompt to my students, I shared a few poems from Jeannine Hall Gailey’s Becoming the Villainess (Steeltoe Books), a collection of superhero persona poems. In her book, Gailey includes poems that focus on characters from fairy tales and Greek mythology as well as some superhero figures of her own making. The samples from Gailey combined with the students’ own familiarity with mythology, comic book, and other media superheroes, as well as the students’ eagerness to speak through a mask helped them generate vivid poems.

The prompt proved liberating in many ways. Surprisingly, none of my students wrote about existing characters from myth, legend, or popular culture. These college poets all made up their own superheroes who spoke to their fears and desires. Often the poems starred regular people, such as the previously mentioned working mothers, whom the writers held in high esteem. The exercise led many students to write poems with more action, more story, and more character development than they would normally do.

In this poem by English major Amberlyn Wilk, the superhero is a glamorous and angry protectress of young women.

She protects the streets with her winged eyeliner on point
so women can go out at night without pretending to talk on the phone.
No more evil lurks around the dark corners when she’s patrolling.
Ladies no longer speed walk home with keys carefully placed between their fingers.
There are no more tiny pink cans of mace squeezed
Into the teeny little pockets of their skinny jeans.
They don’t need to call an escort because she is there—
The invisible escort is always with them.
And you know she won’t break any of her French tips
When she destroys any predator who may be prowling the streets.
She is something that the law could never be,
What the women of the world have been crying out for.
She is a there to make sure that 1-in-5 stat disappears
Because she can see that the wolf whistles in sheep’s clothing.
No longer will a woman leaving the house after 9 pm
Be playing a dangerous game of Russian roulette because she is there.
She is there to make sure that no more women
Sleep with a knife under their pillow.
She knows that
Christine wasn’t wearing the wrong clothes
and Katherine isn’t just a loose slut
and Amy’s silence did not equal consent
and Brooke didn’t lead him on
and Sophie didn’t enjoy herself at all.
And she knows above all else that none of them were asking for it.
The system has failed them
But she never will.

In contrast to Wilks’s fierce avenger, computer science major Andrew Yaros created a mild-mannered comic superhero who uses the power of pun making to lighten the burdens of mankind.

Every day, I tell myself
This curse isn’t worth it,
This burden is more than I can carry,
Why has this responsibility been thrust upon me?

But we live in horrible sick society,
A society without puns
And someone needs to make them,
And that someone is I.

I’m compelled to make puns
No matter the time or season,
And even when I write poetry
I make puns without rhyme or reason.

And every day, I carry my burden.
I create puns whenever I can,
Even if no one will hear them:
It must be done for the good of man.

I live in fear each day,
Knowing the world will lapse
Into chaos, famine, and nuclear war
If I neglect my duty for but one minute.

It is the hell I live in,
But it cannot last forever:
One day I may need to have a son of my own
To pass the torch to, as my father did to me.

The superhero poem prompt, obviously, can be broadly interpreted. My students’ superheroes sometimes swooped the skies, and sometimes they were fierce, but more often they were humble souls, very human, and friends to mankind. Traditionally good characters can take on questionable roles. Conversely, superhero poems can serve to redeem or re-envision mythic or comic book figures who have been saddled with a bad reputation. I have written a series of poems about Lilith, a figure with roots in ancient folk tradition, who, non-biblical legend has it, was the first wife of Adam. Lilith has suffered a very bad rap in legend, but my mission has been to humanize her and be kind to her. For example, in one of my poems, Lilith goes shopping with Eve at Macy’s.

We love superheroes because they are exciting and because they fulfil our wishes for power, vengeance, justice, rescue, and other goals that seem beyond our reach. In poetry, they also turn out to be powerful muses.

Prince, Lisa: “Icarus’s Daughter” appears by permission of the author. The poem was first published in Prince’s Sign Language (and other hand signals), a chapbook in the November 2006 issue of Lily: A Monthly Online Literary Review.

Wilk, Amberlyn: “The Raging Bitch” appears by permission of the author. Copyright c 2017 by Amberlyn Wilk.

is a poet, writer, translator, and teacher. Her work has appeared in Cleaver Magazine, Michigan Quarterly Review, Per Contra, Painted Bride Quarterly, Boulevard, and other places. She teaches at Drexel University and the University of Pennsylvania. Her website is www.lynnlevinpoet.com. The second edition of Poems for the Writing: Prompts for Poets (Texture Press) by Valerie Fox and Lynn Levin is expected to be published in 2018. “Eve and Lilith Go to Macy’s” and Levin’s other Lilith poems may be found here.

BIRDS ON THE KISWAR TREE by Odi Gonzalez translated by Lynn Levin reviewed by J.G. McClure