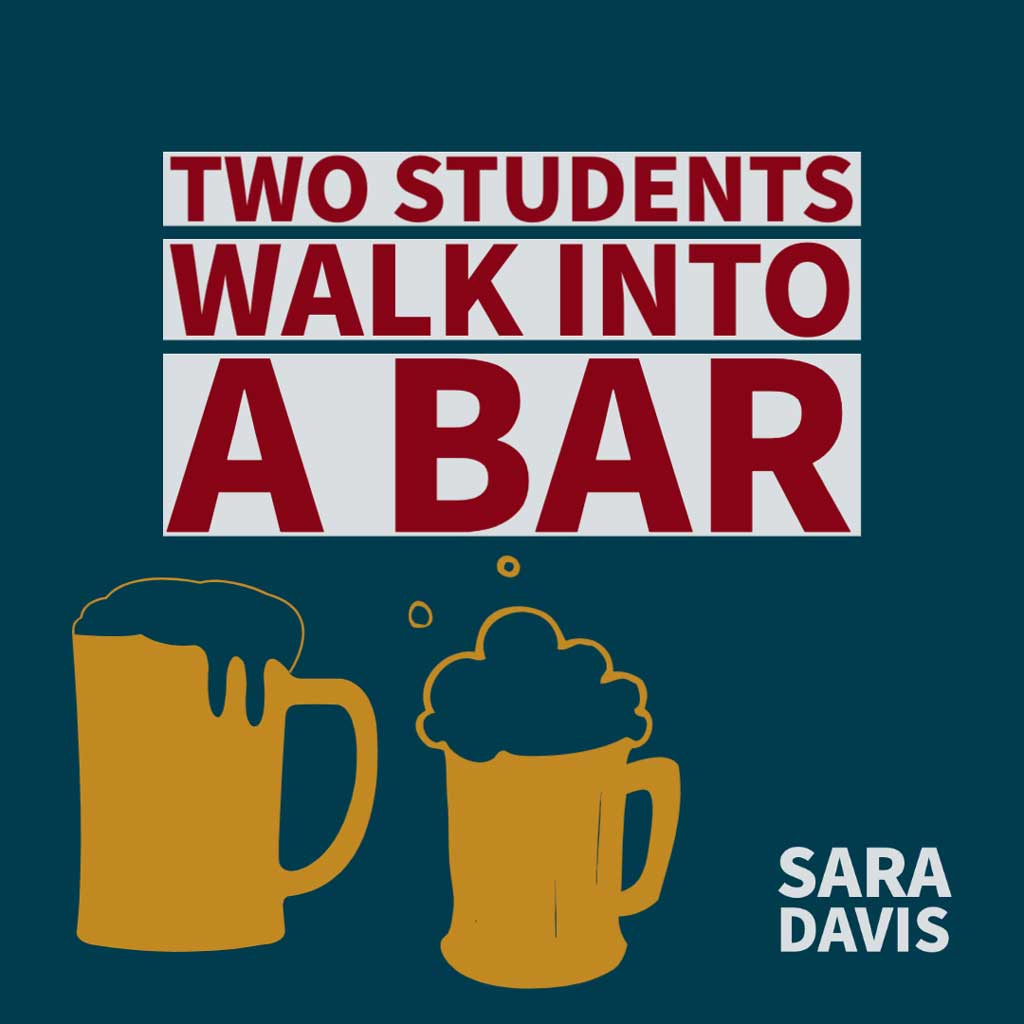 TWO STUDENTS WALK INTO A BAR
by Sara Davis

I can’t believe you haven’t heard this story. I feel like we tell it all the time! Maybe not in class, no, but grad school isn’t all lectures and bad coffee. We do have fun sometimes. Anyway, Lee and I used to come here all the time in our first year, because on Thursdays they had pierogies for fifty cents apiece and we’d have money left over for nasty beer, except I think this happened on her birthday so maybe it was nasty rum instead. I’m sorry, I don’t know if I should try to tell this story without Lee, I’m not going to remember it right. Well, anyway, we were sitting up at the bar over there having some kind of intense conversation. I think it was when we were planning on co-teaching a class about rape culture—I told you, we know how to have fun. So we were just talking with our heads together when out of nowhere this guy thumps down right next to her and says “Hey, you, have either of you read any Russian literature?” I know! Not even an excuse me! He wasn’t from our program. I remember he had really long hair down to his waist, but otherwise he just looked like a guy. Anyway, yes, of course we’ve read Russian literature—not all of it, obviously—but in any case that’s not his business. So we turn away and try to find the thread of our own conversation, but next thing he started in talking about the Frankfurt School. I truly don’t know. Maybe he’d just read a book about it, or maybe he really loves critical theory and that’s always how he chats up strangers. What was funny, though, is that Lee and I had just turned in our papers for that first-year course on critical theory. We could talk about Althusser all day. Even though he did strangle his wife. Maybe that’s the class we should be co-teaching: all the philosophy guys who killed their wives. So this guy started talking to us about ideology, and I was trying to catch Lee’s eye like, is this okay? Are you okay? I mean we were still getting to know each other then, I didn’t know if she would enjoy the attention, but it was her birthday and she was still talking about interpellation, so I tried to be chill. When you get to critical theory next term, you’ll see how Althusser describes interpellation: if a policeman says “Hey you.” to a person walking down the street, that person—regardless of how they feel about it—is transformed into a subject of the state. Maybe when a guy says “Hey, have you read any Russian literature?” to women at a bar, they are incorporated into his own ideology, like they’re not people in their own right but mirrors reflecting back his own self-image. Or so he thought, but Lee was verbally batting him around like a cat with a mouse and he was getting more and more agitated. So finally the guy asked Lee what she wanted to do, like when she grew up I guess, what she wanted to do for a job. And Lee said she wanted to teach, because that’s the dream, right? That’s what we all come in wanting to do. And the guy, who was pretty worked up by this time, slammed his hand on the bar and roared “That’s bullshit!” And Lee said, “I’m sorry?” Because that’s what women do, isn’t it? A man walks into a bar and says ouch; a woman walks into a bar and says I’m sorry. And I leaned across her and said, “Did you just call my friend’s vocation bullshit?” And he said, “Yes, your job is to tell people what to think, and that is bullshit.” I know! So funny. Like sure, yes, we are tools of capitalist indoctrination, and that’s why we are celebrating Lee’s birthday by pooling our quarters for all the pierogies we can eat! And, okay, Althusser does not believe in the liberating potential of education, but if education is oppression then what do you call bothering women with philosophy at a bar? Not that we are giving much weight to Althusser’s opinion of how to talk to women; I did say he killed his wife. Find me a philosopher who was a good man, though. Like everything else, we take the parts that are useful to us and leave the rest. Anyway, I’m sorry, I’m so bad at telling this story. I don’t remember telling the guy to leave, but Lee says that’s what I did. Like: that’s not what teaching is, and also that’s not what ideology is, goodbye. But the man must have said “That’s bullshit!” a few more times, because for the rest of the year Lee and I would yell “THAT’S BULLSHIT!” and collapse into laughter. But he did leave and the bartender gave us each a plastic token for the entertainment. I still keep it in my wallet. It was supposed to be good for a lifetime discount but the new manager won’t accept it. You missed a chance there to say “That’s bullshit!” But the pierogies are still fifty cents on Thursday, and they come with a whole basket of condiments, so you can really make a meal out of them. You’re welcome. That’s what I’m trying to tell you: in this program, we have to look out for one another. 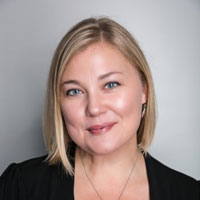 Sara Davis (@LiterarySara) is a recovering academic and marketing writer who lives in Philadelphia with two elderly cats. Her PhD in American literature is from Temple University. She has previously published flash in Cleaver Magazine, Toho Journal, and CRAFT literary magazine, and she currently blogs about books and climate anxiety at literarysara.net.