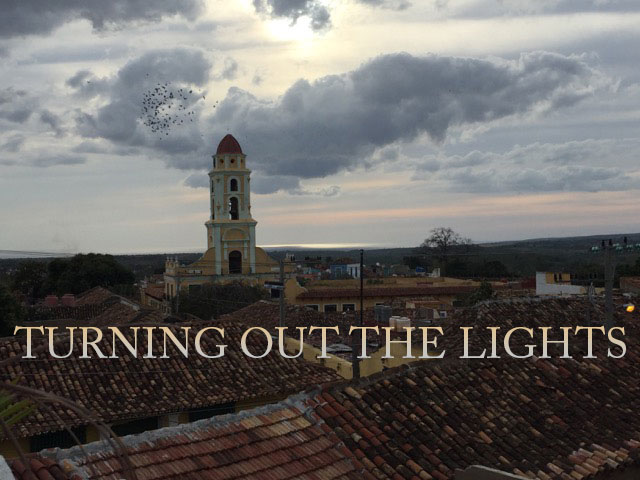 TURNING OUT THE LIGHTS
On Cuba, Writing, and the Ecstasy of Planetary Topography
by Tim Weed

The blackout was a revelation. It happened at around eight PM, in Trinidad, Cuba, on one of those moonless tropical nights that fall so suddenly you barely notice the dusk. This was several years ago—before the loosening of travel regulations that occurred under President Obama—and the number of American tourists remained small. In common with many others who’ve dedicated their lives to the dream of producing enduring literature, I’ve had to make my living by other means. I was a Spanish major in college, and through a series of happy accidents I ended up developing a parallel career as an educational travel guide with specific expertise in Cuba. Before the resumption of diplomatic relations, organized cultural travel programs provided a highly sought after legal method for Americans to travel to the country, and my knowledge base was much in demand. At the time of the occurrence described in this essay, I was traveling to the country with cultural tourism groups at least half a dozen times a year.

Trinidad is a UNESCO World Heritage Site, a remote city nestled into the base of the Sierra de Escambray mountain range, overlooking a notably depopulated part of the Caribbean. For much of the Spanish colonial period it was a wealthy sugar capital, but in the second half of the nineteenth century—with the end of slavery and the economic devastation that came with the wars for Cuban independence—the city entered a long period of desperate poverty and near-total isolation. This period only ended with the construction of the first highway linking it to Havana in the 1950s, and the triumph of the Cuban Revolution in 1959 ensured that Trinidad, along with the rest of the island, would remain closed off from the main currents of the late twentieth century world economy. As a result of all this, the city is a living time capsule. Horses clop along the cobbled pedestrian-only streets in the hilly upper reaches of town. Through the wood-grated windows of the high-ceilinged colonial houses one can still see the original nineteenth-century furniture. In a few of the interior courtyards horse-drawn buggies remain parked, as if waiting for their owners to come back and rig them up.

Cuba is not a brightly lit country to begin with. The electrical system is antiquated, and although blackouts are less common now than they were during the deep economic depression that followed the collapse of the Soviet Bloc in the 1990s, they do still occur. Trinidad is far removed from any other source of ambient light, so even without a blackout, on a moonless night, the stars emerge in a brilliant textural canopy.

When the electricity cut out I was “off the clock,” eating dinner on my own in one of the dozen small restaurants near the Plaza Mayor. There was a moment of cave-like blackness accompanied by silence. Then the quiet conversations around me resumed, and a few candles flickered to life in the surrounding establishments. Before long the center of town was dotted with spheres of trembling amber light. A horseman trotted by, the iron-shod hoof-beats ringing clearly across the square as if to complete the illusion of having traveled backwards in time.

Finishing dinner, I wandered out to sit on the coral-stone steps of the cathedral. A pleasant breeze blew up from the sea. The steps still radiated the warmth of the tropical sun.

Well, before I can describe it, I have to explain something about my state of mind. Making a living as an international travel guide may sound like a sweet gig, but like any other repetitive job, it can get old. You’re always “on,” for one thing, which is a daunting prospect for an introverted writer: Imagine hosting a nine-day cocktail party. Then there’s the boredom of following the same crowded itineraries, meeting with the same interesting locals, and participating in the same festive activities year in and year out. In my personal life I treasure the opportunity to be active, but most high-end cultural programs are surprisingly sedentary, featuring long air-conditioned bus rides, a great deal of passive spectating, and twice daily, multi-course group meals in five-star restaurants. So even though my “day job” was bringing me to some of the most interesting and picturesque places in the world, I was only half-experiencing them. I was preoccupied with logistics, small talk, and the draining, insincere gregariousness the host role demands. My off hours were spent walking in numb distraction, dining alone at a familiar bar, or hiding behind potted plants in a hotel lobby checking my email. I’d become jaded.

This gets us back to the blackout—and the revelation I had while sitting on the steps of the cathedral in Trinidad. After my eyes had adjusted to the darkness, I was suddenly overcome by a sharp awareness of my relationship to the physical landscape. Not just the abstract knowledge of where I was geographically. Not the conjured image of a point on a map, nor even a self-conscious awareness that I was sitting in a socio-politically unusual location: a remote, historic World Heritage Site in a poor region on the south-central coast of the western hemisphere’s only communist country. This was different. Suddenly, I had a visceral sense of my exact location in the three-dimensional topography: sitting at the head of the cobbled plaza at the center of a centuries-old town, at the base of the towering karst mountain range that formed a jagged ink-black wall in the night sky at my back, on a sort of elevated shelf overlooking a tropical sea that glittered faintly in the distance beneath the overspreading stars.

The intensity of this shift in perspective took me by surprise. All at once I’d recovered a sense of connection that I hadn’t even realized was missing. It was a big, reassuring, exhilaratingly physical feeling of communion with the land and the sea and the universe of stars.

When the electricity came back on, the three-dimensional majesty of the nighttime topography evaporated, leaving me with a sense of emptiness and loss. We’re used to blaming our technological gadgetry for keeping us at arm’s length from what we call “real life,” but for me, the blackout was a reminder that the problem goes deeper than the latest generation of smartphones. Electricity itself—that clever sine qua non  of advanced industrialized society—is a force that imprisons us, because it prevents us from seeing out into the darkness. The live current we’ve tamed and channeled may provide a reassuring background buzz, but it keeps us from experiencing the sublime truth of the material universe and our precise location within it. 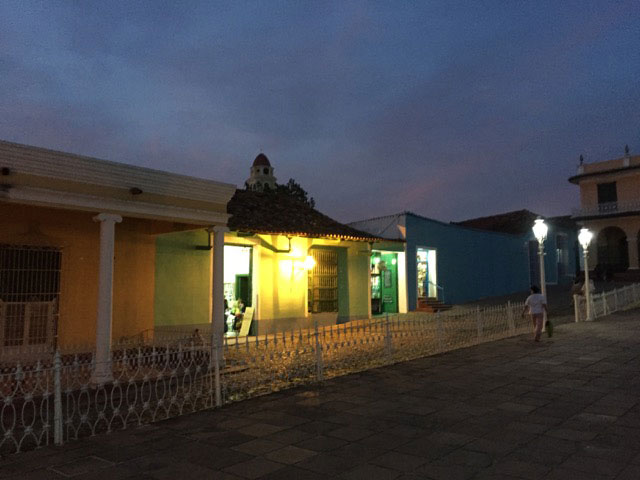 Absent fortuitous blackouts, depending on the kind of person you are, receiving this kind of visceral reminder of the true nature of existence may require either drugs or a deep-seated commitment to silent meditation. Wilderness camping might do it for you, as it often has for me, especially for multiple nights in a row. Even for a brief time, immersing yourself in one of out planet’s sublime landscapes is also a good bet. I’ve had moments of heightened awareness blossom back into my consciousness on hikes in the red rock deserts of the American southwest, on skis in snow-blanketed Rocky Mountain conifer meadows, and sitting at the rail of a small ship cruising through the Beagle Channel as the jaw-dropping peaks and hanging glaciers paraded magisterially by. If you haven’t been fortunate enough to experience one of these jolts recently, it’s possible that you may have become jaded. As with any rigorous pursuit, unused muscles can atrophy. Sometimes you have to exert your willpower to rekindle the connection.

And this is where writing comes in. I once heard the poet David Baker say that literature can be divided into two categories: the ironic and the ecstatic. Ecstasy is transcendent, mystical, implying a state of trance, vision, or dream. Irony, on the other end of the continuum, is social, worldly, rooted in the intellect. In blackout terms, irony is electricity, and ecstasy the unmediated tropical night.

Irony is essential in literature as an antidote to sentimentality, but in my view the most immersive writing is to be found on the ecstatic end of the continuum. When we write, we want the reader to forget all about those black marks on the page and tumble headlong into the narrative as one would fall into a trance. Good descriptive writing is what triggers this loss of conscious control, this benign fugue state; it’s what puts the vivid in John Gardner’s “vivid, continuous dream,” and it’s my belief that in order to produce good descriptive writing a writer must, at least intermittently, have access to something analogous to my blackout revelation. She must be able to turn off the electrical currents of irony and intellect and connect to the surrounding world in a way that is intuitive, instinctive, and ecstatic.

These days, if I happen to be talking to a group of aspiring writers, I may be tempted to give them some version of the following advice. Close your laptop. Turn off your smartphone. If you’re lucky enough to find yourself in a blackout, don’t forget to look up and notice your surroundings. And if there’s no blackout, just turn out the lights. 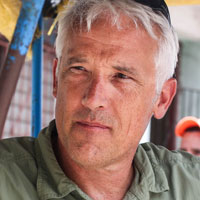 Tim Weed is the winner of a Writers Digest Popular Fiction Award, and his first novel, Will Poole’s Island, was named one of Bank Street College of Education’s Best Books of the Year. Tim teaches at GrubStreet in Boston and in the MFA Writing program at Western Connecticut State University, and is the co-founder of the Cuba Writers’ Program. His new collection, A Field Guide to Murder & Fly Fishing, was a finalist for the 2017 International Book Awards (Short Story category).