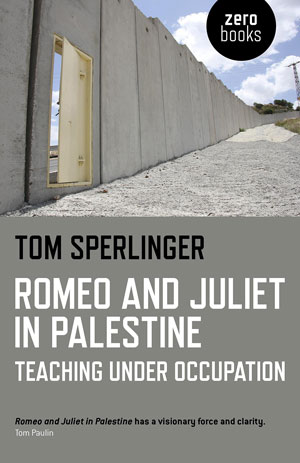 Trust the Brits to find the humor in anything. Tom Sperlinger’s Romeo and Juliet in Palestine, a brief memoir of a semester the author spent as a visiting professor of English literature at Al Quds University in Abu Dis in the West Bank, deploys wry wit to combat the absurdities of living and teaching in a place of controlled chaos. Take this retelling of an exchange between Sperlinger and a security guard at an Israeli checkpoint:

I didn’t think this was a question I could answer.

At Al Quds University, Sperlinger’s students remain dubious about the benefits of the courses he offers; they want to learn the English language, but feel profoundly disconnected from English literature. On one of his first days at the office, Sperlinger encounters a student who actually likes studying English literature, but doesn’t like the department. “If you were head of the department, what would you change about it?” he asked her. Maybe she would provide valuable insight.

She thought for a second, and then spoke in a deep, even tone. “I would close it,” she said.

This general sense that students and others he encountered in Palestine didn’t know what to make of Sperlinger and his point of view pervades the memoir. When Sperlinger gives a talk at Al Quds, the professor who introduces him, who is not a literary scholar, notes, “I am sure this will be a very interesting talk. I don’t know anything about George Eliot, but I do know she was a Zionist.” 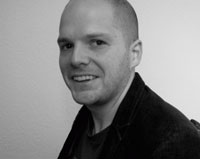 Sperlinger’s keen feel for the absurd provides much-needed relief in an often grim story. If, like me, you don’t know much about the Israeli occupation of the West Bank, this memoir will open your eyes to Palestinians’ perspectives on the conflict. Sperlinger, whose grandparents fled Vienna in 1938 to escape the Holocaust, is quietly appalled by what his people on the West Bank endure. As he sees it, “Palestinian lives are disrupted in endless small ways, day to day.” His students face drawn-out commutes to the University (thanks to checkpoints) and constant interruptions of their studies from strikes, protests, and faculty pay freezes. Because various legal regimes maintain jurisdiction over different parts of Jerusalem and the West Bank, some students are effectively divided from family, friends, and even lovers. And because of a strange technicality in how Israel accredits Palestinian universities, Al-Quds degrees are worthless in Jerusalem. Still, there are much bigger disruptions. In one assignment, Sperlinger asks his students to retell a family story or folk tale and analyze it using the literary techniques the class has been studying. The resulting narratives are chilling for the reader: a grandfather publicly executed for possession of a gun, a seven-year-old killed for throwing rocks, a father used by soldiers as a human shield. When, at one point, a student asks Sperlinger if he’d like to see a picture of her brother and he agrees, she shows him a wanted poster.

Despite the challenges they face—indeed, Sperlinger suggests at points, because of them—the students offer fascinating insights about the texts they read in class. Part of this is surely as a result of Sperlinger’s sensitive and talented teaching. In a conversation about how Shakespeare adapted the Petrarchan sonnet for an English audience, Sperlinger makes the lesson concrete, telling the students, “I want you to imagine that I am a musician. . . . I’m visiting from England, and I have brought this new kind of song with me, which everyone in England is playing. You’re a group of musicians too. But you haven’t heard of this song, and when I play it, you want to start making your own version in Arabic. How would the song change?” He allows his students great freedom of thought, telling them that “they should not take for granted that [Shakespeare’s] works were great or special. Their job, as readers, was to discover whether he seemed like a great writer to them.” And yet the students don’t always (or perhaps even often) do the reading. Sperlinger responds by giving them an excerpt from Malcolm X’s autobiography, where the Civil Rights leader famously explains how reading opened the world for him; then he distributes a French novelist’s “Readers Bill of Rights” and asks the students what they would add or subtract. At times, understandably, he grows frustrated with the students and wonders whether he should be stricter; just at that point, one of his best students explains, “I’ve been at the university for five years. I’ve never been asked to do this before—to come and have opinions, to do the reading only if I want to. . . . It’s just a big change.”

While anecdotes like this one are rich in meaning, the book is sometimes frustrating to the reader. Sperlinger has unusual pacing; sometimes he stretches stories out over a dozen pages, doling out a little bit of information at a time, digressing to another topic, and then spiraling back to something he let drop. This can create a productive sense of foreshadowing. For instance, in the powerful first chapter that gives the book its name, Sperlinger intercuts shreds of ominous violence with his students’ responses to Shakespeare’s tale of two warring houses, to profound effect. Other times, a story simply gets abandoned; the reader waits in vain for a payoff down the line.

More fundamentally, Sperlinger doesn’t have much material to work with; a single semester is not a lot of time to fully understand his students or his environs. Still, Sperlinger wisely refrains from spinning his tale out for longer than it warrants. At 144 pages, this novella-length memoir flies by. And just as Sperlinger arouses his students’ curiosity about literature, he whets ours for a greater understanding of a people whose oppression is too often overlooked or misunderstood. More, Sperlinger made me want to read or reread not just Shakespeare but Edward Said, Malcolm X, Charlotte Perkins Gilman’s “The Yellow Wallpaper¸” Kafka’s “The Hunger Artist,” Irish and Palestinian poets, Israeli playwrights—and, indeed, whatever Sperlinger writes next.

REALLY THE BLUES, a memoir by Mezz Mezzrow and Bernard Wolfe, reviewed by Beth Johnston

FAR COUNTRY: STORIES FROM ABROAD AND OTHER PLACES, essays by Timothy Kenny reviewed by Beth Johnston