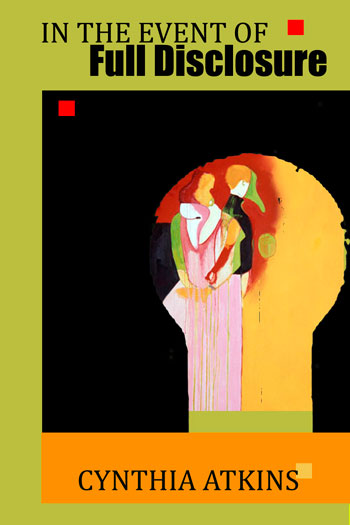 IN THE EVENT OF FULL DISCLOSURE
by Cynthia Atkins
CW Books, 95 pages

Questions about the past, memory and legacy interlink with everyday images that haunt the reader in Cynthia Atkins’s second volume of poetry, In the Event of Full Disclosure. Atkins’s poems arch into a tree extending way beyond herself, into family, society, and community, while inviting the reader to share in her concerns. If there is wholeness and power to be achieved, the poet seems to be saying, it is recognizing one’s humanness and interconnectedness.

Separated into five parts, titled Family Therapy (I), (II), and so forth, In the Event of Full Disclosure is dedicated to Atkins’ sisters. Both humble and ambitious, the poems explore a complex legacy of familial relations with sharp images behind whose façade the reader senses stress and disequilibrium, as in “Picture This” in Part I:

Three sisters just from swimming,
bathing caps, fresh cut bangs—
sitting at the pool’s edge. This safe notch
in time hailed like a taxicab in the rain,
and memory makes it sedate
as a lawn chair, quelled
………..and awash in Technicolor.
Think picket fences. Think polka-dot sundresses.
Smiles and lemonade implied
for later the same day. Imagine the mother
in tortoise-shell glasses. She never gets wet
above the waist, keeps her petite figure
………..Like a secret thing at the back
of the drawer—for future reference.

Atkins finds meaning hulling the past for truth, for lessons and acceptance, but knows better than to believe in memory’s imprints, which can deceive. She wants to go beyond photographic poses and good memories, to what lies behind them—family secrets that must be told. How can we know the entire truth without unveiling the obscured, speaking the unspoken? In looking at her family, Atkins deals with the complicated reality of living with a family member with mental illness—in her case, a sister. In interviews, Atkins has said that she came to write about mental illness because the subject picked her. “Family Therapy (II)” opens:

We ignore the kinship of strangers
because we are seamed and stitched
together—our canopy for the long haul.
………..This pathos has static and is stuck
like the plastic covers in the photo albums.
We are composed of posed facts
and time eludes us with
………..Country Club smiles.

A master at utilizing diverse influences—formalism, postmodernism, surrealism—Atkins is at once a poet’s poet and a poet for everyone, challenging the reader to look beyond her fresh word play and metaphor (that often take surreal and unexpected turns) to their multiple meanings and relations. In “Disclosure,” she connects the tools of language to an everyday whose very essence seems unascertainable:

From where I stand

the stairs creak with light

replete with magic. Or mischief?—

My hands are pulled by a theatre

iambs, where sounds are words

In writing about what moves her as a human being and as a woman, wife, mother, sister, and daughter, Atkins expands the thread of the domestic to include many worlds, incorporating family, tradition, culture and its legacy. Looking back for the poet means recognizing complexity and contradictions. In one of the most compelling poems in the collection, “Vacation,” Atkins relives a family memory that is also collectively remembered as the day Martin Luther King Jr. was killed:

Suitcases packed, the dog carted off—We piled in the
paneled Station Wagon holding tight to our dream pillows.
A week-long life-style. The open road stretched out,
warm as comfort food. Rid us our ruts, our tangled roots—
A whole system concocted for consoling our wounds.

The theme that we are all connected to systems, even in sacred ways, echoes in “The Ties That Bind.” In this poem, Atkins explores the disorientation triggered by technology, which brings us closer even as it connects us to the incomprehensible at large:

At the tipping point, breathe deep,
listen to the argument
…………of the human drone
like a warehouse of foghorns
or a chorus of seamstresses
…………lined-up in a row.

Here is language reaching beyond itself, creating unlikely, often surprising, associations in order to make sense of the incomprehensible and unfathomable. We are stranded with our lot, Atkins seems to say, but we can look back and find in the rubble a key to the future, to moving forward. We tell our stories, although our voices are distorted through machines—the answering machine, the telephone, the television. Although there is havoc wherever we look, there is also faith, mystery, hope—lamps, pens, note books—helping to unravel mysteries and create meaning out of the madness.

In the Event of Full Disclosure charts the connections and disconnections of a life fully lived, a poet completely engaged in every aspect of her life, telling stories about it in the hopes of easing the collective burden. These are poems not of the world, but happening in them. And here is a poet generously posing questions to the reader while inviting her into her experience.

Arya F. Jenkins is a poet and writer whose work has appeared in numerous online and literary journals such as Agave Magazine, Brilliant Corners, and The Feminist Wire. Her poetry and essays have been included in three anthologies. Her Buddhist poetry chapbook, Jewel Fire, was published by AllBook Books. She writes jazz fiction for Jerry Jazz Musician. She is also a teacher of fiction and creative nonfiction, which she taught at Fairfield University for six years.