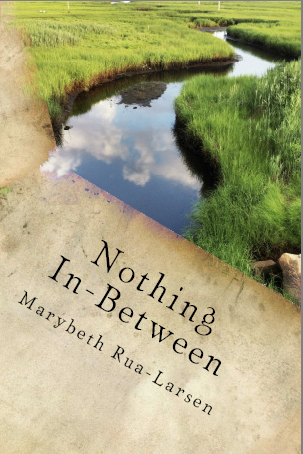 NOTHING IN BETWEEN
by Marybeth Rua-Larsen
Barefoot Muse Press, 58 Pages

Fairy tales often have at least two versions: the Disney translations, in which everyone signs and good guys have perfect teeth, and the Grimm incarnations, which feature visceral heart extractions and frequent attempted murder of young girls. We often study fairy tales to examine what messages they convey about gender and voice; in her collection, Nothing In-Between, Marybeth Rua-Larsen offers alternative interpretations, both of the tales themselves and our reasons for telling them.

The theme of rescuing runs throughout most fairy tales, making it an apt opening for the collection. The poem “The Rescue” offers a change in perspective on the theme as seen in “Rapunzel.” In this poem, we don’t see the princess as just waiting around to be rescued; rather, she is making a conscious, informed choice. She could cut her hair and end her torment. She could die and end the witch’s power. She chooses instead to live, and to love her hair as a lifeline, a tether to a potentially better future. In this light, Rapunzel becomes a feminist, examining the situation and deciding for herself which path is the right one for her.

Rua-Larsen also addresses the idea of the happy ending. In “It Isn’t What I Thought,” she explores the passage of time in relationships. Happily ever after isn’t a fade to black after the wedding, nor is it a fading of passion with advancing age. “Menopause is freeing,” she reminds us—isn’t sex better without the burden of contraception? Then again, perhaps there are no happy endings at all. In “The Grimm Girls at 45”, we see post-credits renderings of several princesses: Sleeping Beauty has taken advantage of her re-ennervation by working her way through nameless partners and baking, Snow White is a non-recovering alcoholic and Rapunzel is a cougar with a plastic surgery obsession. Don’t believe the happy-ending hype.

The “Daughters of the Playground” section focuses on what happens to feminists who grew up on fairy tales. “Upstate, 1992” speaks to professors who follow the student-empowered model (how often do we get to see Pedagogy of the Oppressed referenced in poetry?) When we erase boundaries and make the classroom a space in which students’ truths and experience become a valid and necessary part of the process, we learn how little we all really know outside of our own skin. If you are a woman comforting a young man whose girlfriend had an abortion, you get the unique opportunity to know “feminism from its other end.” “Ant Trap” shows us what a tremendous maze of responsibility it is to be the mother of a daughter. The poem explodes a small, frustrating moment: an infestation of ants purposefully lured inside by a pair of curious girls. The speaker must decide between admiring / allowing their brilliant creativity or following her own likely desire, conforming to the model set by generations of mothers past, exterminating both the ants and a bit of her girls’ spirits. The speaker chooses to “join the party on the floor,” to see what they see, which signifies both victory and defeat.

“Story Girl” hearkens back to the first story women tend to hear of women: that of Eve. How do we teach daughters to believe in their own strength, to use their voices and stand behind their words when the mother of all is referred to as a “frail mind [that] called down the weight / of boulders on our backs?” How do we teach against a millennia of narrative?

Rua-Larsen ends the collection with the section entitled “Make It Come Calling” that speaks of love and loss. “Lovesick” uses a speaker who plays lightly with language while clinging to a leaving love: “your note makes leaving a cliché / so stay.” Pretend, the speaker implores, that the dying relationship still works. We don’t extoll happy endings anymore, so don’t leave in search of something more; stay, and pretend. This, too, is a rejection of fairy tales, circling back to the theme of “It’s Not What I Thought.” Once we reject the notion of perfection, we are left with what is real and what is possible.

The stories we read as children—the stories we tell our children—often conflict with the ideologies we embrace as adults. Rua-Larsen’s collection reveals the effort required to revise our perceptions and reshape our understanding, both of ourselves and the worlds we inhabit.

Shinelle L. Espaillat writes, lives and teaches in Westchester County, NY. She earned her M. A. in Creative Writing at Temple University. Her work has appeared in Midway Journal.