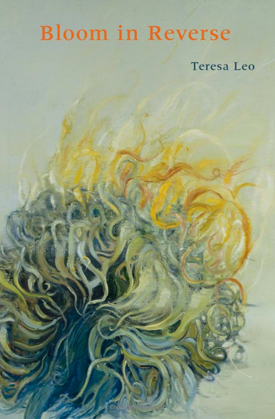 From the dedication page, Teresa Leo’s  Bloom in Reverse props itself against the fence between the living and the dead. Dedicated to the living but in memory of Leo’s friend Sarah, the poems carry the dual burden of trauma and memory. How do we process, how do we articulate trauma? If we’re at all like Teresa Leo, we recognize that in art, in poetry, we remember the the Sarah Hannahs of the world and bring them into a collective consciousness. She is not forgotten.

Donald Hall wrote an astounding collection of poems chronicling his wife’s cancer and death, Without. Bloom in Reverse reads much like that collection—in each poem, we feel the keenness of the “without,” the strain of recollection, the reconstruction of the smallest moments of friendship and intimacy in the clearest language accessible to the speaker. Many of the poems are two-line stanzas, heavily enjambed and riddled with fragments, clauses that build and build on each other only to be let go in a kind of sigh—we feel the struggle to hold onto whatever memories come to mind, only to realize that that’s all they are. The ending of “She Said: It’s Not that Things Bring Us to Tears, but Rather, There Are Tears in Things” struck me as the most poignant of these conclusions:

a crude eradication that paints me still,
that which I must not think about fully

or for too long — heat, stress, vapor, bone —
I understand, insistently,

this concept of tears;
I’m surrounded by things.

The collection also carries the guilt of moving on. In “Constant,” the speaker finds “the man she loves / in front of a computer // with his hand in his pants” and in “I Have Drinks with my Dead Friend’s Ex-Boyfriend,” the speaker suddenly finds herself falling for her dead friend’s ex boyfriend, who “drove an hour in the rain // on a cold winter night to a bar / in New England to help me remember you.” There is also the anger that comes with that feeling of being left behind — in “Your Rose Bush,” the speaker has “killed” her rose bush “not by accident:”

not her to dismember the mind,
no false hope, a bloom in reverse
just another way to say
I disremember you.

That poem is a knife in the gut to anyone who has ever felt that anger and guilt, the persistent why and how, the ache of not understanding “the signs.”

This collection is hard to read. It brings old hurts to the surface, no matter how long you’ve buried the memories of your own grief, but it reminds us that memory, in the end, is all we have. You can’t bring them back, but you can choose to remember. You can water the plants. You can look at photos. You can sit outside and listen for a name on the wind, look for any sign you want that they’re somewhere, if not here. You can go on living, which is the affirmation of the final poem of the collection, “Advice for a Dying Fern:”

there still may be fiddleheads,
rolled up shoots

unplayed, not yet unfurled
but ready,

the living ready to burst
through the dead.