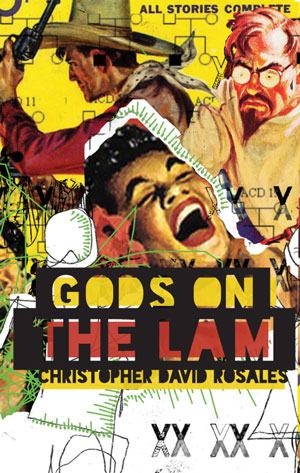 Christopher David Rosales, on the dedication page, describes Gods on the Lam as “an homage to Roger Zelazny, without whose books I may never have been inspired to write.” Zelazny’s influence is evident. Famous for his direct execution and his penchant for genre-mixing, the lifeblood of the late speculative fiction author rushes through the twisty veins of this strange novel—Rosales’ second.

Gods on the Lam opens with a man named Wayne waking up alongside an Arizona highway in a ’70 Chevy that he’s “somewhat sure” belongs to him. He’s only halfway confident that the truck is his because he has no memory. To get a sense of what’s going on Wayne drives to the nearby town of Show Low, where he encounters Ruby, a mother on a decade-long search for her missing son. Believing that the answers to their questions may be linked, Wayne and Ruby team up and stumble upon a string of bizarre (possibly alien) abductions that have been afflicting the area, disappearances that have come to be known locally as the Burials. 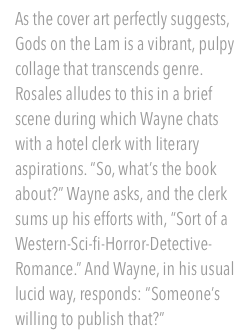 As the cover art perfectly suggests, Gods on the Lam is a vibrant, pulpy collage that transcends genre. Rosales alludes to this in a brief scene during which Wayne chats with a hotel clerk with literary aspirations. “So, what’s the book about?” Wayne asks, and the clerk sums up his efforts with, “Sort of a Western-Sci-fi-Horror-Detective-Romance.” And Wayne, in his usual lucid way, responds: “Someone’s willing to publish that?”

Gods on the Lam’s eccentric nature is not immediately apparent, although the nuts and bolts that made the dime novels of the past so iconic are: a small southwestern town, set in the near past; a macho protagonist-narrator; a resolute but still potentially dubious dame, who admittedly used to be the kind of person who “would steal your wallet, and then help you look for it”; a shifty new sheriff in town who would prefer that some truths stay hidden; and a dark-hearted big business boss who purportedly has the ominous power to “make life where life was not meant to be made.” With secrets abound and treachery around every corner, old school detective fiction readers should have no problem getting sucked into this mysterious world. As a gritty neo-noir tale about lost memories and missing persons, Gods on the Lam plays into many of the genre’s familiar clichés and stock characters then moves beyond them. 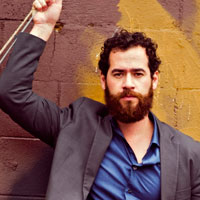 Rosales, not one to waste time, sprinkles in elements of horror and science fiction early on. Soon into their mutual investigations, the ensemble crosses paths with a skeletal “creature,” one of several seemingly subhuman monstrosities that have been reported in Show Low area newspapers prior to this encounter. The group deduces that the beasts must be the “cleanup crew” for whoever is behind the Burials, though it becomes evident later on that these primal figures may actually be the result of chemical testing gone awry… With Wayne as his conduit, Rosales illustrates in gnarly detail the horrors that certain human beings willingly unleash upon one another.

Wayne’s narration, while colorful, at times reads as awfully brusque—almost abrasive, in fact, with its candor. In one scene, a handful of characters traverse the “true wilderness” of a forest that has been untouched for generations, and Wayne describes a female character ducking away from menacing branches “as if they were the grasp of a rapist,” a jarring simile (and probably not one that’d be used to describe a male character’s actions). Wayne, later, compares dangling gasmask filter tubes to “limp wrinkled cocks.” Not exactly eloquent, but it paints a carnal picture. At one point, Wayne’s phrasing concerns Ruby, and he addresses his proclivity for indiscreet descriptors. “Sometimes I’m not good with my words, okay?” he admits, to which she responds with “I know” and moves on, an apparent sign that readers ought to do so as well. After all, the offhand narration manages to fit the tone and the hybrid nature of the text.

Gods on the Lam, at its heart, is a love letter to midcentury noir and speculative literature. Rosales’ palpable fondness for the inner workings of genre shines on each page—and thanks to that high-octane passion, Wayne’s voice comes to life and soars. Although his diction may be troublesome once in a while, the anomalous expressions add to the turbulent atmosphere of the narrative, because Gods on the Lam is one hundred percent bananas, in the best way possible.

HOW WE SPEAK TO ONE ANOTHER: AN ESSAY DAILY READER, edited by Ander Monson & Craig Reinbold, reviewed by David Grandouiller