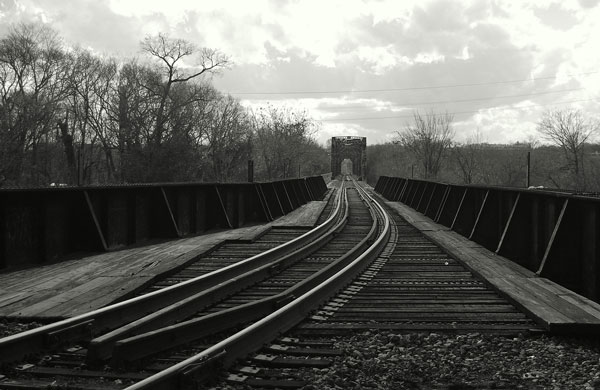 THE LAST ONE IN
by Mary van Ogtrop

A bridge cuts a straight line across the sky, connecting one wooded area of Richmond, Virginia, to another. Imagine a bridge and you’ll see a parabola, the structure’s midsection arching high in the air as though the water below were molten lava. The imaginary people traveling from one side to another are lofted as high as possible, lest they be burned alive or, more realistically, drowned dead. The bridge in Richmond isn’t like that. It has the distinct and exclusive purpose of transporting trains, whose multiple cars and shifting cargo call for complete flatness, a slope of zero. The Richmond bridge, classified as a railway bridge, has no rise in the spot equidistant from the shores of the James River below, as the six kids currently huddled at its center could tell you.

There are exactly three reasons for someone to walk across that bridge: to get to the rope swing at its center, to laugh in the face of danger, and to pass the time. Those reasons were more than enough to fill a decade-old Geo with six teenagers, three boys and three girls, dead set on leaving the suburban heart of Richmond behind and watching shopping centers and highways give way to thickets and dirt roads. As they stepped onto the bridge’s forbidden tracks to a chorus of “Do it!” and giggles, they were certain they were making something of their Saturday and of themselves. But now, the jerky movements of their winter wear-covered bodies make it clear that they’re struggling against some unseen force. Perhaps that’s to be expected; all teenagers are.

One kid, a girl, stands behind the others. She glares urgently through a curtain of black hair. “Squeeze in!” she yells, but though a train is coming—they can hear the faint, then steady, chugging over the sounds of birds and rushing water—her friends won’t let her carve out a space for herself.

“Guys, come on. Squeeze in!” Liz takes a frantic look down. Her graying shoelaces are shaking. The train is close.

“Liz, shut up. Someone’s going to hear us,” Jackie says, blinking her blonde eyelashes boredly. She’d only come along for the ride and then sauntered along the tracks, toeing the tiny cracks between the bridge’s metal slabs all the way to the center, because Jackie knew that everyone wanted Jackie there.

Then they heard the train, and cramming into the shoulder—a tiny lip the size of a crow’s nest cut in half, offering just enough room for two people to stand comfortably—was Jackie’s idea. She’s the first one in. “Guys,” she says, facing the forest of auburn leaves beyond the water. “We better not get caught. We’ll be in so much fucking trouble.” Feeling something pressed against her backside, she turns and scowls back at Mike. He’s the second one in.

Liz looks down. Half a foot to her right: the tracks. Tied to a beam twenty feet ahead: the rope swing, hanging loose and lonely like a strand of hair. The plan is for Jake to swing from it, sailing his skinny body into the freezing river one hundred feet below. That’s what all the punk kids do on the weekends.

Liz is punk in some ways, in how she looks out hard and unsmiling through black bangs, and in the hardcore metal shows where she thrashes around on Friday nights. “Where are you going?” her father had asked last Friday, pulling his glasses down to his mustache. “The Camel!” she’d shouted back, slamming the door, thinking she shouldn’t have slammed it so hard but at least she’d communicated this time. On other nights it’s sneaking out, buying weed, locking her bedroom door and playing Dead Kennedys so loud the house shakes. These are punk things to do.

But she isn’t about to swing into the James River. The river’s where she’d gotten caught in the rapids last summer and had to be pulled to shore by an older boy with back acne and skintight cutoff jeans. He placed her on the shore of James River while all the punk kids watched. She hiccuped dirty water and felt the rocks piercing between the straps of her bathing suit and looked up. From her angle, the bridge looked as arched as an angry cat. “You good?” the boy said through a fog, his scowl replaced by concern. Liz took a deep inhale and closed her eyes. “Yo, girl, you good?” She smiled in the sun.

Jackie clutches a beam and sighs extra-audibly. Mike watches as Jackie lifts a wrist to her beestung lips, bites a loose thread on her corduroy jacket, and tears it free. He shifts behind her but doesn’t blink.

Suddenly she grabs the beam again. The bridge is shaking.

Liz whips back. The train is fifty yards away, a sideways skyscraper hurtling toward her. Terror—not the goose-pimply embarrassment of being called on in Spanish class when she’s zoned out, not the fear of failing her driver’s ed exam that needles her everyday—overcomes her. She can’t breathe. She screams. She takes another frantic look down at the tracks. She could reach out and touch them, can imagine their jagged rust against her cracking fingertips. The train, extending a few feet beyond the tracks, will mow her down like a bug on a windshield. And she wouldn’t be any less deserving than a bug. What’s she done so far? Why shouldn’t she get hit by a train? But she shouldn’t get hit by a train. Her family would miss her, a lot. And she has big plans: becoming a great artist, moving the hell out of Virginia, starting a band, getting a boyfriend. Let’s say she doesn’t get hit by this train. Let’s say she squeezes in somehow, gets a second chance. She could be a good kid who steers clear of danger and of dangerous people. She won’t push into the world’s seedy pockets. She won’t disobey her parents, she won’t disappoint herself. She swears she could do that. She will do that, she wills herself to do that.

Liz tries to squeeze herself between Brandon’s and Melissa’s puffy coats, but there is no space to squeeze into. She shouts at them to please push forward. There is no forward to push into, they shout back.

Liz holds tight around Melissa’s waist. She stops screaming and holds her breath.

“But you know what’s funny about the train?” She looks down at the salad she’s eating—a kale salad because this is California, where Liz now works as an artist—and stabs a few pieces of lettuce with her fork. “My dad was a conductor. He was an Amtrak conductor for twenty-five years.”

She chews, swallows. Then she pulls her bangs aside to make eye contact and make this point, this fifteen-year-old’s point now in its own sixteenth year, absolutely clear: “If I’d died that way, he would’ve killed me.”

The wind slaps Liz’s face and sends her hair flying. She doesn’t look back at the train. The people inside the train, occupied by magazines or thoughts of what’s in store for them in Washington, D.C., don’t look out at her. Inside the train it’s quiet, save for the soft murmurs of conversation and noise leaked from headphones. Outside the train the screech registers for the six huddled kids—the last one in propelled into the mass of bodies, safe—as all the noise in the world.

Then silence. The hopscotching of Liz’s shoelaces calms to a tremor, then stillness.

Jake reaches into his coat, no longer planning to remove it for a swing into the lake, and pulls out a joint. The flame shakes in his hand, creating a jumpy halo of gas, then finds the paper and the weed. He hands it to Liz. As she inhales, her hard eyes pin down his smirking ones. His chattering teeth split his usually closed-lipped grin into a grimace.

The six of them, three boys and three girls, walk briskly back down the tracks and breathe white clouds into the electric air. Then they pile into Jen’s car and drive back to their neighborhoods, one by one. The work of carving a space for themselves in the world will continue from their bedrooms, with the doors shut and the weed floating out the windows and Dead Kennedys shaking the whole house and setting them free. 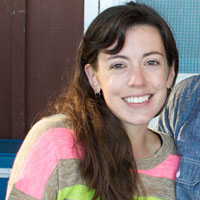 Mary van Ogtrop’s prose and poetry have appeared in the Haverford Review and The Spur Journal. Her current work investigates the boundaries of nonfiction through experiments with fact-based storytelling. A Delaware native, Mary currently lives in San Francisco, where she works at music service Rdio as a senior copywriter while pursuing an MFA in creative nonfiction at the University of San Francisco.

Image credit: Railway Bridge over the James River by rvaphotodude on Flickr