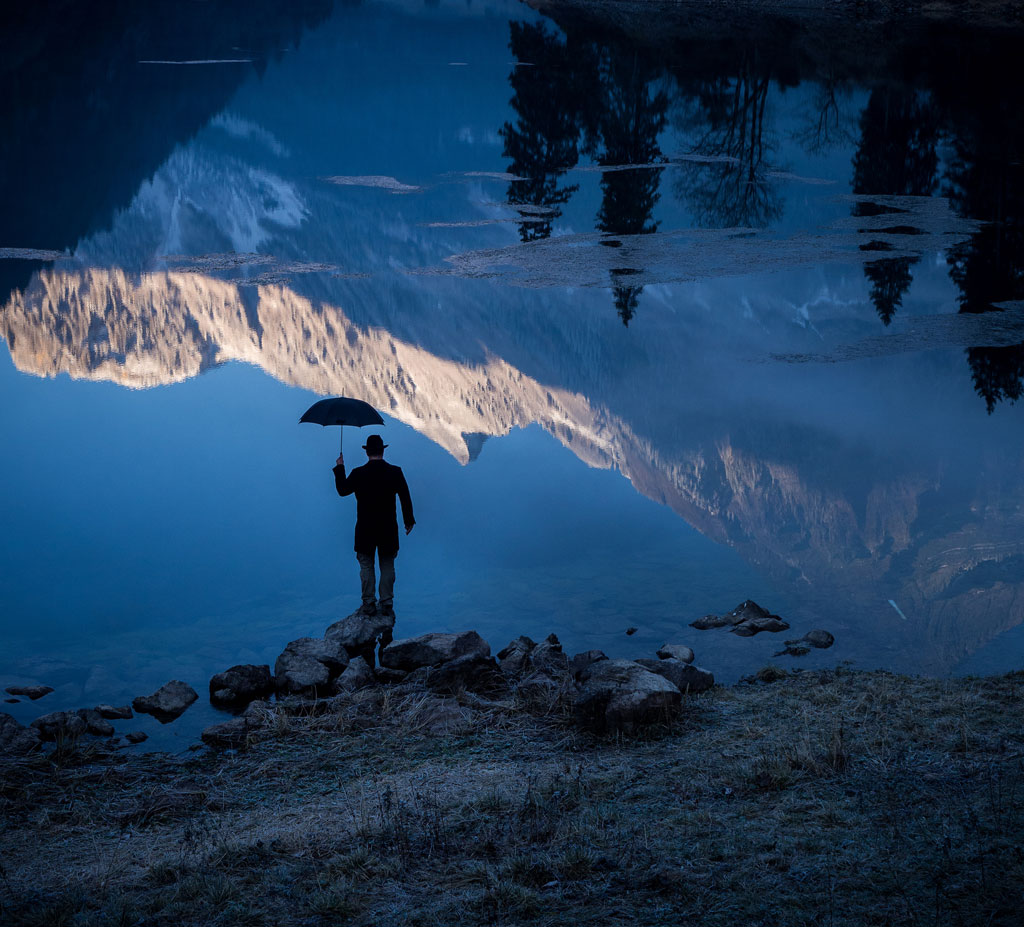 THE GRAVITY OF JOY
by Charles Green

Recently, I ruined someone’s moment of mundane joy. The hallways of my campus building were bare—students were taking exams, or locked away in the library and various study nooks they’d marked as their territory, or sprawled on the campus greens. The end of the semester was nigh; my step had a lilt.

As I walked down the hall, a faculty member from another department—I know him by sight but not by name—exited the men’s room, tossed his black umbrella in the air, and caught it with a jaunty swing of his arm. Then we saw each other, and his fluid movement calcified into the gait of a person too conscious of his awkward stride. He glanced away, then back at me, and finally fixed his eyes on some pretend middle distance until we passed one another.

I wanted to tell him I understood. I know that small, unprofound pleasure of tossing objects into the air and catching them: umbrellas, pens, my water bottle. When I’m cooking and I need a spatula, I’ll pull it from the cylinder and toss it into the air, then catch it and step to the stove. Ease extends through the arm, and gravity becomes a toy. I move without being watched.

Of course, I couldn’t say a word to him. How do you face a stranger and say, “Yes, what a pleasure to toss and catch your umbrella”?

Maybe I could have asked him if he’d seen Singin’ in the Rain. I dislike musicals as a category, but I love Gene Kelly’s 1952 film version. The performers embody manic activity at its highest pitch. Donald O’Connor’s “Make ‘Em Laugh” is one of cinema’s great one-man scenic performances, and, in the title song, Kelly incarnates thoughtless physical joy. After he drops off Debbie Reynolds at her door after a date, he dances with boyish bliss in the rain. Throughout the song, his character, Don Lockwood, is utterly unselfconscious, smiling at strangers as if they’re figures of his own imagining, treating his umbrella as a partner. He’s soaked, he’s joyous, he’s free from all propriety—until he’s stomping puddles in the street and a police officer walks up. The social norm of the law brings his mind back to watching eyes. Lockwood steps back onto the sidewalk, shakes his legs as if to dry them, and walks off into the end of the number, handing his umbrella to a soaked stranger as a gesture of his citizenship.

Of course, that unselfconscious joy is rehearsed; he’s not Don Lockwood but Gene Kelly, knowing innumerable eyes will watch him move, and yet his body still achieves a freedom. Kelly has practiced those moves and sloughed off the inelegance that comes with being watched. The mind has ceded authority to muscle memory.

But even Gene Kelly resisted being Gene Kelly. When he was eight, his mother enrolled him and his brother in dance class, but they quit because they were bullied. He only restarted dance classes at fifteen, when he was athletic enough to defend himself. In college, he studied economics; he even began law school. When he filmed the famous scene in the rain, the water shrank his wool suit, and he had a fever of 103 degrees.

Our routes to grace are never straightforward.

In tenth grade, I had to learn to juggle. I took a mime class—yes, mime, at a public Arts Magnet—and Arkansas Power & Light hired us to entertain them at a conference. (I assume we were cheap.) At a downtown Little Rock hotel, we juggled and mimed for bored professionals frequenting the bar. By that night, I could toss a ball behind my back without dropping maybe three times out of ten, so all I really remember beyond dropping my juggling balls is one specific moment: a woman hustling away from a drunken coworker who kept trying to hand her a key to his hotel room, as graceless as Gene Kelly was graceful.

Over time, I learned to juggle well enough, because juggling three balls is actually easy once you remove the invisible fourth ball: your own fear of dropping. I haven’t juggled in several years, though. I haven’t had an occasion. I turned thirty-seven recently—not that old, but roughly middle-aged, and the birthday coincided with a back injury, weight gain, and the late removal of two wisdom teeth. My back went out as I was reaching to put away a stack of clean plates, so midlife feels like a diagnosis. With that injury came a growth, a small, hard mound that feels like a pebble. When the doctor touched it, he said, “Oh, you have a back mouse!” The back mouse—yes, that is a colloquial term doctors use for it—is an episacral lipoma, a herniation that has filled with fatty tissue. That has meant countless times reaching around to feel if it’s still there or if it has changed, so I embody the pose of old age.

I worry my last days of unadulterated joy—thoughtless, in-the-moment joy—are behind me. I know that’s not true, but knowing and feeling are an awkward, estranged pair of siblings. I used to be able to slip gravity briefly, a flame flickering at the top of hot wax, but now I’m starting to feel like the burnt wick of a nubby candle.

Yes, that’s melodrama. But the back mouse, skin tags, widow’s peaks, white hairs, moles sprawling like maps of white flight: they add up. I see and feel them, and I build a straw nostalgia for what were largely unhappy days. In high school, for some reason I no longer know—I wanted attention? I liked to perform?—I did one hundred bell kicks in a row for a dollar. I never took dance, but I’d discovered the bell kick, that joyous mid-air heel click. I was already six-foot-four, and I knew watching the incongruity of a gangly white dude doing bell kicks was its own kind of pleasure. So, before first-period trigonometry, where I was the only senior in a class of juniors, where I had no friends, I asked if anyone would pony up for a show. Joe, who at sixteen had a full beard and never got carded, pulled out a single. When forced to dance for some reason, I wore the straitjacket of everyone’s imagined eyes on me. But I did the bell kicks, got my dollar, and sweated through the start of trig.

In those days, when friends talked about what they hoped to do in life, I joked that I would die at the age of thirty-seven. I don’t believe in magic or superstition, but my high-school joke has me spooked now that I’ve reached that age. In the days before my wisdom-teeth removal this year, I feared I’d die on the operating table. When my back went out and I had to start physical therapy, I feared my youth was at an end. From here on out, just maintenance. No more grace.

I’m indulging in this melodrama for a reason: I want to send a message to some future self of mine. Whether he’s forty or fifty or eighty, I want him to laugh at my melodrama and to reckon with it. More importantly, I want to tell him something: thirty-seven feels like a turning point. Not just into the melodrama of midlife, but into a closing. Aging isn’t just the body conceding to gravity; as life moves forward, we pull ourselves into the past. I see this conservatism of so many white men in midlife—not just in politics, but in life as well. The few things we know calcify, and we see those calcifications as wisdom. We mistake the gravity that leashes us for another kind of gravity—gravitas. Straw nostalgia hardens into a philosophy. The way things were becomes the way things should be; we reimagine the rusted age—the anxiety, the segregation, the violence—as the golden age. The past becomes a superstition.

It’s easier to rehearse prayers than to believe them. But rehearsing can bring a faith. I’m not a religious or faithful person, but I know that wallowing in the melodrama of aging adds a pull to the grave. It’s that fourth ball, the fear of dropping. I don’t think I can escape that fear, so I’m going to keep rehearsing my secular prayer until it’s true. To my future self—and to my present self as well—flicker against the gravitational pull of the false past. Stay in the gravity of the present. Become the Gene Kelly of tossing any object into the air until you’re no longer yourself, or Gene Kelly, or even Don Lockwood: you’re nothing but kinesis, gravity and its release, all in the same moment. 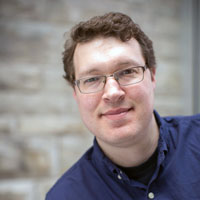 Charles Green’s writing has appeared or is forthcoming in Fiction International, The Southeast Review, and the New England Review, among other venues. He lives in Cortland, New York, with his wife and cats, and he teaches writing at Cornell University.