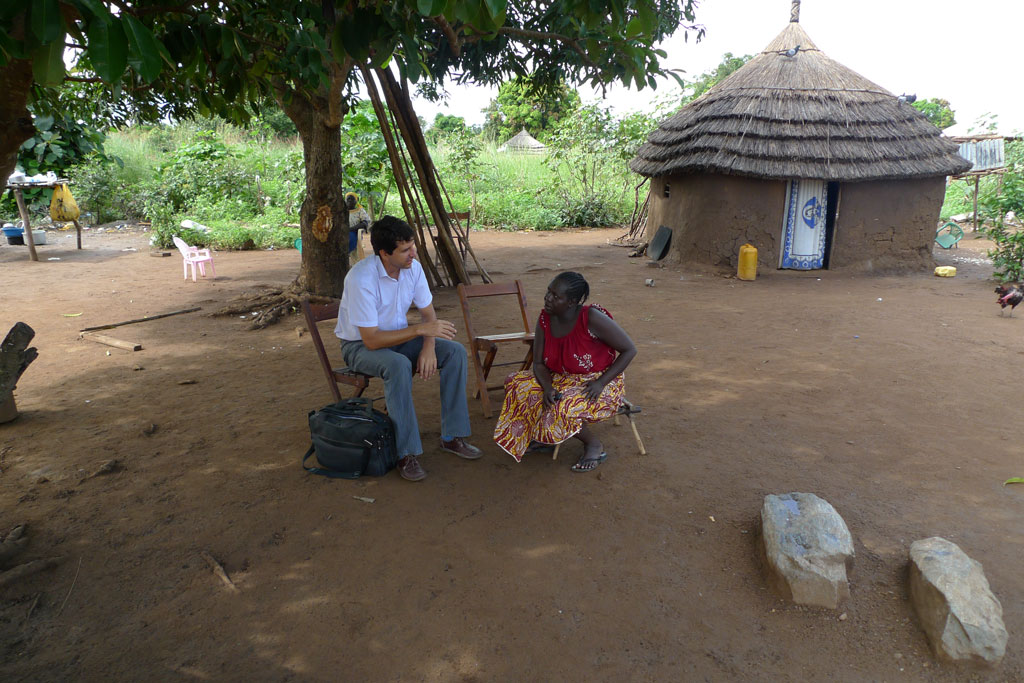 The author meeting with Susan, head of a local NGO in South Sudan talking about microfinance programs

RETURNING TO THE GLOBAL HUMANITARIAN CRISIS:
by Denis Dragovic

Early one evening in 2001 I watched an airplane as it cut through the African sky leaving its long and distinctive vapor trail. I stood still, taking a moment to wonder what the view looked like from above. Recalling my own thoughts when traveling—arrival, the days that lay ahead, a new movie on the in-flight entertainment, the ever-shrinking leg room—I realized that few would have reason to suspect the calamity that was unfolding below.

On the ground, the details were clearer. I was standing amongst a sea of plastic sheeting, mainly blue, some green, and a smattering of other colors. These bamboo structures, extending as far as the eye could see, housed over 20,000 people. Somewhere amongst this sea of people were some of my staff, who had fled along with the rest of the population from a town called Raga in the southwest of the then Sudan. On foot, weaving my way through the country’s newest settlement, I was struck by how resilient these people were. They had trekked for a month, thousands of women and children along with a few men, eating off the land, a diet of peanuts and wild mangoes, in addition to any other scraps they could find.

The thousands of faces from that day make the millions that comprise the global humanitarian crisis real to me.

Through a decade-long journey working with the poor and war-affected, the finer details of wars and humanitarian disasters are starkly apparent.

Through a decade-long journey working with the poor and war-affected, the finer details of wars and humanitarian disasters are starkly apparent. From Australia to Iraq via Africa and Asia, I saw the underbelly of our world, where slave raiders returned with their ill-gotten gains: a dozen women and children, destined to be unloaded in the capital. I once bought the life of a man who had accidentally killed a friend by paying off the remaining blood money: a dozen cows, weeks before he was to hang. The first female staff member I hired in Iraq, a mother of two, was shot at her home, a senseless honor killing perpetrated by the brothers-in-law to stifle rumors of infidelity.

But in equal parts, as if in some delicate balance of nature, the promise of humanity shines through. In Iraq, local staff risked their lives and even their families to help secure the release of a kidnapped Canadian colleague. In South Sudan, I wove my way around temporary shelters made of plastic sheets and invitations to join in an evening meal, a broth of leaves and grass flowed forth at every turn. And in East Timor, I was encouraged to practice my limited vocabulary of their oppressors’ language. As it wasn’t the Indonesian people, I was told, who had burned their homes, lay waste to their livelihoods, or killed their families. It was the military, and that distinction was important to them.

I sometimes wonder, what happened to these people whose paths crossed with mine. Even though many of the meetings were fleeting, the memories linger. One of my recurring thoughts, while sitting face to face with a mother or child, an Ayatollah or tribal chief, was not a glib wish for peace, but selfishly wanting to look into their minds. How did the recently displaced families, who invited me to share in their broth of grass, interpret my garbled response: as polite refusal or harsh disgust? What thoughts did the village chief harbor while hosting an elaborate mock wedding ceremony to showcase his people’s traditions: pride of his people’s culture or a cold calculation at what transactions could be secured? Did the child, lying in hospital with a fresh wound in his cheek complimentary of celebratory gunfire think that the white man would take away the pain or was he afraid of the “white ghost”?

I wanted to know, so I packed my bags and headed back to the places where I used to work to see what happened to the people and projects.

Traveling back to East Timor was a routine journey not dissimilar to visiting Sydney. South Sudan required a friend in an NGO to arrange for a visa, but Iraq was problematic. Without an official reason to be there, it was hard to get in.

A good friend of mine from when I had worked there had promised to arrange a seven-day pass from the passport office in Najaf, Iraq, though as I fronted the airline counter in Amman, Jordan, I admitted that I had no paperwork to prove it. A few phone calls, some kind smiles, and promises that everything was sorted on the other end led to me boarding the flight, but unsure of what the consequences were for illegally entering the country.

The nearly two-hour flight for my return to Najaf was uneventful. I laid low, avoiding any conversation with the hope that my southern European features and a perfectly trimmed, seven-day growth would detract attention. On the inside, though, my stomach was curdling. 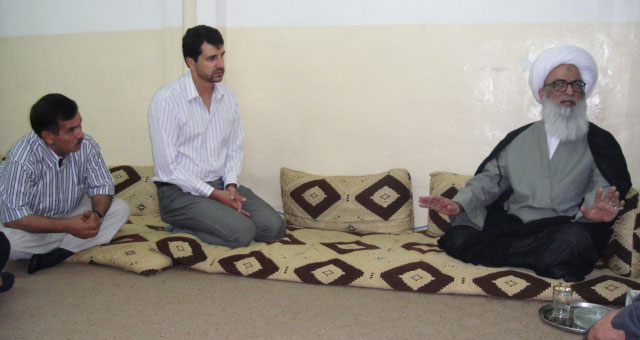 The author with Ayatollah Sheikh Bashir Najafi who had accused him years earlier of being a CIA spy.

As we broke through the clouds to begin the final descent I caught a full panoramic view of the city and the largest graveyard in the world, the place where the final wishes of the Shia faithful—to be buried near Imam Ali—are fulfilled. Founded in the eighth century, Najaf traces its provenance to the whim of a camel carrying the dead body of Ali, the slain forebear of the Shia, and the namesake of the shrine built upon the ground at which the camel eventually came to rest. From the air it seems the camel had a good eye. I could see how centuries ago it would have been a wise place to establish a settlement—close to a water source and with one half of the approach to the city protected by the Sea of Najaf. Maybe the camel had been guided by God.

One of my recurring thoughts, while sitting face to face with a mother or child, an Ayatollah or tribal chief, was not a glib wish for peace, but selfishly wanting to look into their minds.

Divine intervention is a closely held belief amongst Muslims, most evidently expressed in the common remark in Arabic, insha’allah, meaning “God willing.” It’s used in various ways, including as an affirmative response, as in, “Can I please have a receipt for that?”

“Insha’allah,” is said as the receipt is handed over.

It’s also commonly used to pass off responsibility by speaking the word while responding with a smile and nod, even though knowing the truth to be otherwise.

Saddam’s soldier #1 shouted, “We will chase the infidels into the sea!”

Rarely, I hear it used in its purest form: if God is willing then this highly unlikely outcome that we all hope and pray for could well come true.

Being the third most important destination on a devout Shia Muslim’s travel itinerary makes an airport crucial infrastructure. Amazingly, Najaf did not have an airport until mid-2008, when a Kuwaiti firm’s efforts at rehabilitating an old air force base opened the city for the first time to international travelers.

The airport, built in an old-fashioned hangar style, is secure, modern, clean, and very spacious, but none of that was on my mind as I walked to immigration. Instead, I began to look around for someone, anyone, who looked familiar. Where was my friend’s contact? Did he forget? Maybe his promise of a visa was all bluster, not believing that I would actually come. Then to my surprise, a very young woman appeared in front of me covered in the customary black abaya worn in religiously conservative areas. With a beaming smile framed by her hijab, she introduced herself as Zahra.

Zahra, a former staff member of the NGO I led, thankfully had secured a job at immigration.  She seemed to have that unique ability to perfectly balance the cultural reservedness expected of women while still being assertive and able to get her message across. Her nonchalance about the whole situation slowly began to put me at ease. While she was enthusiastic to help, it seemed that getting an entry visa upon arrival would not be such an easy thing.

I was shown a seat and asked to wait while Zahra argued the case. I watched as phone calls were made, hands cut through the air emphasizing a point, and voices rose. Then, it all seemed to be settled. A solution was found. I just needed to confirm that I was a pilgrim visiting the Shrine of Imam Ali.

I responded with a smile and answered, “Insha’allah.” 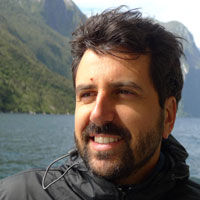 Denis Dragovic is an author of literary and scholarly works. Drawing from his experiences responding to major humanitarian crises in the Middle East, Asia, and Africa, Denis’ literary writing weaves together narratives of foreign cultures and adventure travel with an insider’s expert perspective on the humanitarian challenges of the twenty-first century. His latest book is No Dancing, No Dancing: Inside the Global Humanitarian Crisis (Odyssey Books, 2018). Find him at www.denisdragovic.com.