In classical music, a fermata is a pause of unspecified length printed above a note or rest. It is represented by an eyebrow above a dot, nicknamed a “birdseye” or “cyclops eye.” How long that pause should last is left to the discretion of the performer or the conductor.

In March 2020, the music world paused, subito—suddenly—leaving concert halls dark for the foreseeable future, and an entire industry stunned and unemployed. For how long, we can only guess.

And yet, by comparison, this Great Silence seems trivial: a global pandemic is killing millions. The rest struggle against police brutality, racial injustice, the rise of fascism, the precarious state of democracy.

In late June, as our American cities broke open in protests over the murders of George Floyd and Breonna Taylor, I received a WhatsApp message from my longtime friend, Richard Casimir, a Haitian-born violinist and composer now living in Pamplona, Spain. He’d written a string orchestra piece on the improbable (it seemed to me, in this dark time) theme of hope. Now he was enlisting performers from all over the world to record their individual parts while quarantined at home.

It would be a diverse group of musicians, including conservatory professors, international soloists, orchestral players, high school teachers—and Richard’s 14-year-old daughter, Emma, a promising young violinist. My own daughter, Caeli, who grew up to be a musician, appears on both violin and viola. The tracks would be mixed together by Richard’s nephew, Michael, a violist in the St. Louis Symphony.

Richard wanted to know: Would I help him find a poet to compose words to accompany the music? My first thought was that a poem on hope would be a nearly impossible challenge in this bleak time. I turned to one of the strongest poets I know, my colleague Herman Beavers, a scholar and artist whose poetry often evokes and centers music. Herman’s gorgeous and moving response to “Esperanza” is “Antumbra,” a two-part poem named for the part of a solar eclipse in which the ring of fire from the hidden celestial body is visible on the edges. The poem, which begins in despair, brings us forward to a moment when we can sense clarity around the edges of ruin:

in the morning’s first blush,
nomads on a river whose whispers

turns the sad machine of hurt
to wings, the Blessing’s pale fire blooming

“Esperanza” is a lush and seamless integration of sound that swells with purpose, and with hope, that we will one day again be together. The collaboration with “Antumbra” nudges us closer to that moment.

Everywhere the search
for colors to drape
across the heart, a state
of mind barely legible

against the shout of hyperbolic
clothes, the mantle of undignified
thespian privilege, a Van Gogh painting
fake & perfectly intact. This panic-

stricken tale of woe for those who
live poised on the lipstick
side of things, coveting a gift for
reinvention perhaps or the tactical

use of a day’s ration of rice. Enough
with the cars minus license plates
children banging metal pots
clustered around dead pay phones.

Struck dumb in the square-jawed
light, the sweat of blood red air,
the chameleon plies his craft,
muse for a contretemps’ pallid blue yes—

its precise, ironic surface sprawling
across scrublands of agate type, dramas
of family succession akin to
the serpent’s unconscious hatred of mettle.

Anywhere a heart hammers
where the curve’s beguiling tumble

of words makes the straight line
testament to unspeakable sadness,

we are one ache, humans holding
the moment so still, the day could

fly to pieces. If we could turn
fast enough, we might catch a

glimpse of an angel’s wingtip, the hem
of a celestial robe. Trudging behind

beauty, the velvet fist of violence
flattens into romance, leaves us caught

in the squirm of a good plot. Could
the cool flesh of a peach, cumulus

clouds rocking the sky above us,
the slow wheel of a mind

humming in the tightest
corners of the universe,

invite us to taste honey, taste
salt? What if a good year

is any that God sends, even
if the blackbird flies low to

the ground, his song lost
in shadow? So what if the

sound the rain makes, ticking
on the roof, against windows

pelted by a panoply
of numerals tumbling all about us?

Might we relinquish looks shot through
with worry, with hubris? Caught

in the morning’s first blush,
nomads on a river whose whispers

turns the sad machine of hurt
to wings, the Blessing’s pale fire blooming, 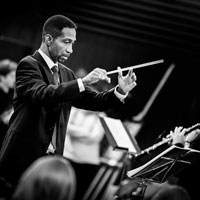 A native of Port-au-Prince, Haiti, Richard Casimir (composer) graduated from Temple University in Philadelphia, PA, with a Masters and Professional Studies degree in Violin. He worked as a violin instructor at the Preparatory Division for Gifted Young Musicians at Temple University, and as a string teacher in Philadelphia public schools, before moving to Spain in 2006. He currently resides in Pamplona with his wife and two children and teaches violin and chamber music at a private high school, Sagrado Corazon. Richard began composing to address the technical needs of his students and ensemble groups, while encouraging the communal and citizenship aspect of their music education. To that end, he has organized several benefit concerts for charitable causes, involving his students both from Philadelphia and Pamplona. His latest composition, “Esperanza,” is an example of such a community awareness effort. He dedicates it to the victims of discrimination and intolerance, appealing to people of all cultures to recognize their shared humanity and to treat one another with compassion and dignity. Here Richard is pictured conducting the Sagrado Corazon Youth Orchestra for a benefit concert in the Parliament of Navarra, located in the city of Pamplona. That concert, entitled Music Against Inequality, was organized by Oxfam Intermon to raise public awareness in combating poverty around the world. 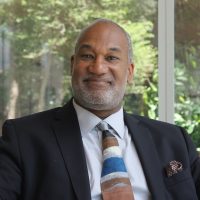 Herman Beavers’ most recent poems have appeared in The Langston Hughes Colloquy, MELUS, Versadelphia, Cleaver Magazine, The American Arts Quarterly, and Supplement, Vol. 2. His poems are anthologized in the volumes Obsession: Sestinas for the Twenty-First Century (University Press of New England), Remembering Gwen (Moonstone Press), Who Will Speak for America (Temple UP) and in the forthcoming volume, Show Us Your Papers (Main Street Rag Press). His chapbook, Obsidian Blues, was published in 2017 by Agape Editions as part of its Morning House Chapbook Series. His latest books are Geography and the Political Imaginary in the Novels of Toni Morrison (Palgrave Macmillan, 2018), and The Vernell Poems (Moonstone Press, 2019) and the forthcoming Even in Such Light (Anaphora Literary Press, 2020). He serves on the Advisory Boards of The Furious Flower Poetry Center, Modern Fiction Studies, The Black Scholar, The Langston Hughes Review, and African American Review.

THE ART OF FLASH, Workshop in Fiction and Nonfiction, taught by Cleaver Flash Editor Kathryn Kulpa | October 3-November 7, 2020 [SOLD OUT]

THE PROPULSIVE PICTURE, Image as an Engine in Poetry, a Workshop taught by Cleaver Poetry Editor Claire Oleson | September 19 to October 24, 2020 [SOLD OUT]

URBAN WILDLIFE: WRITING ABOUT THE ENVIRONMENT, Co-taught by Lucy Spelman and Susan Tacent | September 12 to October 3, 2020 [SOLD OUT]

EMBRACING UNCERTAINTY, a Workshop to Jumpstart Your Writing, taught by Tricia Park | September 19 to October 17, 2020 [SOLD OUT]

EMBRACING UNCERTAINTY II: A Workshop to Jumpstart Your Creativity, Taught by Tricia Park | Nov 7 to Dec 12, 2020

THE ART OF FLASH, Workshop in Fiction and Nonfiction, taught by Cleaver Flash Editor Kathryn Kulpa | January 3 to February 7, 2021

A WORLD BETWEEN, a novel by Emily Hashimoto, reviewed by Ashira Shirali

A WORLD BETWEEN by Emily Hashimoto Feminist Press, 440 pages reviewed by Ashira Shirali Let’s be honest—the chances of walking into a bookstore and finding a literary lesbian romance are low. You’re more likely to ... Read More
September 17, 2020

DUMP TRUMP Illustrated T-Shirts by William Sulit Many artists have the ability to verbalize their thoughts with great clarity and eloquence—sadly, I’m not one of those. This must be a great source of frustration for ... Read More
September 4, 2020

GARDEN BY THE SEA, a novel by Mercè Rodoreda, reviewed by Anthony Cardellini

GARDEN BY THE SEA by Mercè Rodoreda translated by Martha Tennent and Maruxa Relaño Open Letter Books, 203 pages reviewed by Anthony Cardellini When I began my part-time job at a botanical garden in the ... Read More
September 4, 2020