THE CROWS
by Kathryn Hellerstein

We hear them before dawn in our dreams
And step through droppings
On the sidewalk in the morning.

Seeing no birds besides the usual sparrows,
We wonder, at first, if geese were
Driven up from the river by the night’s rain.

At dusk, I walk with my daughter.
Through the deepening light, black arrowheads
By the hundreds swarm over the treetops,

Glide, and settle indifferently, caw, grow silent,
Caw, in a circle of branches.
I spin around with my face to the sky.

As far as I can see, crows bob
On the highest twigs of every tree.
In a moment, they rise up together,

A dark geyser. They fly forward
In the direction we are walking, and drop
Onto the next circle of trees.

People come out of their houses,
Looking up. Neighbors
Talk to strangers, and one woman

Says, “I thought it was a sign,
God was telling me something. But
I don’t understand what He’s saying.”

The crows lead us home.
They roost in the tops of the plane trees
Around our house, around our neighbors’ houses.

Late at night, I look out the third floor window.
There, as the wind blows,
As the rain hurtles against the roof, the crows

Cling to the winter twigs
Like thousands of shadow-fruits,
Wedged among the leafless branches. 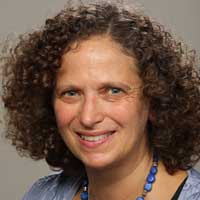 Kathryn Hellerstein is Associate Professor of Yiddish at the University of Pennsylvania. Her books include a translation and study of Moyshe-Leyb Halpern’s poems, In New York: A Selection, (Jewish Publication Society, 1982), Paper Bridges: Selected Poems of Kadya Molodowsky (Wayne State University Press, 1999), Jewish American Literature: A Norton Anthology, of which she is co-editor (W. W. Norton, 2001). Her new book, A Question of Tradition: Women Poets in Yiddish, 1586-1987 (Stanford University Press, 2014), won the National Jewish Book Award in Women’s Studies.  A major contributor to American Yiddish Poetry: A Bilingual Anthology (University of California Press, 1986), Hellerstein’s poems and many scholarly articles on Yiddish and Jewish American literature have appeared in journals and anthologies. She has received grants from the NEA, the NEH, and the Guggenheim Foundation. Her Women Yiddish Poets: An Anthology, is forthcoming from Stanford University Press.