Trevor Alixopulos’ visual narrative presents a thoughtful and visceral glimpse of new-parenthood through a male lens. In this piece, he questions the very nature of existence and what it means to be human. Who is this new being? How is the parent’s life now different? As he moves through time and space, Alixopulos gives us his own take on generational shift. 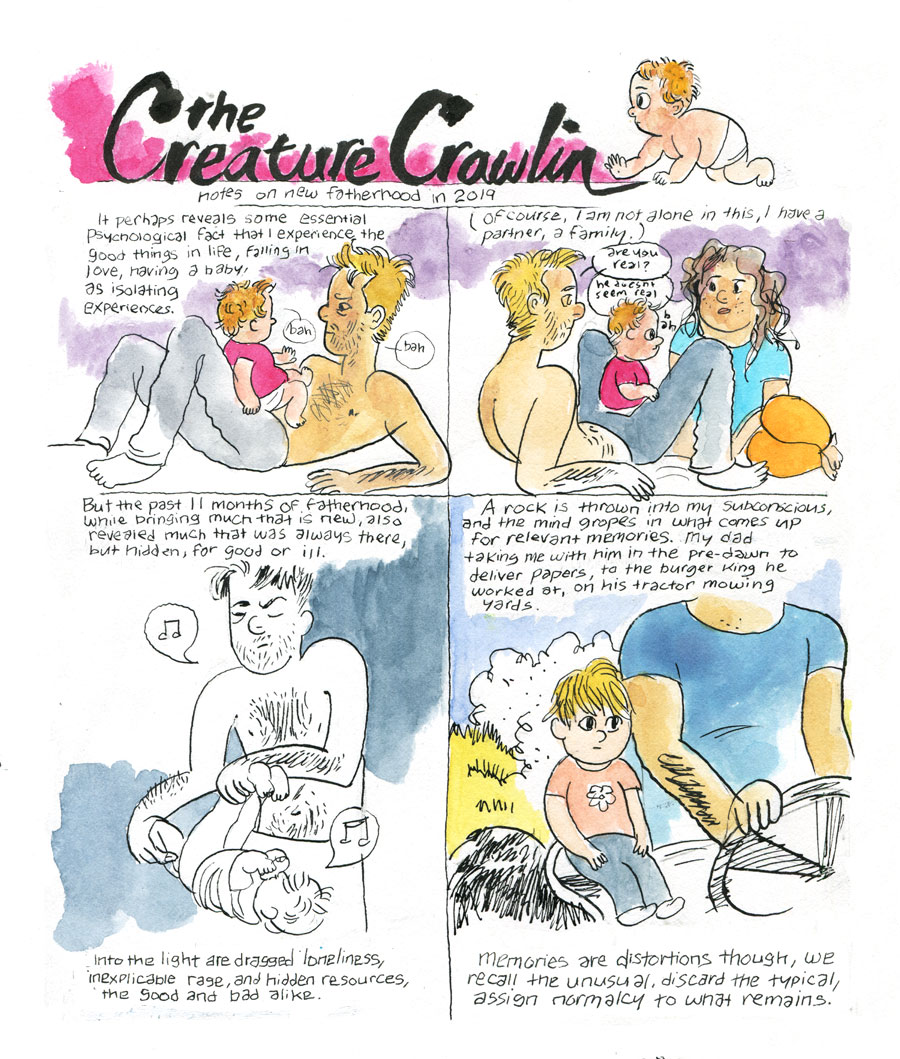 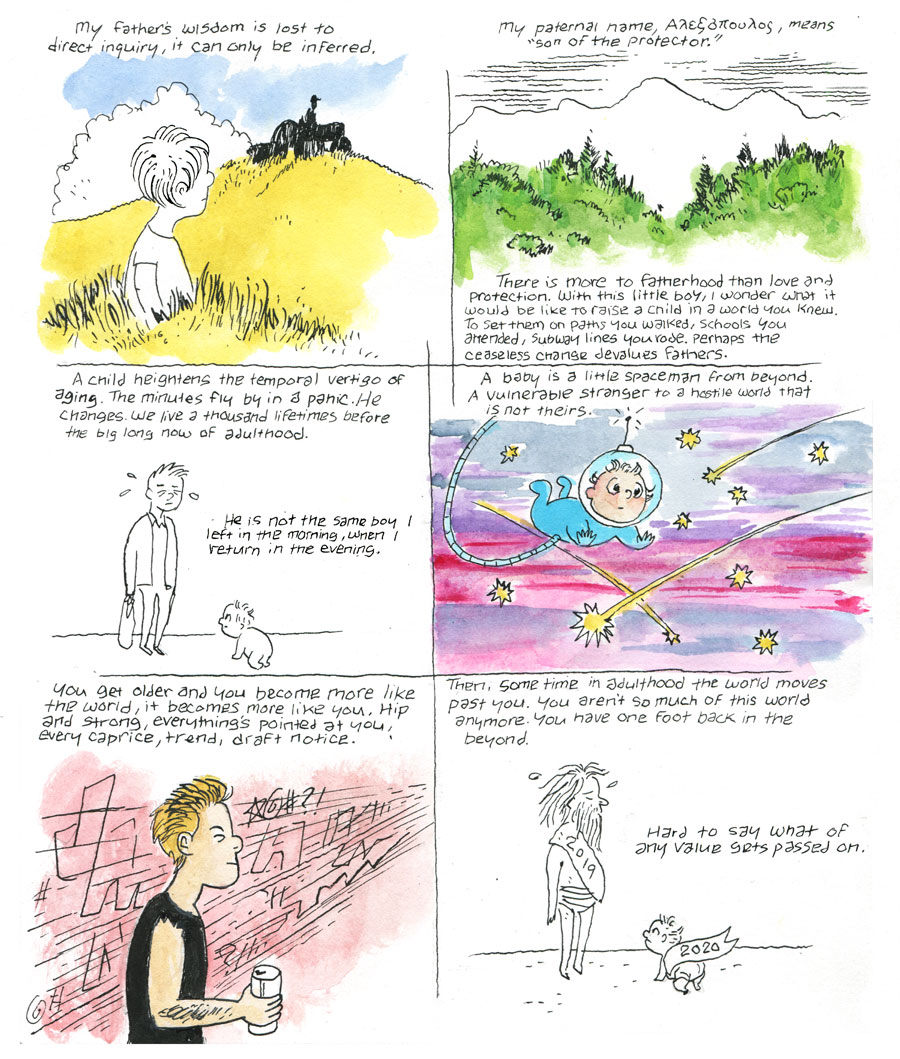 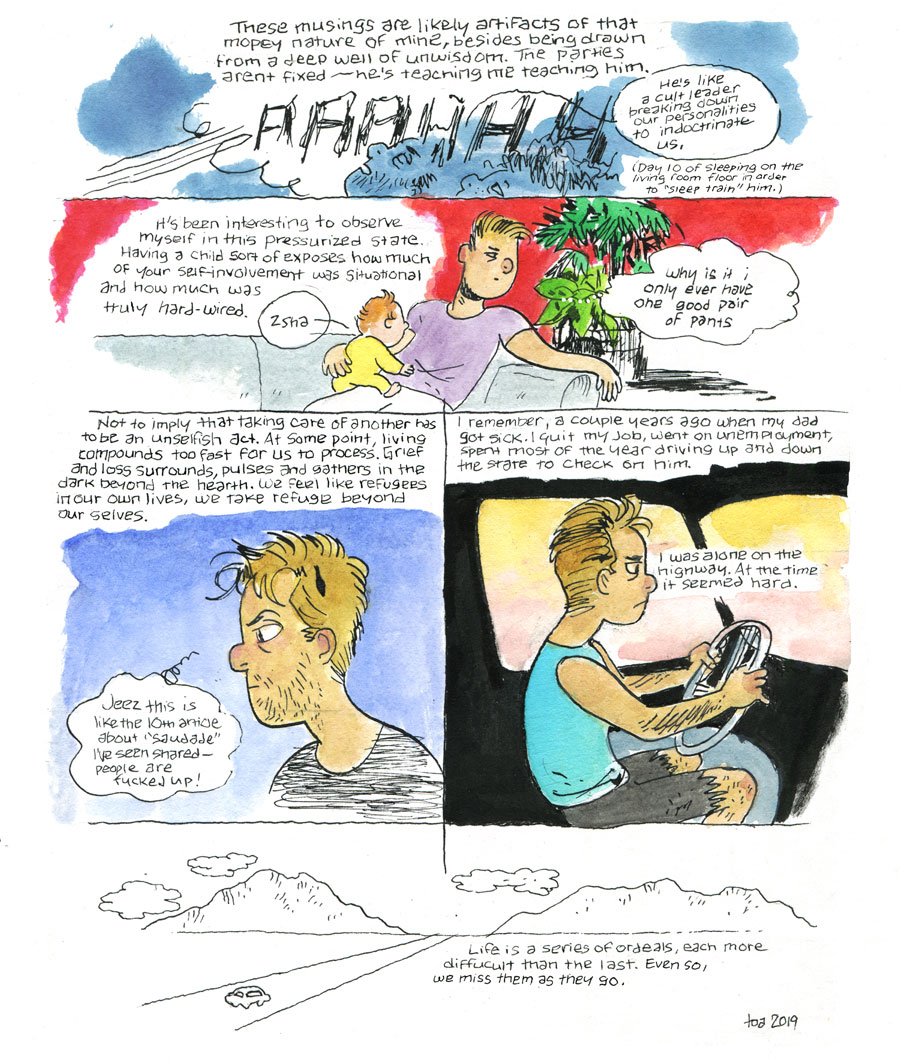 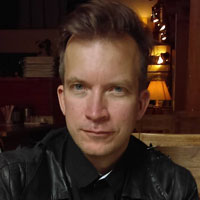 Trevor Alixopulos is a cartoonist, writer and editor. His graphic novel, The Hot Breath of War (Sparkplug Comic Books), was nominated for Outstanding Graphic Novel in the Ignatz Awards and featured on tcj.com‘s “Top 100 Comics of the Decade.” His nonfiction comics essays have appeared on popula.com, where he was also a designer and editor. His various comics and illustration venues and clients include Los Angeles Review of Books, Kaiser Permanente, Fantagraphics Books, Turner Broadcasting, Seven Stories Press, Playboy, East Bay Express, North Bay Bohemian, and Scout Books. He lives in California.

It perhaps reveals some essential psychological fact that I experience the good things in life, falling in love, having a baby, as isolating experiences
Baby: bah Father: bah

(Of course I am not alone in this, I have a partner, a family)
Father: are you real?
Mother: he doesn’t seem real

But in the past 11 months of fatherhood, while bringing much that is new, also revealed much that was always there, for good or ill. Into the light are dragged loneliness, inexplicable rage, and hidden resources, the good and bad alike

A rock is thrown into my subconscious, and the mind gropes in what comes up for relevant memories. My dad taking me with him in the pre-dawn to deliver papers, to the burger king he worked at, on his tractor mowing yards. Memories are distortions though, we recall the unusual, discard the typical , assign normalcy to what remains.

My father’s wisdom is lost to direct inquiry, it can only be inferred.

My paternal name, Αλεξόπουλος, means “son of the protector.” There is more to fatherhood than love and protection. With this little boy, I wonder what it would be like to raise a child in a world you knew. To set them on paths you walked, schools you attended, subway lines you rode. Perhaps the ceaseless change devalues fathers.

A child heightens the temporal vertigo of aging. The minutes fly by in a panic. He changes. We live a thousand lifetimes before the big long now of adulthood. He is not the same boy I left in the morning, when I return in the evening.

A baby is a little spaceman from beyond. A vulnerable stranger to a hostile world that is not theirs.

You get older and you become more like the world, it becomes more like you. Hip and strong, everything’s pointed at you. Every caprice, trend, draft notice.

Then some time in adulthood the world moves past you. You aren’t so much of this world anymore. You have one foot back in the beyond. Hard to say what of any value gets passed on.

These musings are likely artifacts of that mopey nature of mine, besides being drawn from a deep well of unwisdom. The parties are fixed, he’s teaching me teaching him.
Baby: AAAAHHH
Father: He’s like a cult leader, breaking down our personalities to indoctrinate us
(Day 10 of sleeping on the living room floor in order to “sleep train” him)

It’s been interesting to observe myself in this pressurized state. Having a child sort of exposes how much of your self-involvement was situational and how much was truly hard wired.
Baby: zsha
Father: Why is it I only ever have one good pair of pants

Not to imply that taking care of another has to be an unselfish act. At some point, living compounds too fast for us to process. Grief and loss surrounds, pulses and gathers in the dark beyond the hearth. We feel like refugees in our own lives, we take refuge beyond our selves.
Father: Jeez this is like the 10th article about “saudade” I’ve seen shared, people are fucked up!

I remember, a couple of years ago when my dad got sick. I quit my job, went on unemployment, spent most of the year driving up and down the state to check on him. I was alone on the highway. At the time it seemed hard.

Life is a series of ordeals, each more difficult than the last. Even so, we miss them when they go.