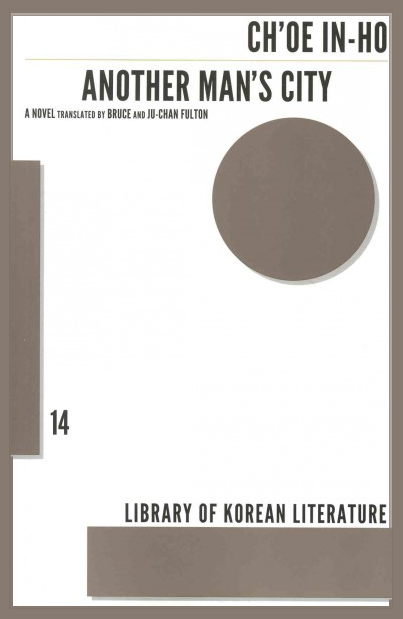 As I’m writing this, the rain is beginning. The spattering sounds of drops hitting the fat, broad maple leaves on the tree outside my window catch my ear like static. The rain turns on the rich, dirt smell of the ground and dampens the sound of passing traffic. My neighbor, who plays the piano for the Portland Opera, is practicing some Brahms and singing out the notes as he plays them.

This is my place. Do I think I belong here because my senses interpret it as “mine,” and I’m attached to the reality I identify as “mine,” or do I belong in any old place, whether I recognize my surroundings or not?

This impossible question is the crux of Choe In-Ho’s novel Another Man’s City. I walked into it expecting something bizarre, futuristic, and possibly a bit whimsical. But this is not The Wind-Up Bird Chronicle. Instead, I ended up in one of Philip K. Dick’s amphetamine dreams. “Every train station displays a timetable,” he writes,

For the public, it’s a kind of civic contract, it’s the way things work. Likewise, weren’t all K’s thoughts and actions following a sequence, a meticulous computerized program? Hadn’t K become a human train, an automaton, coming and going as programmed?

For K, the unmoored hero of Another Man’s City, the universe collapses on a Saturday, around 7 a.m. He wakes up, shakes off his hangover, and after a few bilious heaves, comes to terms with the strange, fleshy creature who sulks at him in the mirror. Last night went poorly; he came home drunk, couldn’t get an erection, and forgot to turn off his alarm clock. And another thing: “And then, for the first time in his fifteen years of married life, he had risen from his bed naked, his bedclothes having vanished like a magician’s dove. And finally his aftershave had disappeared, replaced with a brand he wouldn’t be caught dead with.” Curiouser and curiouser. K, it seems, has woken up on the wrong side of someone else’s bed, next to someone else’s wife. Even his dog fails to recognize him and sinks its puppyish fangs into his ankle. Can it get worse? Absolutely.

Bitter, bare, and oppressive in its tone, Another Man’s City is a claustrophobic story about a man going to pieces. Convinced that he has somehow been replaced by a clone of himself—or maybe he is the clone?—K whips himself into a paranoid lather. Is his wife really his wife? Is his wife the same woman as his best friend’s wife? His suspicion seems to center totally around women, their inherent untrustworthiness. He seems to think they’re interchangeable, and in fact one woman easily becomes the surrogate for another. 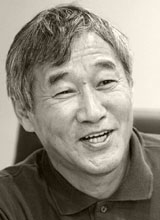 On top of this, Choe, who converted to Catholicism in the 1980s, layers on a thick frosting of Catholic imagery. Original sin, cheating wives, and unpredictable lust bubble through the crust, adding a creepy logic to K’s unwieldy thinking. “He remembered passing his hand across the cheek of his mother just before she was encoffined—his wife had felt even colder. The frigidity of marble, of ice, of an inanimate object—that’s how his wife’s body had felt.”

Choe is one of South Korea’s most famous writers. Decorated with literary awards from a young age, he often wrote in a way that criticized Korea’s totalitarian regime, and his signature, surrealist style is credited for breathing new life into modern Korean fiction. 19 of his works were made into films, and his novels were serialized in the magazine Saemto for more than 34 years, a record in South Korean publishing. He was so famous that his book covers were adorned with his face—no author photo hidden on the back jacket flap. He pushes the envelope in every way, challenging us to change our minds about everything we know (or think we know) about ourselves.

In Another Man’s City, Choe’s fifth novel to be translated into English, we’re led by a master storyteller through the maze of our own minds. As K doubts his reality, the reader begins to doubt K. Who’s the crazy one here, I wondered. If K’s madness is so accessible, is mine, too? Is his paranoia the symptom of a mental illness, or is it the natural consequence of realizing that there are larger, darker forces at work, pulling the strings that underlie every aspect of human life?

These are big questions, and they push Another Man’s City beyond the genre parameters of science fiction. This is the novel that Choe In-Ho, who died in 2013 at 68, wished to be remembered by: according to the translators, “he finished the first draft in two months, writing as usual by hand, but with thumb and fingertip thimble guards, his fingernails and hair having been lost to chemotherapy and radiation treatments.” Reading, I imagine the author bending over his notebook, a man so pale that his extremities are nearly transparent, doing the work of transmitting his final story. I wonder if the rain distracted him; if, like K, he felt so much fear that he wanted to leap out of his skin.

Maybe, like K, he felt like an ant on a Mobius strip, “on an infinite journey, from inner to outer and back to inner, a journey without beginning or end,” with no goal in mind except making it through the next day. Or maybe he was like any of us, ill at ease in the world even as he claimed it for his own. Maybe there is no moral, no punch line. Maybe we can hear the single footfalls of the rain.