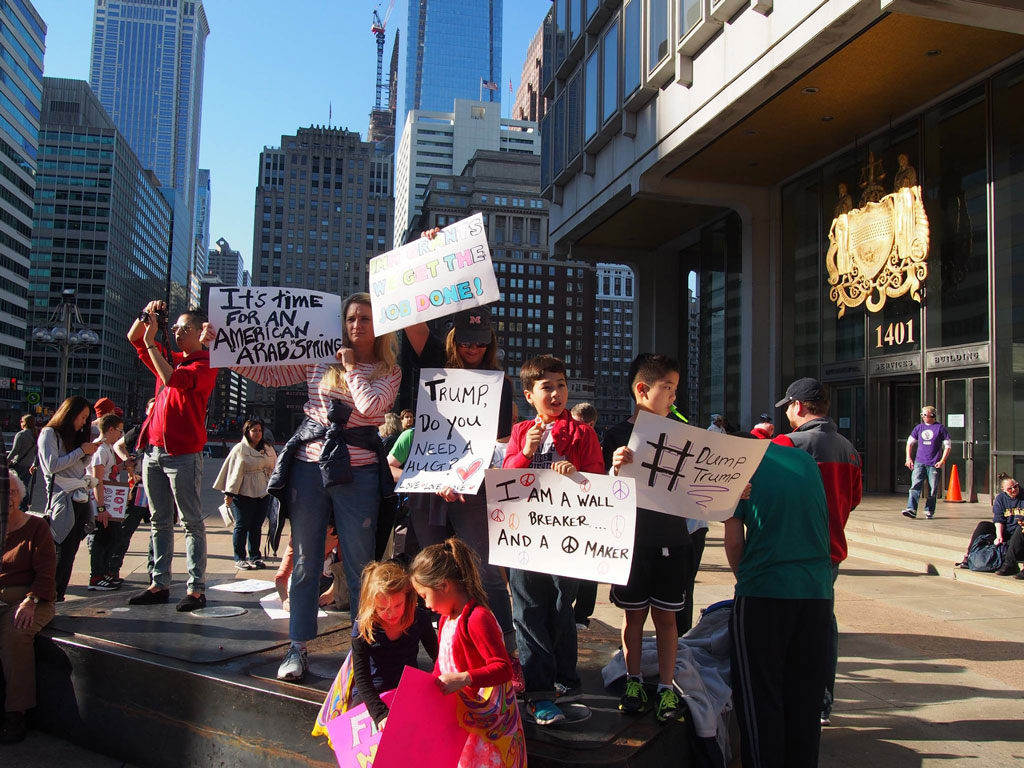 At the center of a novel I just completed, Everything is Borrowed, is the story of an anarchist Jewish immigrant of the 1880s who, seeking to repudiate religion, opens his produce stand across from the Love of Mercy synagogue on Yom Kippur. With no customers on the holy day, the anarchist quietly reads the “pure prayer” of Johan Most. Mid-day, the religious men emerge from shul to get some air. Their eyes flash on the anarchist, who pays them no attention. Their hands become sweaty. He reads. They try to look away. He is taunting them with his own radical freedom.  What right does he have, defying God’s will? Who can ignore such a transgression? And so on they worry, drawing closer to the anarchist, whose own voice, reciting lines of radical freedom, must be tightening, cinching up, even as his voice rises. The words come and they fall like stones on the faces of the pious.

Who can endure this pelting?

If I tell you they can’t—that they lose their minds on a day of solemn prayer dedicated to cleansing of sin—would you be surprised? The religious men attack their quiet oppressor, and in turn get hauled off to the lock-up. Is the anarchist responsible for their behavior? Has he lured them into violent action? These are questions for the novel.

But in real life, what happens when we lose our minds in ideological rage, when someone or something conditions a thoughtless response? We lose our moral authority. We betray our best selves.

On Saturday, for the second week in a row, I attended a protest march against the election of Donald J. Trump as President. These marches here in Philadelphia, as they have been around the nation, are meant to bring people together to assert their anger, their betrayal, and their worry over the direction of the nation under Mr. Trump. To press for action. They provide an instant sense of camaraderie and communal feeling, and, yelling righteously into the cavern of towers, or the granite of monuments, or, in our case, the sturdy brick of Independence Hall, a heartfelt outlet for protest. The marches allow a person edging toward hopelessness to feel alive again, if only for an instant, and to sense oneself melding into the body politic. After despondent days, they come as a relief. 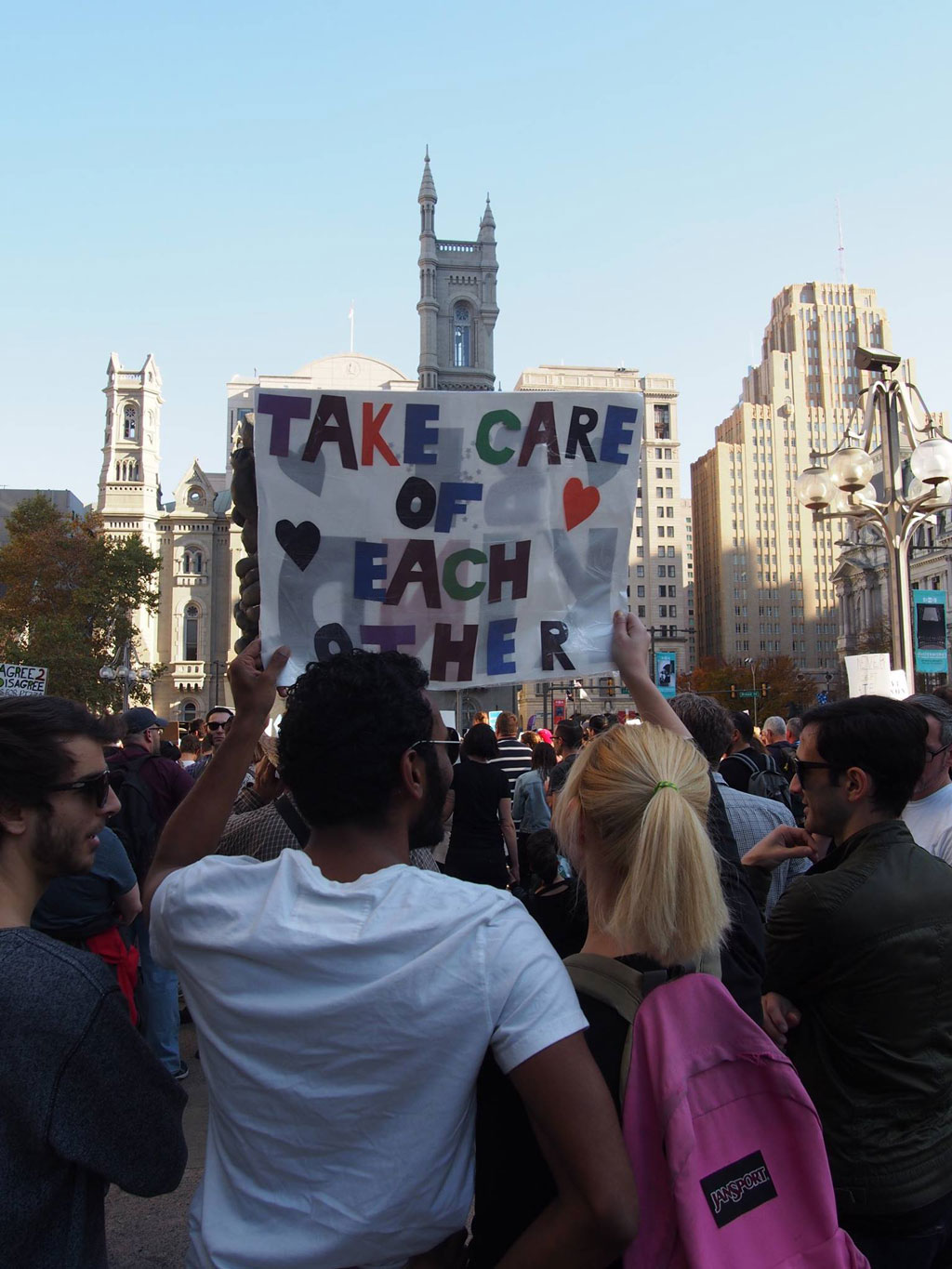 My daughter Lena, who is 17 years old, has been actively pursuing the protest marches as a way to assert some influence over an election in which she could not vote; and, as a young woman who feels threatened by having a sexual predator in the White House. She’s been documenting the protests, paying particular attention to the individual and the individual’s message, writing on signboard; this nascent movement has produced an extraordinary range of personal poetry. 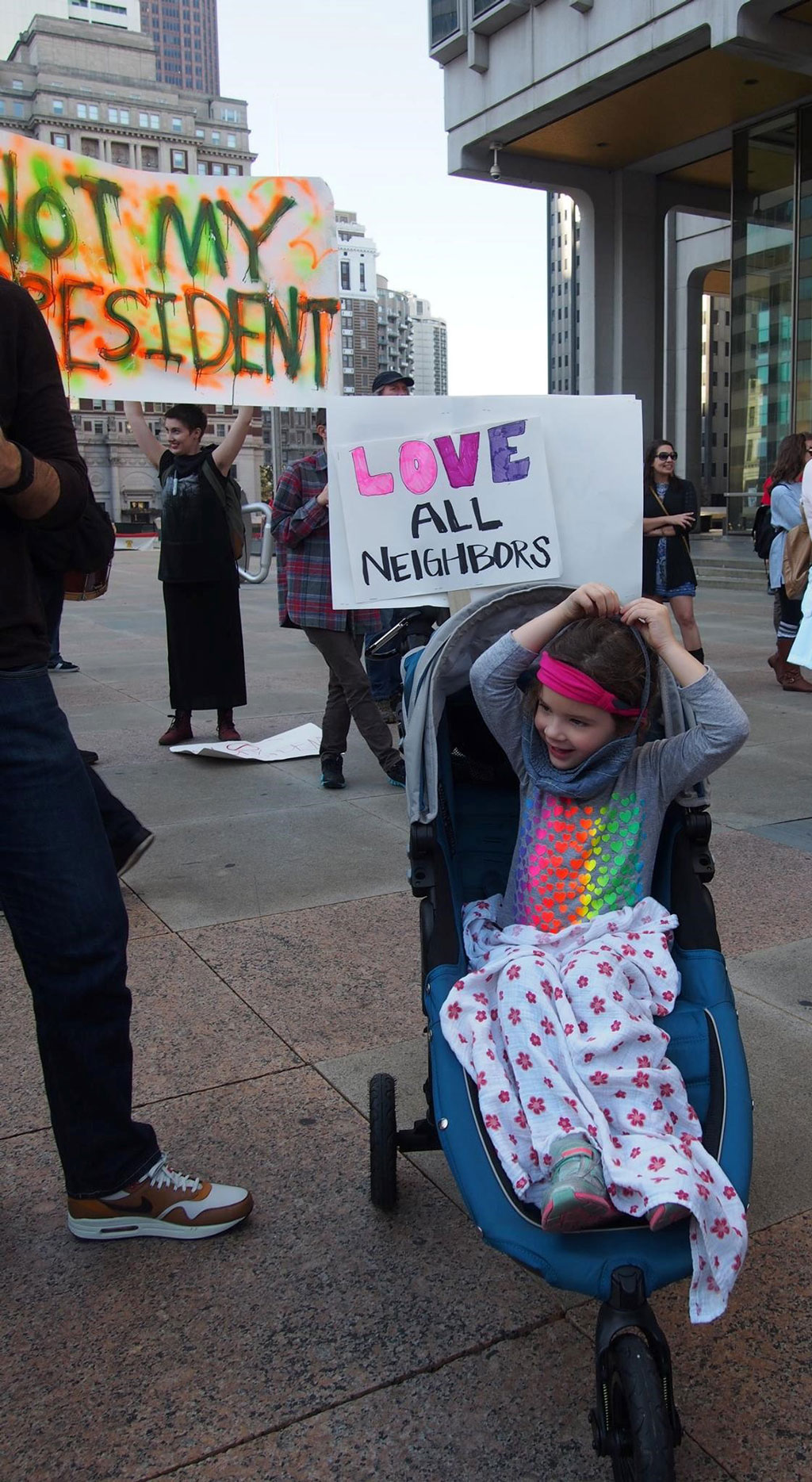 Together, we marched on Saturday.  Nearing the end of our route, I caught a man along the sidewalk’s edge videoing himself with his phone.

He was chanting, “sore losers! sore losers!” and goose-stepping like a  Nazi clown. I couldn’t look away. Later, I learned the man’s name is George Gallo. He may be a man, but he is also a troll.

George Gallo was goose-stepping, but my conscious mind barely noticed (a fellow protester confirmed what my subconscious knew). Apparently, I could not ignore this transgression. And so I went over to him, thinking—I think—“put your body in front of him, take him out of the scene.” But all I did, really, was yell nonsense in his face as he gleefully chanted, “sore loser!”

I knew, of course, that George Gallo was hoping to incite reaction… I wasn’t even surprised when a friend, who had seen Gallo’s video posted somewhere, texted me the video with a note, “I’m sure you’ve seen this…”

In that moment, though, I couldn’t stop. I betrayed my highest ideals, my sense of reason, and the peaceful, positive defiance of the march. Worse, I lost an opportunity to ask Mr. Gallo if he thought that perhaps Freedom of Speech, voted into law just a few blocks away, wasn’t my right. Or, what specifically did he think of the right to Freedom of Religion, memorialized in a sculpture and placed directly across from Independence Hall, which also stands in front of the National Museum of Jewish History. Or even, as he goose-stepped along Market Street, what did he think of Jews in America? 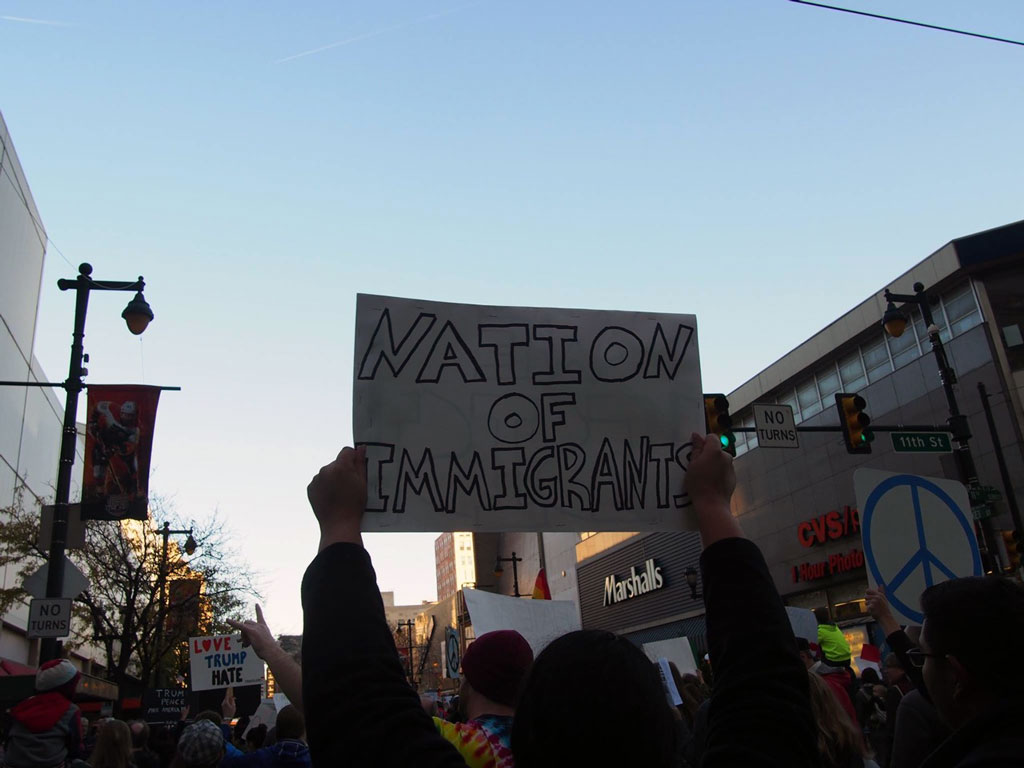 I might have asked him if he believed the election was a kind of contest in which one side is vanquished and the other side goes home. If his side won, why does he care what I do or if I choose to blow a Saturday afternoon on a march? Does our disorder offend? Does it remind him that democracy is a living, moving thing? Perhaps he wishes it closed up and locked away?

Mr. Gallo, do our signs offend you? Are you afraid of queers? Are you troubled by clean air, auto safety, headscarves? Have you lost your own in-born sense of mercy? Of empathy? Will you join the deportation squads? Will you register Muslims? Will you continue to mock, to offend, to belittle? Have we, with our hand-drawn signs, our peace flags, our rainbow flags, our voices in unison undone something inside you? Have you been provoked? Have you, poor troll, betrayed yourself?

Lena Popkin is a junior at Philadelphia’s Central High School. She is a news editor of the Centralizer Newspaper and a Cleaver Emerging Artist.