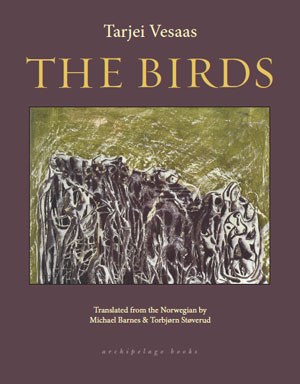 Had The Birds been written from the perspective of another character other than Mattis, a dim-witted near forty-year old, it probably would have had a different title—The Lumberjack, maybe, or some other word that references one of the major events in the novel. But that’s the point: the perspective, usually in third person but sometimes slipping into first person, is Mattis’ and thus the story is his. Although often the characters in a book share the same events, they do not share the same story; for that, as Norwegian author Tarjei Vesaas shows brilliantly in this moving novel, depends on the way we see things, on the importance we give to those events we share. For Mattis, the most important events in the novel concern the birds.

Mattis and Hege are brother and sister living in a solitary house by a lake in a remote village in Norway. Hege knits sweaters to support the both of them, while Mattis has never been successful in finding work. Why? He’s not one of “the clever ones.” This vague description is all the insight into Mattis’ condition you really acquire; clearly, he is mentally disabled in some way and has trouble interacting with others, but the extent of his state is hard to grasp. Perhaps Vesaas is telling us that his specific condition doesn’t matter so much, for what Mattis is, ultimately, is a social pariah in a small community, a fact that he is painfully self-conscious of; he’s a person whose view on things is never trusted, who must always cede to what the clever ones think.

Indeed, initially it may seem that Vesaas is trying to give us a classic example of an unreliable narrator, but really he seems to be questioning the idea that reliability, conformity to a certain view of things, is what we should want from people. Mattis has trouble expressing himself, that is undeniable, but for him, others’ perspectives are just as hard to understand. When the pivotal event of the novel (for Mattis) occurs at the beginning of the book, Hege, his sister and only confidante, barely acknowledges it. The event: a woodcock has begun flying over Mattis’ and Hege’s house as part of its daily repetitive journey. A woodcock hardly ever changes paths, so Mattis takes this as a thrilling sign of things to come. Hege does not, and when he begs her to come outside and see the woodcock fly, she replies:

“Let’s talk about this in the morning, Mattis. Go to bed now, do you hear?”
To Mattis it sounded like madness—throwing away a chance like this.
“I’m telling you it’s going on now. And you don’t want to come out and see? I can’t understand you. Nothing seems to mean anything to you.” 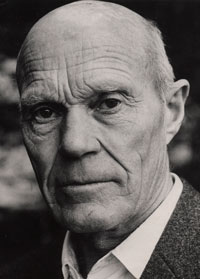 If we are surprised by the way Mattis behaves, Vesaas shows us how Mattis can also be surprised, in turn, by others. Though the book doesn’t make us quite start seeing things the way Mattis does, it does grant his world much symbolic power. One of the major themes running through the novel is the role of fate in shaping our lives. Vesaas partly hints at this with the constantly knitting Hege, one of the clever ones whose view of things determines Mattis’ life. He also aligns many of the events in the novel with Mattis’ portentous way of seeing the natural world. For example, Mattis unwittingly informs a hunter one day as to his beloved woodcock’s flight path, which results in the hunter waiting in the bushes that night and shooting the woodcock down.

Perhaps Mattis is the only character who finds this very significant, but by the end of the novel, the parallels between the woodcock and the more “important” events in the novel seem clearer: Hege begins to distance herself from Mattis due to her relationship with a lumberjack Mattis brought into the house. Similarly, Mattis notices with great anxiety that one of two aspen trees the townfolk have nicknamed Hege and Mattis has been struck by lightning, and he wonders gravely for Hege’s future: perhaps he was right to do so, for ultimately, when Hege drifts from him, he does feel left alone, like a single white aspen tree in a field of green.

The most poignant aspect of Mattis’ search for some presence of fate, his desperate desire to give an overriding meaning to all the things that happen around him, is his self-awareness of being different and lesser. It is this he ultimately wants to find meaning for: how else can he keep living off the work of his sister, being the laughing-stock of the town, dreaming of girls that will never be more than fantasies? To Hege, the pointlessness of her life does present itself, for instance in a night of tears when she tells Mattis, “I just don’t know why I’m alive.” Mattis immediately classifies these as “problems that [go] completely beyond his understanding.”

Yet if they go beyond his understanding, and indeed he never openly mulls over them, they remain stuck somewhere inside, influencing the way he searches, continuously, for a justification for the way the world is, or for a sign that it will change. He does once articulate his fears, asking the wife of a farmer (for she is a clever one and can handle these questions): “Why are things the way they are?” She just shakes her head. And that’s all you get, one surfacing of a question that pains you for the rest of the novel: why are things the way they are? Why can’t Mattis be—different? Or is it the world that should change?

At the novel’s end, which I won’t spoil, Mattis finally does make a choice about his life, and it is—ironically—to leave his fate completely up to chance. Instead of acting based on what the clever ones say, he actively “place[s] the whole thing in the hands of others.” Ultimately the way Mattis deals with the injustice of the world is to remove his own agency from it; what he doesn’t realise, of course, is that this is his most active choice, and thus perhaps Vesaas is implying we cannot truly escape the burden of having to justify our lives.

This meaningful, thought-provoking book derives much of its beauty from the simple language it uses to tell its story. The perspective is Mattis’, and thus it would be dishonest to dive into paragraphs of metaphor or add unnecessary detail. Some might think this simplicity impoverishes the text, but really it brings to the forefront the meaning behind everything that is said. Mattis’ world may not have many words, but Mattis grants to all the words he does use a kind of power that goes beyond the trivial way in which we normally speak. The book begins, for example, with a lovely scene in which Mattis compares Hege to lightening. He does this, though, mostly for the thrill of saying the word lightening, which he sees as a dangerous move in itself.

Throughout the rest of the text, words continue to function in this quasi-magical way; the articulation of thought is not merely a process of transformation, but one of enrichment, for the thought acquires more power and legitimacy once it is said. “Anna and Inger,” Mattis repeats at various points in the novel, without further explanation. Those two names represent perhaps the best day of Mattis’ life, when two girls showed up on an island where he was resting and then were rowed about by him, without once acting as though he were different from them in any way. Articulation, therefore, even in the form of Mattis’ highly ordered and structured thoughts, is a way to understand and pick out what matters in the confusion that is life. “Anna and Inger,” Mattis tells strangers, simply, which is as good as reminding himself that he is worthwhile as a person.

So the reliability of the story Mattis’ tells is not the key element of the novel. Clearly, he is being as honest as he can, but equally as clear, there are things that slip his understanding. What is most interesting, however, is the way Vesaas makes Mattis articulate his perspective, for what we witness in the telling of a story is the unique way a particular individual has found to structure and justify the world around him.

Melanie Erspamer studies English Literature and Philosophy at the University of Edinburgh. She is half-Italian and half-American and has lived most of her life near Boston. Her work has been published in The Purple Breakfast Review, Nomad Magazine and Unknown Magazine, and her one-act play was performed at the University of Edinburgh. With her sister, she also has been running an anonymous literary magazine based in bathroom stalls, called Bathruminations. In fall 2016 she is studying abroad in Barcelona.