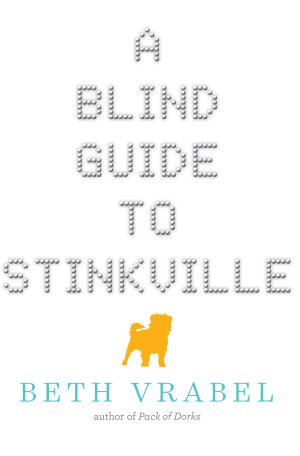 A Blind Guide to Stinkville is a story told through the fuzzy vision of 11-year-old Alice, whose albinism and near blindness give her the perspective to uncover hidden stories of the people in her new town. The genius of Vrabel’s approach is that the reader meets the other characters through nuances of feelings and impressions rather than stark physical descriptions. The book is not a page-turner plot-wise and there are no major catastrophes; instead the novel peers beneath the superficial to reveal important lessons about what it means to be a member of small town community.

Despite the fact that Alice has to use a magnifying glass to read a book a few inches from her face, she is the only person in the story who truly sees what is going on around her. Initially, Alice thinks her new hometown of Sinkville, aka “Stinkville,” is a horrible place dominated by the terrible smell emanating from the local paper-mill. It’s nothing like where she grew up in Seattle.

However, as Alice reveals the stories of the townspeople, Stinkville becomes a much less stinky place. Alice finds the beauty buried beneath the surface of Stinkville —like her brother’s crush on a local girl, or the fact that the owner of the diner and the mayor of the town are in love with one another, or just the deliciousness of a specially made PB&J milkshake at the diner. These observations are given voice in an essay contest to showcase the town’s success stories, which Alice seizes as the perfect platform to ask questions about the town’s history and its inhabitants. It is clear the author has a love for small towns and their quirks. Home is where the heart is, even if it smells like rotten eggs.

Perhaps the best lesson for young people in the book is one that Alice keeps telling herself: “Be your own advocate.” Previously, Alice’s albinism and near-blindness forced her to rely on others, but, in her new town, Alice uses her cane and sheer will-power to explore. Alice’s story reminds us that we are strongest when we believe in ourselves. And Alice’s aptitude for getting people to reveal themselves helps the reader realize that being different is a strength rather than a weakness.

A Blind Guide to Stinkville takes the common approach of using the struggles of the main character to sketch out the characters of a town where everyone is fighting their own battles. Through Alice’s daily first person narrative we learn about Alice’s family and the townspeople, and gradually Alice’s albinism becomes just one of many issues that people struggle with in the book. We witness her mom’s battle with depression, old Mr. Hamlin’s fight with his son about being put into a nursing home, and a young girl’s attempt to hide her dyslexia. At first it felt like too many issues packed into one book, but the more I stepped back, the more I realized that Vrabel shows us what real life is like—an often uncomfortable jumble of hard-to-talk about topics. 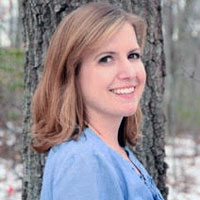 Though Vrabel’s choice to contrast Alice’s freedom in her former home with her initial helplessness in Stinkville feels a bit unrealistic at times, it serves to illustrate Alice’s dependence upon her family. The reader easily perceives that Alice was hindered very little by her disability in her former home of Seattle, which does dramatize the difficulties Alice faces as an albino in her new town. If this were an adult novel, Alice’s ability to see the truths around her despite her blindness might feel contrived. However, the shifted approach of an albino character presents this trope in a manner accessible to younger readers.

At its heart, A Blind Guide to Stinkville is an homage to small towns and a reminder that everyone is fighting his or her own battles. The town and its characters come to life with Alice’s colorful and intuitive descriptions. This book is perfect for a classroom library or for any young reader who feels like an outsider. Vrabel does a fine job showing us that Alice’s disability is one facet of who she is and not a crippling condition controlling her life.

Mandy King works as a digital marketing strategist, spending most of her days writing and editing content that lives on the web. The best job she ever had was head of the events and marketing program at Boulder Book Store, one of the U.S.’s largest independent bookstores. To her mind, the perfect day starts with a cup of tea and ends with a bag (or two) of new books.