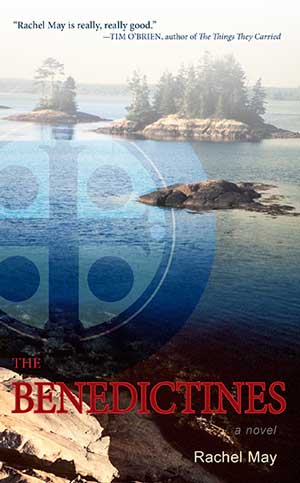 THE BENEDICTINES
by Rachel May
Alleyway Books, 115 pages

Rachel May’s The Benedictines opens like a film. There’s are white-capped mountains and rolling hills, narrowing into focus on a Benedictine school campus where our narrator, Annie James, teaches writing. It’s on this campus where we tour her emotional landscape, as she struggles to understand her relationships with others, as well as her own religious faith, within the structure of Benedictine life.

Told through a series of vignettes, we puzzle together Annie’s life at the school, where she sits at a remove from those around her. We slowly learn about her students, her “Devout Roommate,” some of her suitors, the monks, and the staff. May intersperses excerpted chapters from The Rule of Saint Benedict, faculty handbooks, memos and emails from the school, and the haunting story of Mr. Souci, who died, mysteriously, three years prior. We stand at a distance from Annie, watching the lives around her evolve, as she tries to find her place among them.

Annie is, at times, smug in her separation. Coming from Utah, she doesn’t understand the physical landscape of Maine;, the wind and ocean next to the whitecaps. And this stranger in a strange land metaphor extends itself to her religious life. As a “lapsed Catholic” she feels the strict Benedictines are living a myth. They are playing a role, only making it look like they’re following along, but instead pursuing their true desires behind closed doors. “You can not take away lust,” she narrates. “Lust will make itself known. You can not talk it away.”

In the classroom, Annie allows her students to talk openly about their sexual desires, and she tries, unsuccessfully, to nudge some of the other teachers and staff to look away from her own romantic life, amused by the rule that she can’t let members of the opposite sex into her faculty housing. Slowly, she learns, as we do, that others may also be secretly giving into temptation. 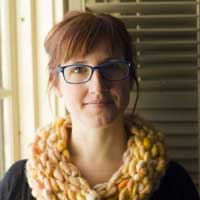 But there are times that she envies the faith around her; the belief that things are in God’s hands. She begins to envy “surrender” suggesting that living without faith is a constant battle of will. And there’s a deep yearning, throughout the book, for companionship and community; her loneliness, palpable, caught in this lush but foreign land where she does not belong.

May is strategic in exploring both emotional and physical intimacy. The stronger and deeper Annie’s relationships are with her students, friends, and romantic partners, the more May places her as part of the actual landscape and campus grounds. Without completing neat and tidy arcs, characters are introduced and slowly come into focus, like the zoom lens of a camera. May strips her prose bare, leaving us with only the essentials, as she does here:

I imagine being here, in this one place, is like being in a long marriage and the way you shift and mold to one another as time goes on.

This shifting and molding around others is at the heart of the story and, as we dance around the many people within Annie’s gaze, we start to get a clearer sense of how their stories connect. Even in places where we’re given just a glimpse of characters—there’s a short but engrossing section where we’re introduced to people at the grocery store—a familiarity exists within each sentence;, a feeling that we have known these people and will continue to encounter them throughout our lives.

Much like the very first passage of the book, where she narrows from a wide, borderless, panoramic view to the claustrophobic Benedictine campus bound by lists and rules, throughout the novel there’s a fluidity to May’s writing. With razor-sharp insight, she asks large questions of faith and belonging through an increasingly focused and intimate portrait of one woman’s year with the Benedictines.

Melissa Sarno is a writer and producer living in Brooklyn, NY. She studied Communications at Cornell University and received an MFA in Screenwriting from Boston University. After a few years working in television production, she made the switch to children’s media. When she’s not writing elegant prose for preschool toys and games, she writes novels and short stories. She’s currently seeking publication for her first novel and is at work on her second. She blogs at http://melissasarno.com.