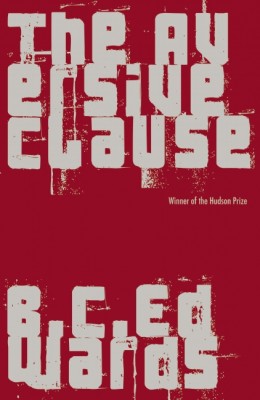 B.C. Edwards’s short story collection, The Aversive Clause, alternates between gentle poignancy and visceral revelation, often within the same story. To read his work is to ride a manic roller coaster through a gritty Wonderland reboot. Like Alice, readers will shrink and grow, and know things they cannot un-know. Without being heavy-handed or didactic, Edwards explores and explodes the socio-political fabric of contemporary society and in so doing, pulls readers into the conversation.

Edwards’s style and thematic resonance are evocative of Ray Bradbury. In particular, “The Providence of Angels” echoes several stories from The Illustrated Man. The desperate masses begging for healing outside Ty and Mac’s door calls back to the emotional hunger of the men in “The Visitor.” The random man at the rails, searching for the Angels to give him an external impetus for goodness, echoes “The Man’s” Captain Hart in his quest for Christ to give him peace. Much like “Zero Hour,” the story ends with the coming of the supernatural beings, whom only a select few can see at first, and whose breakthrough to this world becomes finally, terribly real. It is far too easy to assume that the unseen forces operating behind a curtain must be acting for the greater good; Edwards’s story urges us as a society to question everything, and perhaps to do the work ourselves in order to reach the goals we claim to want.

The dystopian depictions throughout the collection read like a conspiracy theorist’s nightmares, effectively indicting and predicting some chilling contemporary ills: corporate conglomerates that squeeze out small businesses and eradicate unions, leaving the average worker to fend, poorly, for himself, desperate job seekers going to interviews that literally kill them, and quiet bio-genetic weapons that lead to the zombie apocalypse. Yet Edwards often has his characters respond to hopelessness with self-aware humor. In “Eugene and the News,” Eugene describes the famous beast that will eventually consume everyone as the color of “those awful khaki’s which you insist hide your hips . . . which they do not.” The job-seeker in “Spots” weaves a fantastic tale in an attempt to excuse his lateness, and for a while, both he and the interviewer participate in a farcical call-and-response storytelling, mimicking the implicit suspension of disbelief in which readers and writers engage.

The collection’s other thematic focus is endings: of relationships, lifestyles, and/or the world. Endings are hard. These stories do not make endings feel any easier; they feel caustic, apocalyptic. This is a truth that this collection illuminates: endings hurt, even when they are the end of something that was bitter and miserable anyway. Drugs and alcohol, numbing tools of the depressed, neither deaden the pain, really, nor stop the end from coming. You will still end up in a dark forest outside Moscow, drummed out of town by the upgraded version of yourself, or sitting, skull-busted and vomitous, on a moist couch in a strange house.

But in the spaces leading to the end, we see love so abundant it hurts. The protagonists, and Edwards, have a gift for seeing the imperfect beauty in their partners, and subsequently drowning, just for a moment, in a well of love. In “The Providence of Angels”, even as we see Ty’s growing fear of both Mac and the Angles, he tells us that “Mac’s smile is like butter and chocolate.” In “Doppelganger’s Local 525,” Grange morphs into the image of his wife when he loved her most: pregnant and messy haired. And even though the story tracks the disintegration of his ability to provide for himself and his child, a brief look of love in his son’s eyes makes everything—not okay, but bearable.

If there is a guiding mantra to the collection, it hearkens back to a line from Yeats’s Second Coming: Things fall apart; the center cannot hold. Things do fall apart for Edwards’s characters. The center, though, is human connection; it is love. While the characters cling to that, they have a chance. When they lose that, when that center does not hold, they are lost. Even the advent of the zombie apocalypse does not end love.