I have lived and worked in such a small town as this. Quiet, nondescript streets link manicured lawns and well-kept homes; neighbors guard their privacy as they intrude on the lives around them, paying close attention to the comings and goings of others, particularly those of relative newcomers. It is a strange mixture of the private and public, with odd boundaries that seem fluid—simultaneously hiding and displaying glimpses of interior narratives, opinions, rumors and expected codes of behavior.

My town is a place that echoes David Lynch’s fictional Lumberton and “things that are hidden within a small town… and things that are hidden within people.” Some of those hidden things were revealed during the renovation of the house my wife and I live in—one of the neighborhood’s knock-off mid-century modern homes. Stripped bare, uncovered surfaces inside the structure tell fragments of distant family histories, many of which are highly private; others merely reflect the mundane public face of the neighborhood.

This series of paintings and drawings chronicles the process of fitting into—or not fitting into—a closed community, as well as the discoveries of long ago buried personal stories and events. The works are done on site, from life. As a result, the surrounding environments become integral to the process of making and thinking.

Often, unanticipated moments help shape formal and conceptual directions. Many of these decisions find a place in the final image, but just as many move from a central focus to a periphery status, which may or may not appear in a later image. In this and other ways, working from life is central to the images’ fluidity and flexibility around visual and conceptual possibilities. 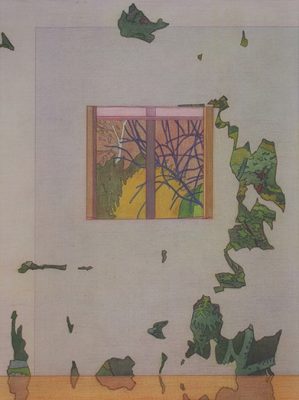 Mark making is also a central focus of this body of work. Marks are used directly with little, if any, rendering or modeling. Uninflected, each mark carries as much information as possible, combining with other marks to construct a greater complexity of form, space and light.

Such a process requires a high degree of focus: shape, line, mass, color, gesture, and spatial relationships are all considered and combined simultaneously. A dichotomy exists between this process of close observation and the final images, which often appear to have a strong graphic quality, as if the images came together in a single pass, or through a paint-by-number template. The ability of the paintings to flip back and forth across the boundary or edge between a flat surface and the illusion of depth, as well as abstraction and figuration, echoes the often permeable boundary between the past and present as well as the private and the public.

Other elements in the work refer to these dichotomies simultaneously. Windows, although not included in every image, play an important role throughout most of the series. Clearly, they function both as pathways into and out of the private and public. Windows rarely appear unobstructed—they are usually coupled with an element that responds to or blocks the outward view. This response or blocking corresponds to a conscious sense of community and the decision to actively engage or resist exchanges and communication with the neighborhood. 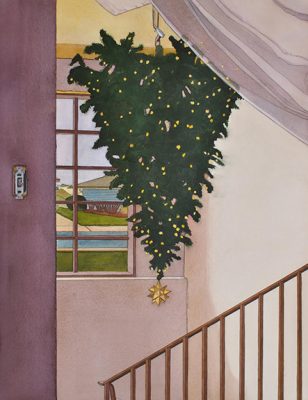 Semi-opaque plastic drop cloths function in both roles. Originally, the thin plastic tarps were used to isolate parts of the renovation within the structure, but they soon began to play a greater role in an evolving narrative or context.

In the piece Color Test, Mailbox and Elmo’s Stairs (2013) the drop cloth alludes to the flowing curtain that appears at the start of Lynch’s 1986 film Blue Velvet.

These thin sheets of plastic refer as well as to tragic private and public events: in For Newtown (2012), the drop cloth, while still evident in the upper right corner, has been pulled back to reveal a holiday tree hung upside down in a stairwell with a large window that looks out onto the neighborhood. This watercolor was completed at the time of the Newtown shootings and responds to that horror with a communal view (both from the inside and outside) using a well-known symbol frequently tied to the concept of peace. By setting this object on its head (and literally hanging it), many of its collective associations are subverted. 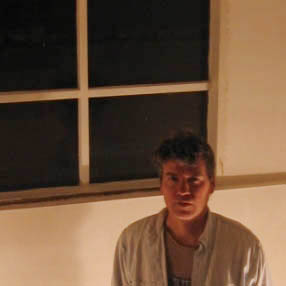 Sawyer began his series Spring Street in 2012. Between 2010 and 2012 in southern New Mexico, he completed 36 Views of Baylor Canyon, a series of color pencil drawings focused on the intersection, or collision, between a private, domestic world and a larger, more far reaching global view. Since 2003 he has continued work on another series, Julia’s Garden, which examines aspects of love, language and the landscape.

More images and information may be found at his website: thomsawyer.net