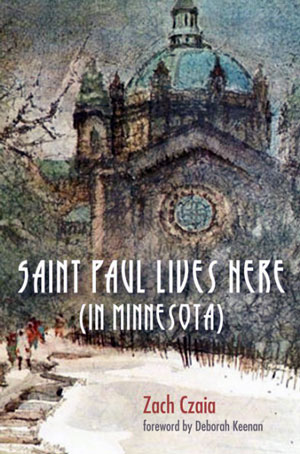 Zach Czaia’s debut poetry collection Saint Paul Lives Here (In Minnesota) is a poet’s response to revelations of sexual abuse within the Archdiocese of Saint Paul and Minneapolis. When the profane is unearthed beneath the divine, long-laid foundations begin to crumble. Perhaps no more clearly has this been observed than within the Catholic Church, where investigations of sexual abuse have spanned decades.

But Saint Paul Lives Here (In Minnesota) moves beyond the accusations, the guilt, the repercussions. These poems explore the connection between spirit and body. They pace between the cathedral and the high school classroom, the Minnesota cold and the heat of Belize. Saint Paul walks beside Charon the ferryman. In this collection, it matters that the suffusing voice is a Catholic one, echoing in the midst of a broken church. It is as if the poet is reaching out to the reader with one hand and saying, yes, there is darkness; let us walk through it together.

The collection begins with the body, with the power of skin against skin. “Flesh is funny—how saveable and markable it is,” says the speaker of the opening poem, “Flesh is Funny.” The speaker goes on to describe “how a touch, for instance yours, / can go on living its life within / for days, months even, after it’s gone.” In this way, we are introduced to both desire and despair. The speaker recognizes the beauty that can come from a touch, but also the possibility of destruction, a foreshadowing of the encounters ahead.

This destruction is embodied in four poems that first remember childhood interactions with and then address Father X, an unnamed priest. In “Why I Won’t Publish Father X’s Name, Though the Newspapers Do,” the speaker reflects on what it means to remove one name and replace it with a new one. Is this a gift? A mercy? “Because Christ was crucified on a cross, and the cross is a tipped sideways X, and you, Father X, are a cross to me,” he concludes. Past the pain of betrayal, past the shadowed memories, the speaker walks forward, carrying the weight of others’ sin. There is no easy way towards forgiveness, as the speaker reflects in “What I Am Most Angry About”:

He has forgiven you. It is enough
for now, this forgiveness in the third person.
He has thought about it a while
and it’s all he can give now, nursing
as he still is some anger
but grateful mainly for escaping greater danger.

This gratefulness, uncomfortable yet also welcomed, pervades the middle poems of the collection as well. In the high school classroom, a teacher remembers early failures, students throwing dictionaries, and later successes, watching a student cut class and then rescue an abandoned animal. While Czaia’s poems about the classroom do not hold the same emotional weight or tight diction of other poems in the collection, they do allow for a turn toward the unbounded nature of childhood and the exuberance of poetry. This awareness of the very nature of the poem arises in nods toward Dante and Blake. In “Yes, Blake,” the poet writes, “God could make a tiger, / and so God did make a tiger, / and it was good.” The line between poet and creator, poem and creation begins to blur. And in “If Dante Were Alive Today,” the poet himself becomes aware of his own agency and intent: “And, yes, this poem is a stone / and I aim to hit.” 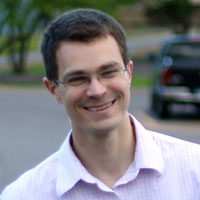 In the latter half of the book, a variety of figures appear. Moses, disgusted by Pharaoh, finds himself unable to speak. Jonah prays for a “badder God.” Peter relives the cleansing of the temple, and his wife describes her own calling. Marcus Borg captures the dust of Jerusalem on his video camera. Auden appears in a dream. “You are re-telling the parable of the sower and the seeds,” the speaker remembers. “You are worrying over it with me.” And that is the task of these middle poems: allowing worry to show its presence amidst the holy, a re-telling that itself allows for biblical stories to become living and active.

There are times when phrasing verges on the sentimental. This can appear in lines like “the kiss of ink,” and in Minnesota snow, which falls perhaps a few too many times (and this is coming from a native Minnesotan who greatly misses the snow). But, overall, Czaia’s poems are able to transcend their own ethereal nature by always returning to the temporal, to the body. The closing poems in the book find their focus around a dancing congregation, a group of unruly boys watching their teacher doing push-ups, girls possessed by demons. The final hybrid, long-form prose piece, “Benque, 2005,” ends with these lines: “And I will wait as others wait in the valley, to be remade, to dance in my fitful way with the other resurrected bodies. I will wait to be clothed with flesh.” This speaker has not reached reconciliation, but they have embraced patience. This poet has brought his reader through the valley, and will wait there alongside them. Despite pain, despite betrayal, there is a hope that forgiveness remains a possibility:

Hannah Kroonblawd is a PhD candidate at Illinois State University and a recent graduate of Oregon State University’s MFA program. She lived in Asia for a few years, and once she met the governor of Minnesota at KFC. Her poems can be found in or are forthcoming from BOAAT, The Chattahoochee Review, and Sycamore Review, among others.