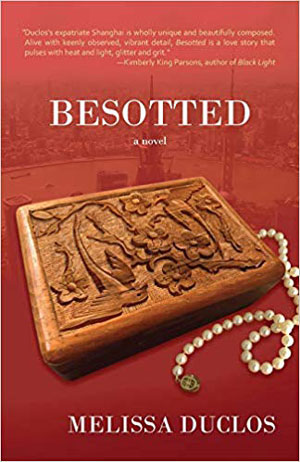 Melissa Duclos’ debut novel Besotted is a lyrical, urgent love story about two young American women, Sasha and Liz, who run away to China to try to find themselves. Sasha has fled all the trappings of her privileged life, including her father who disapproves of her sexuality. Liz, the object of Sasha’s desire, has packed up and left her predictable existence and Amherst-educated boyfriend, having grown tired of being an afterthought of his otherwise-enchanted life.

When the novel opens, Sasha is a teacher at an international school, who is helping her boss find an additional instructor. She’s drawn to Liz’s resume because she believed she “needed to be” working with her (a certain je ne sais quoi, I suppose), and she tells her boss there are no other applicants. When Liz arrives, she’s put up in a hotel temporarily, and Sasha, who is desperately lonely, asks her to move in. After mornings sipping jasmine tea and evenings drinking at trendy expat haunts, they fall in love. But then two other characters arrive on the scene: Sam, Liz’s Chinese language partner who meets her at Starbucks for Frappuccinos and grammar lessons, and Dorian, an entitled, handsome American architect who loves his liquor and “was always winking.” When this group collides during happy hour at a popular drinkery, everything starts to unravel.

The plot seduced and sizzled, but it was the voice that kept me in its grip.

The plot seduced and sizzled, but it was the voice that kept me in its grip—a first-person omniscient point of view. The story begins with Sasha, who is generally the narrator, speaking in first person, but there are points when this restricted perspective shifts into omniscient. “While I sat in front of our chicken dinner that night, Liz stared out of the window of her cab, trying to put our lonely apartment out of her mind.”

I had never read such a thing, and while it was, at first, slightly puzzling, the more I read, the more I became enamored with the technique. By starting in first-person and then switching to omniscient, it feels as if Sasha is cascading into the narrative, permeating everything and everyone. We jettison from her head into the minds of Liz, Dorian, and Sam and are held captive. Her hunger for Liz, driven by her loneliness, becomes insatiable. At one point, Sasha learns that she is always in Liz’s dreams and says, “I felt like a conquering army: triumphant.” In another scene, Sasha swipes lesson plans from another teacher for Liz, who is unprepared and seemingly clueless. Sasha tells Liz to make them her own, but in the end, she reformats and switches things around herself. The last line of the scene states, “At the time, I felt in control.”  While Sasha has Liz in her grasp, it’s passages like this that show her hold is temporary.

The tension created by alternating between non-omniscient and omniscient sets ups a conjoined voice that sits on the reader’s shoulder and chatters, changing lenses, at times whispering in our ear, then becoming distant, hovering mid-sky in the landscape of the story, which infuses the narrative with an element of surprise.

The tension created by alternating between non-omniscient and omniscient sets ups a conjoined voice that sits on the reader’s shoulder and chatters, changing lenses, at times whispering in our ear, then becoming distant, hovering mid-sky in the landscape of the story, which infuses the narrative with an element of surprise. It’s this toggling between perspectives that sets us up for the lens of memory through which the story is told. Like the voice, the remembrances are in flux, as is the structure, which is non-linear, much like one’s own recall. A quote on the first page from The Blindfold by Siri Hustvedt sets up this filter—a kaleidoscope of sorts—beautifully. “Distortion is part of desire. We always change the things we want.” After reading this, I wasn’t surprised that throughout Besotted, Sasha offers disclaimers about what she’s telling us. 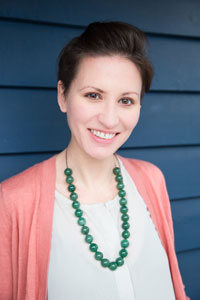 In an early passage, Sasha describes Liz unpacking when she arrives at the hotel in Shanghai: “So she put roughly half her clothes into the small dresser, choosing them arbitrarily, and as she did, noticed a green glossy envelope lying on the dresser top. I know because I put it there. Of some parts of this story I’m certain.” The last sentence implies that there are other parts of the narrative of which she is not certain. These admissions crescendo as the novel progresses and at one point, Sasha justifies her jumbled recall: “Memory shapeshifts. That’s not a trick or malfunction, but its very purpose. We make sense of things by rearranging them.” Near the end, Sasha admits: “What happens next is hazy.” However, it’s important to note that many of the scenes in the novel take place at bars, where lots of folks get wasted regularly. If we assume that this is all being told to us by Sasha, she might just be getting blotto, which may add to the blurriness of her account. Nevertheless, only after reading the entire book did Hustvedt’s quote about distortion of desire ricochet inside my mind. Sasha doesn’t seem to be misleading us on purpose. Her pain obscures her broken heart; she is constitutionally incapable of telling us the truth.

What the lens of memory calls into question is the difference between perception and reality, what is said and what is meant, or more pointedly, what Sasha thinks is going on versus what Liz thinks. (Yet we can’t know what Liz really thinks, as it seems Sasha, disguised as the omniscient voice, is in Liz’s head and telling us what she believes she feels.) The first sentence in the novel states this predicament, the tension between denotation and connotation: “I once considered the space that exists between what people say and what they mean to be my native habitat. Until Liz.” Right here, we know that Sasha has been stumped and Liz can’t be trusted, which sets up doubt in our minds about what we’re about to read. But when this doubt intersected with the story, I felt a bit unmoored. Despite this, the impressionistic narrative we’re left with is nonetheless irresistibly compelling.

Duclos’ rapier wit is also delicious. In one section, when Dorian and Sasha are talking, Sasha says that after Shanghai she might move to the West Coast. “Expats often talk like that, listing cities they plan to move to the way normal people discuss movies they’d like to see.” And in scenes taking place in Starbucks, the cafe is described as “…neutral territory. The United States of Au Lait. The People’s Republic of Chai.” In addition to the humor I was also struck with the refined, evocative prose. When Sasha describes Liz’s laugh, she claims that it sounds like “glass shattered in ecstasy.” When recalling a previous evening, Sasha says, “The air here the night Liz arrived was soft and suffocating like tufted felt…” There are many exquisite passages, and after I read one, I longed for another.

Yet it wasn’t just the humor and satisfying prose that pulled me in. Duclos employs personifications of Loneliness, Anxiety and Love, which are threaded throughout the story and function like narrators in a Greek tragedy. After Liz moves in with Sasha, we hear from Loneliness and Anxiety. “Loneliness had vacated the apartment, but she’d been replaced by a jasmine flower called Anxiety.” The novel possesses quite a few personifications of Love, and there are plenty of sublime passages to choose from. “Love didn’t get her feet dusty, couldn’t tolerate the creep of grime up her shins, the slick of puddles on her soles. When Love stood quite still, as she so often did, she could feel the pull of mountains and rivers and half-constructed skyscrapers and eight-lane highways and movie theaters and the quiet parks with their untouched grass circling around her bowed head.” Duclos also paints crisp, tactile pictures of the grittiness of Shanghai, so much so that afterwards, I felt slightly sullied, but it’s her poetic rendering of Love’s voice at the end of the novel that finally impaled me. Heartbroken and alone, Sasha is leaving the city for good. “Love cranes her neck, looking up and up and up, searching for the dark. She wishes for stars. She says goodbye to Shanghai.”

The core of Sasha and Liz’s story can be summed up in this sentence from the novel: “Everyone has a heart stitched back together, the scars they try to hide.” This resonated throughout the text and felt like the response to another quote of Hustvedt’s on the first page. “But all attractions are alike…They come from an emptiness inside…Something’s missing and you have to fill it.” Both Sasha and Liz have wounds, gouges in their hearts. Sasha has baggage from previous lovers, and Liz is, in a sense, waiting for her boyfriend in Brooklyn to act. Sasha and Liz did, at times, appear to genuinely care for each other, but in some moments, their dynamic was akimbo, eternally tilted towards Sasha, who seemed to shoulder the weight of their collective emotions. Consequently, I never quite believed that Liz loved Sasha, whom my heart gravitated toward through it all. When I closed the book, I uttered aloud, “Poor woman.” 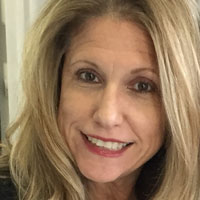 Lisa Johnson Mitchell is a freelance writer in Texas. She has an MFA from Bennington College, where she was an Assistant Graduate Fellow in Fiction.