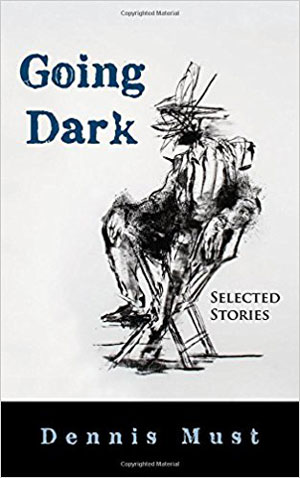 An aging and dying actor, a blank slate, a forgotten man. This is the first narrator the reader meets in Dennis Must’s 2016 collection of seventeen short stories, Going Dark. The narrator of the title story, though a nobody, shares much in common with the other narrators and characters of the stories that follow in the collection. Indeed, throughout the collection, Must’s characters wrestle with important questions about identity, sanity, and morality, as their lives are colored by the particular details of their lives: their cars, the music they listen to, and their work. . The reason the first narrator, the actor, considers himself a nobody is that his identity is simply that of every character he has ever played. His own identity is simply lost.

The characters in this collection have done everything from acting to working the night shift in a college town’s only hotel to working as a night watchman in the local steel mill. They seem to be reflections on Must himself, who has co-founded a commercial real estate firm, taught school, worked as a cabinetmaker, short-order cook, lightning rod installer, florist, bartender, and bellhop. Additionally, he spent some time working in a glass factory and steel mill as well as in construction and on a railroad. The book luxuriates in this richness as Must describes people from all walks of life trying to grapple with whatever stage of life they find themselves in at that moment.

For example, in the title story, “Going Dark,” the narrator first tries to respond to basic questions that he might be asked: “Where do you live?” and “How many children do you have?” “And your wife—who is she?” But in answering these questions, the narrator, the dying actor, begins to grapple with an essential question that come at that stage of life: “What is there to be afraid of?” For the narrator, all of the roles he has formerly performed and the way that those roles—those people inside him—demand attention, wanting to continue existing is “[t]he source of [his] deep anguish.” 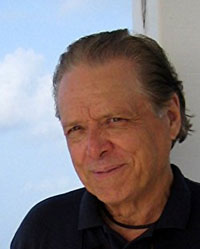 Many of the protagonists in the collection, some of whom appear in multiple stories, seem to be asking themselves “who am I?” For the dying actor “who am I?” is a hard question after playing so many roles and struggling desperately to create a singular identity as life winds down. The young narrator of the story “Marine Band,” Ethan, must ask himself if he has only been pretending to be someone else. When Ethan was a child a young soldier, Chester, played the harmonica, and when he died at war, Chester’s mother gave Ethan Chester’s harmonica. After performing for his fifth grade class, Ethan “[feels] ashamed” and “like a paper solider.” For Ethan, “[Chester] was the star,” and Ethan was only pretending. Ethan is also the narrator of the final story, “The Joining.” Here, he must decide at a young age if he will turn away from the destiny of a high school aptitude test to become a mortician, even once the opportunity to become a mortician presents itself, or continue on as a night watchman, a job he xxxx.. Wrapped up in that question is another question of what it must mean if his brother’s “fate was actually [his]?” His brother, Jeremiah, had the opportunity to become a mortician after falling in love with the town mortician’s daughter. But for Ethan, he believes that “[Jeremiah] was going to be punished for something [he’d] reneged on[.]”

From the beginning, Must keeps probing the difference between reality and fiction. Just what is real? In “Going Dark,” the narrator says to his conscience, “I have to see you, to look you in the eyes, if I’m to believe you’re for real.” In “Houseguest,” the main character, Edgar, wonders “if somehow watching [a phantom woman] will cause [her] to melt away, to evaporate.” All along in this story Edgar struggles to determine if this woman is really there in the house with him. What is real and what isn’t? In a story that seems to allude to Edgar Allan Poe’s The Tell-Tale Heart, Must explores the line between sanity and madness. Instead of a suffering from paranoia developed from guilt as in the narrator of Poe’s story, Edgar’s madness develops by first making up a backstory for himself that might satisfy the neighbors. He, then, dreams about hearing “the former tenant’s heart beating in the upstairs bedroom” before finding a photograph of a naked woman he begins to believe is living with him. From then on, it is no longer the ticking of a timepiece or the former tenant’s heart. It is the sounds of a piano or “a woman’s voice singing a Cole Porter medley.” Edgar hums classical works by the likes of Debussy and Ravel on his walks, but the voice he hears is singing a Cole Porter medley; he’s hearing jazz. Maybe that’s another clue about Edgar’s state of mind—what he hums and what he hears at night do not match.

With this line between reality and fiction, sanity and insanity, should the reader trust these narrators? There is no doubt that they struggle with ordinary imperfections. Perhaps, it is Must’s insistence on never totally masking these imperfections that makes the narrators deserving of the reader’s trust. After all, by revealing the narrators’ struggles and imperfections, Must makes them more relatable and believable. Even “Houseguest,” told in the third person, is told both by the third person narrator and in italics by Edgar himself. Who should the reader believe? Are they really even different narrators in the first place?

Must’s prose is poetic. In the last line of “Going Dark,” Must writes, describing what the end of the narrator’s life will look like, “And bystanders will drop jeweled rings and eyeglasses in his wake.” The crisp prose allows his counterintuitively to blur reality. For example, in “Boys,” the reader must repeatedly ask herself what is really going on in the bathroom where the former resident of the apartment had died. But Must makes sure that the reader is grounded in a real place with sentences that tell the reader concrete and specific details like “[t]he radio’s playing New Orleans” and “[the house] sat across from Hollyhock Avenue Grade School with an oak swing hanging by link chain from the porch ceiling, a garage whose walls were covered with license plates from every state in the Union, and a tiled bathroom [. . .] all white.” Even when the narrators and characters grapple with their identity, madness, or simply doing the right thing, Must uses his prose to ground his reader. In fact, his use of prose expertly highlights the split between what is real and what is not by combining poetic prose with crisp, concrete prose.

Taken together, Must’s collection is a perceptive exploration of very real parts of life—childhood, marriage, employment, old age, and death, to name several—that reveals how even ordinary and prosaic aspects of life can be full of anguish and can lead to mental deterioration. In the story “Wartime Stockings,” the narrator, James, must confront the darker aspects of his mother’s life upon finding her partially dressed “with her head resting on a cast-iron burner used for summer canning” and the “gas jets wide open.” He realizes that “[t]he dark chapter was hers alone” and that he “only was privy to its halcyon pages.” James concludes, though, by wondering “if somehow [he] should have understood.” Maybe he should not have missed his mother’s anguish. In this collection, Must ensures that his reader will not make the same mistake. We must not overlook the anguish that accompanies even the most ordinary aspects of life.

A GREATER MUSIC, a novel by Bae Suah, translated by Deborah Smith and reviewed by Justin Goodman