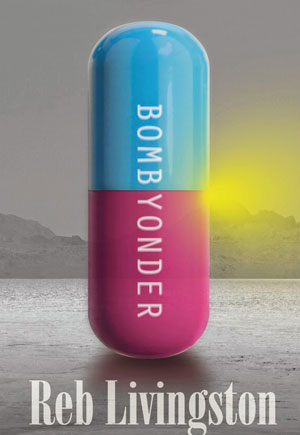 Welcome to the crater. Keep your head down, your eyes open, and try not to lose your lunch…or your mind. Your guide on this journey is one of literature’s most unreliable narrators: a murderous, narcissistic, yet oddly appealing young woman on a quest through the bombed-out wreckage of her own psyche, in search of a past she can hang her hat on, a future that tells the truth, the real nature of her bomb-maker father’s legacy, and a little birdy that might make everything turn out okay.

Reb Livingston’s literary forbears are legion. In this compellingly daft, lyrical, and mind-expanding novel we find traces of Sophocles, Lewis Carrol, Vonnegut, the Nabokov of Pale Fire, Hunter S. Thompson, Gertrude Stein, and Shelley—both of them—all run through the cerebral cortex of Tim Burton, put in a pill and swallowed whole by Livingston, the effect of which is an acid-trip of a novel that requires every bit of guile and courage a reader can muster. Livingston is best known as a poet, (with two critically acclaimed books and a Best American Poetry appearance to her credit) and her poetic sensibilities guide this book: not magical realism, but hyper-realism smashed to bits and reassembled, reanimated, and turned loose among the unsuspecting villagers. 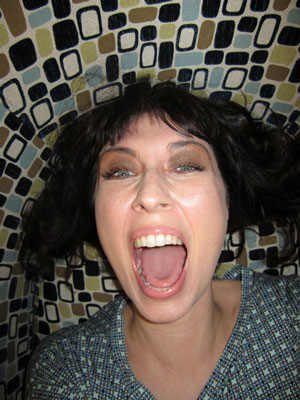 Whether physical or allegorical, the world of Bombyonder, Livingston’s first novel, is much like this one—maybe it is this one—a world of constant and ever more complicated war, a state the father of our unnamed narrator/protagonist seeks to exploit to establish his “legacy.” His desire for immortality leads him to create the “kind bomb,” a pill which undoes, scrambles, and recreates the memory of whoever might swallow it. The weapon’s first victim? Our heroine, convinced by her father to to swallow the pill just before she slits his throat, twinned actions which set the madness in motion. Livingston depicts the state of unreality this weapon would surely cause in horrifying and devastatingly funny ways. As the weapon does its work, neither the character nor the reader can know what is real, what is fabricated, or what is made from cobbled together bits of the daughter’s own subconscious. All she knows is that she must venture into the crater—actual? Subconscious? Who knows—left behind by the bomb, following clues that might lead her back to herself.

She does not want to go alone, but very bad things come to those she enlists to help her. She needs a prince, but princes are undesirable or in short supply. Then, in one of the book’s many delicious ironies the bomb seems to offer up a solution:

But I was in no mood to marry. I needed connection to a prince who wouldn’t try to fuck me.

I needed a brother.

Rauan looked just like me except his hair was the texture of a dog’s and the shade of a cat’s. His eyes shined like fruit plucked from a wolf’s jaw. His jaw squared and slacked while his breath wafted like Father’s, if Father had worked in a coal mine. Rauan’s overall aroma was closer to Mother’s, but mushier and dragon-doused, like he was older by centuries. We were practically twins.

Nobody remembered him. Nobody wanted him. Except me.

A helpful bit of advice to the reader: try to treat this difficult book as one would a poem. Let it wash over you, submerge you in its bizarre and dangerous charms, and carry you away. Sit back, hang on tight and gape at this safari of Ums and assbeasts, denim-clad golems, troops of spirit-guides and Tiresia, (Tiresiases?) seeming always, even as they lead our narrator—and us—deeper into the crater of Bombyonder, to lead back to the murdered father and his inescapable legacy. Geeks bearing gifts, indeed!

Imagine Carroll’s Mad Hatter going down his own rabbit hole, emerging in a world exponentially weirder and more dangerous than the tea party he left behind, a world of detritus and damage, of: “[A] ferret riding an elk with multiple stab wounds. A blue dog barking “white cat.” A dying fox gasping “Oh my Pompeii.” A lanky reaper-type. A cow wearing zebra print. Another lizard wearing a feather boa. A monkey selling laundry soap. A graffiti-covered snail. And on and on.

This world is exhausting and more than a bit disgusting, and in the hands of a lesser writer it would be boring, too. But Livingston, in torrents of delicious language, sends a protagonist as unsympathetic as imaginable on a journey of discovery that forces us to sympathize, empathize, and in the end, recognize ourselves in her. The beauty of Bombyonder is how it begins with a character and a setting almost completely foreign, and in the course of its madly fractured narrative brings us to a deep—and deeply disturbing—understanding of the narrator and her world. We start with a narrator who repels us, but Livingston does not let us look away. We are frog-marched into a world that horrifies us, but she does not let us escape. We find ourselves, almost against our will, cheering for our narrator to succeed. We find ourselves liking and identifying with her. Holy Hannah, we cry, the narrator is me!

We begin to understand this terrible truth when the narrator says, “Vomit it up all you can, but that awful something is already absorbed, already a part of the body, the landscape, the equation. It’s science, it’s art, it’s the truth you never attempted to learn but somehow you absorbed the concept and thank God you did otherwise you wouldn’t be able to breathe down here because this guy is burning up all the air.”

And thus, the demented, destroyed and damned (and damned funny) world that is Bombyonder begins to look very much like the world we live in every day, our own memories suddenly as untrustworthy as any revisited by our protagonist. Which brings us to the author’s final literary forebear. Bombyonder obsesses over memory every bit as much as Proust’s a la Recherché du Temps Perdu, but in a peripatetic, right-in-the-middle-of-the-damn-apocalypse kind of way, Proust’s madeleine replaced by a vomited-up dead bird, memory contemplated not in calm repose, but in frantic descent into a crater of one’s own making.

Wyoming/Colorado native Brent Terry has published poems, stories, essays and reviews in many magazines and journals. He is the author of two collections of poetry: the chapbook yesnomaybe (Main Street Rag, 2002) and the full-length Wicked, Excellently (Custom Words, 2007). Terry received an MFA from Bennington in 2001. In 2111 he was awarded a fellowship from the Connecticut Arts and Tourism Board. A former neighborhood poet laureate in Minneapolis, Terry now lives in Willimantic, CT, where he scandalizes the local deer population with the brazen skimpiness of his running attire and teaches at Eastern Connecticut State University, but still yearns to rescue a border collie and light out for the Rockies.