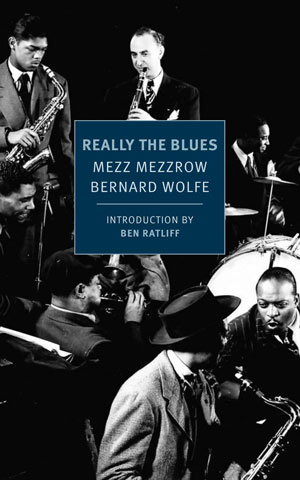 You’re in another anonymous suburb at an undistinguished hotel on a Tuesday evening, traveling for work. After a day of meetings, you’re finally free to visit the hotel bar for a burger and a beer before you do it all over again tomorrow. At the counter, you take a seat two stools away from a middle-aged man in fine trousers, a white shirt, and a wide, loud tie, drinking something brown on the rocks. The man’s exchanges are first cordial, but then stretch into tall tales that make you fidget in your seat, and finally become oddly compelling, even touching. Just as the bartender calls for your last order, the story winds to a shimmering conclusion, leaving you with an unexpected sense of hope, of the power of persistence, of the redemption of art. That’s the feel of reading Mezz Mezzrow’s classic 1946 memoir, recently republished by NYRB Classics, about his life as a jazz saxophonist.

“Music school?” the book begins. “Are you kidding? I learned to play the sax in Pontiac Reformatory”—the prison for younger offenders where Milton “Mezz” Mesirow, born in 1899, was incarcerated for stealing a car as a teenager. If Mezzrow, who co-authored his memoir with novelist Bernard Wolfe, had written the book today, it probably wouldn’t begin with a stolen Studebaker but with a sticky ball of opium instead. Just fifteen years after his joyride-gone-wrong, Mezz was hooked on the drug, so stoned that he and his friends didn’t even move when the building that housed their opium den caught fire. The 2016 version of Really the Blues might open with opium addiction and professional disappointment, flash back to a more innocent and promising youth, and then fast forward to present redemption. 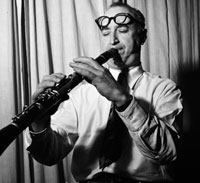 Instead, Mezzrow gives us his story chronologically. This structure requires faith from its audience; for the first half of the book, I wasn’t convinced that it was more than an assortment of possibly apocryphal anecdotes. Take that stolen Studebaker. Mezz, a Jewish kid from Chicago’s South Side, nearly talks his way out of the police station by claiming the car is borrowed from his father; when the sergeant at the station asks him for his dad’s address to corroborate his story, Mezz surreptitiously reads it off the police blotter, and the cop buys the fib. Mezz is almost out the door of the station when by chance he runs into a lieutenant who knows his real name, and it’s the Reformatory after all.

On a second trip to prison, Mezz is the perfect trickster, sweet-talking a porter into stealing the sputum of a TB patient so Mezz himself can pretend to cough it up and get transferred from the chain gang to the hospital. After prison, as a young sax player, Mezz plays in brothels and speakeasies owned by Al Capone or his associates, and Capone’s mistress, Marcelle, develops a crush on him, even hunting him down in a yellow cab when he tries to avoid her. Another time, when Capone tells Mezz to fire a singer in a band because Capone’s brother is too distracted by her charms, Mezz unloads on the famous gangster and bootlegger: “Why, you couldn’t even tell good whisky if you smelled it and that’s your racket, so how do you figure to tell me about music.” Luckily, he’s not iced on the spot.

After a hundred pages of these unlikely escapades and brushes with American icons, I stopped questioning them. It seemed most likely that Mezzrow really did rush to Paris for a gig only to realize that he’d forgot to tell the guy who hired him that he was on his way, and that his connection had already gone back to New York. Certainly he met Bessie Smith, and even if Gene Krupa’s drum technique didn’t owe as much to Mezzrow as Mezz claimed, he did tutor a teenage Krupa, introducing him to his favorite jazz records. Mezz really did supply Louis Armstrong—and many other jazz greats—with the sweetest of Mexican weed, to the point where “Mezz” became a synonym for pot. After all, it’s documented in the lyrics of a Fats Waller’s song, “If You’re a Viper,”: “Dreamed about a reefer five feet long/A mighty Mezz, but not too strong.” (Waller shows up in the memoir, too.)

What carried me through my doubts about whether the book would do more than name-drop was the jazzy, riffing quality of the book’s prose. Almost every sentence drips with similes. In jail on suspicion of stealing some silk shirts—a crime he didn’t commit—Mezzrow witnesses the hanging of a man named Smiling Jack O’Brien, who goes to his death singing. Mezz writes that whenever he hears the song now, he can’t help but think of O’Brien and “the sound of that trap door cracking open, and of the way his legs looked as he hung there, kind of squirming and snaking around at first, then quiet all of a sudden, with his shoes swinging easy in space like a couple of tired crows.”

For Mezz, “written music is like handcuffs,” two players working on a duet “fit together like pie and ice cream,” listening to Bix Beiderbecke compose on piano is like “skidding on a giant billiard-ball across a green felt vacuum with no side-pockets,” and Bessie Smith’s “vitality flowed out like a cloud and stuffed the air till the walls bulged.” On top of the imagery, there’s the argot: Mezzrow is so proficient in the colorful slang of his era that the book comes with a nine-page, fine-print glossary, including everything from ace (first rate) to zooty (fashionable). At one point, the book actually reproduces a whole conversation—four pages long—of the most intense jive-talk imaginable, and includes a translation in an appendix.

Also worthwhile were Mezz’s observations of the intricacies of race in the first half of the 20th century. Mezz himself has an unusual relationship to race for his time. A white musician who loves New Orleans jazz, he at least once even pretends to be black, so that he can live on a cellblock with black inmates instead of white. Mezz sometimes indulges in romanticizing African-Americans to the point of discomfort for a modern reader—witness his rhapsodic praise of “the Negro’s real artistry with his prose, and the clean way he looks at sex.” And yet at the same time, Mezz lives a remarkably integrated life in the late 1920s and the 1930s: he spends his time in Harlem, organizes mixed-race all-star jazz performances, and eventually marries a black woman. Mezzrow is at times tiresome in his insistence on the importance of “real” jazz when many musicians around him—including black musicians—were innovating away from the New Orleans style. But Mezz’s insistence on what he perceives as authenticity stems from a loyalty to “the blues, the vibrant source of all our jazz,” in great part because it emerged as uniquely black music.

As the book’s smart introduction by jazz critic Ben Ratliff explains, the best that jazz critics have said about Mezz’s playing, as opposed to his story-telling, is that he was “inconsistent but sometimes very decent,” in the faint praise of Allen Lowe. So the reason to read this book is not as insight into the author’s musicianship, but insight into the musicians he knows. More so: it’s to understand the impact of an art form on a life, to see how music gives meaning to its practitioners and listeners.

By the time I got to the end of the book, I was genuinely moved by Mezz’s devotion to his chosen form of music. With the help of his wife, Mezz kicks his opium habit, despite the severe effects of withdrawal. Then comes the harder part—he has to put his life back together again. As he puts it, “After I opened my eyes, blinked a few times, and paddled frantically back across the River Styx, it took me five years and more to convince the world I was alive and kicking again.” It doesn’t help that shortly after he kicks opium, Mezz gets thrown into prison yet again, this time for almost two years, for dealing marijuana. There, playing once again in a prison band, he gets into a groove, playing music that’s real and authentic and that somehow lets him make sense of everything that’s gone before in his life. He writes: “Those twenty years of striving and failing had all gone down into my fingertips, so that now, all of a sudden, I could tickle the clarinet keys and squeeze out the only language in the whole wide world that would let me speak my piece.  And you know what my piece was? A very simple story: Life is good, it’s great to be alive!”