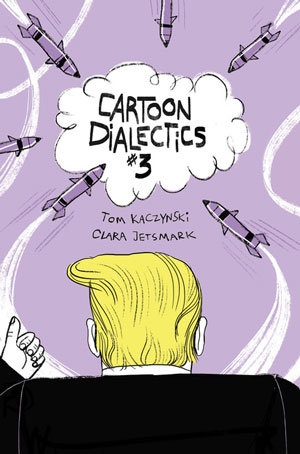 The Cartoon Dialectics series collects work that Tom Kaczynski has published in anthologies since 2005. Kaczynski is perhaps best known for being the publisher of comics imprint Uncivilized Books, an independent press that has published works by Gabrielle Bell, David B., and Noah Van Sciver. As the title Cartoon Dialectics suggests, Kaczynski’s own work straddles the line between comics and philosophy; he weaves together reflections on culture and critical theory with memoir and memory. Succinct and meditative, the short works address themes which continue to be relevant almost fifteen years after they were first written.

The three volumes include works first published in different sources, and drawn in a variety of styles, with a proclivity towards thick ink lines, monochrome, and realism. Cartoon Dialectics includes a number of Easter Eggs for the philosophy-obsessed, as he casually refers to Guy Debord, Slavoj Žižek, Fredric Jameson, and Svetlana Boym. Critical theory is the backbone to Cartoon Dialectics but its inclusion does not keep the work from being approachable; nor is the political import sacrificed in favor of a more palatable message. Cartoon Dialectics toes the line between heady theoretical ideas and commonplace, everyday speech with grace and poise. 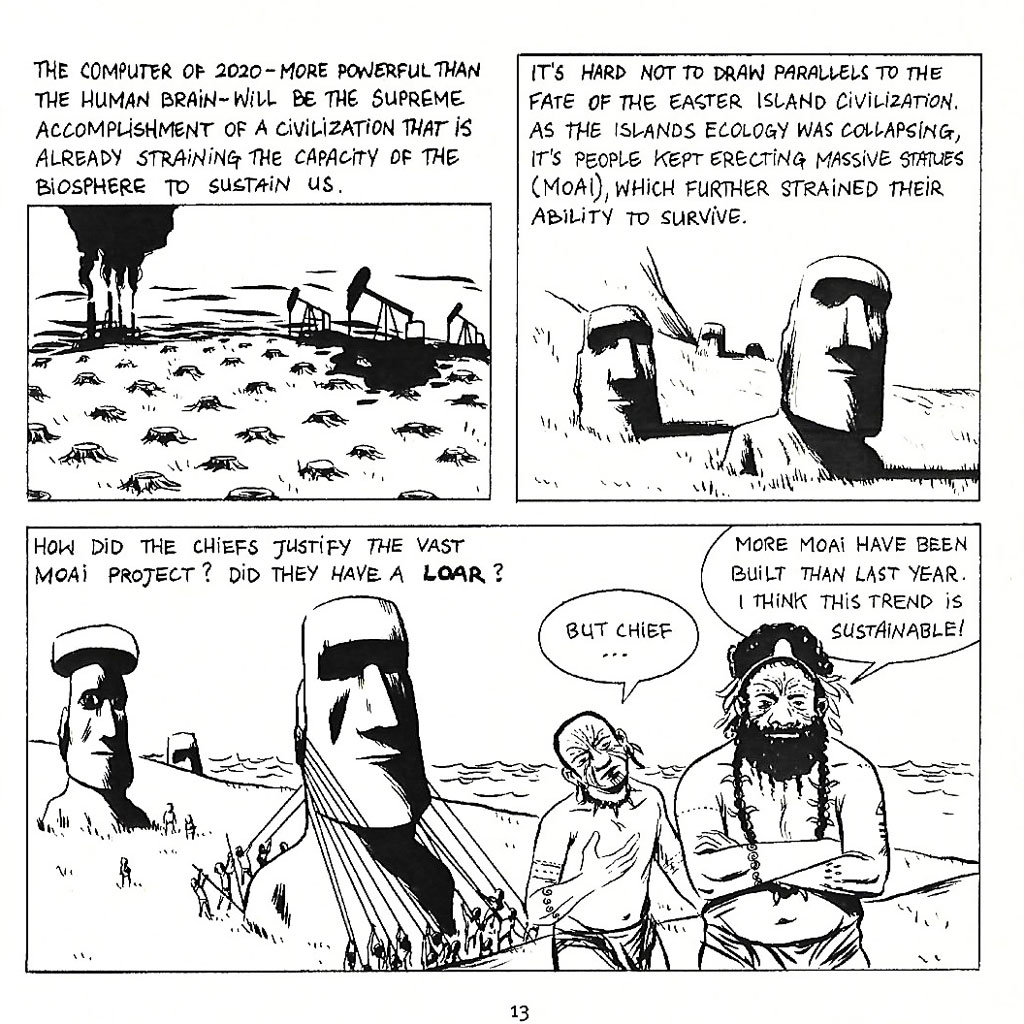 A frequent character in these volumes is “Ransom Strange,” an “immaterialist psychonaut” who travels into the minds of others. In Volume 1, he cures a man suffering from a “conspicuous consumption curse” with obsolete technology: a five-year-old cell phone. In Volume 2, as he introduces himself (thus breaking the fourth wall), he promises to the reader: “I can only guarantee one thing / You’ll never see the world in the same way again!” In this way, he becomes a guide who leads the reader to critically examine her world. 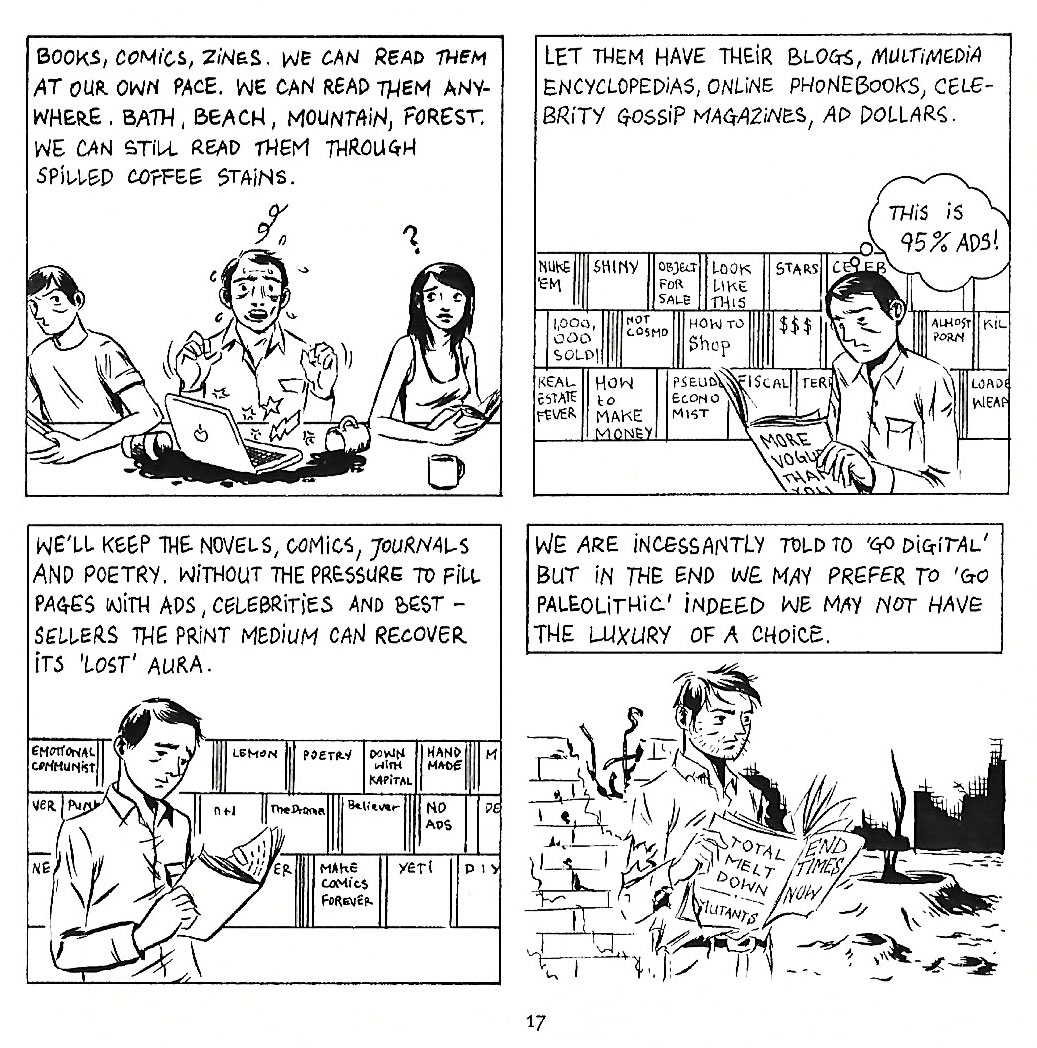 In the volumes, Kaczynski frequently returns to a critique of modern life. In the tradition of theorists such as aesthetic philosopher Walter Benjamin and cultural theorist Jean Baudrillard, Kaczynski considers both the wonders of modernity and the despair of late capitalism. Subjects in Cartoon Dialectics are frequently isolated from others, trapped in a metaphorical (or literal) dystopia. It takes a glitch in the system—an ecological catastrophe, a blackout—for them to find meaning. 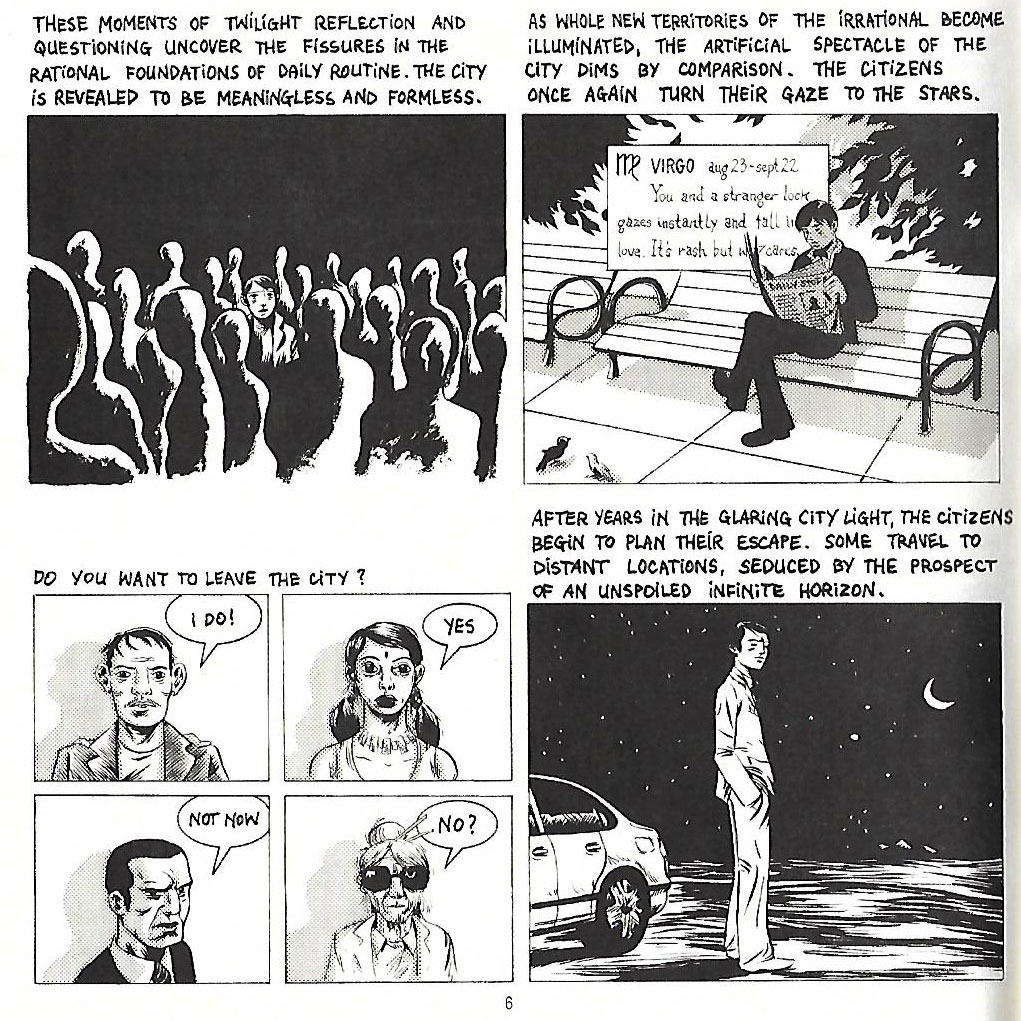 Frequently, this meaning is found in an escape from the alienation characteristic of life lived in large cities. Volume 2 begins with a parable in which citizens of a city can only find connection during a blackout. Suddenly the title of his publishing imprint, Uncivilized Books, begins to make a great deal of sense: Kaczynski’s comics, and philosophy, reflect a yearning for a return to pre-civilization, or perhaps pre-modernity—a world of open fields, darkness, fireflies, and stars.

Volume 2 includes an insert from a comic Kaczynski drew at age twenty-three—ten years before the volume’s publication date. In this stream-of-consciousness memoir, which he claims “contain[s] all the elements of my future (now) comics,” he remembers blackouts in his native communist Poland with a wistful nostalgia. This short segment, drawn sketchily by pen, and in styles both cartoonish and hyper-realistic, describes how he would draw by candlelight during blackouts. Upon immigration to the U.S., he became an “electric kid,” for whom television was a drug. It was only when he finally snapped out of his obsession with screens that he noticed things he had never seen before. For Kaczynski, a return to drawing, darkness, and candlelight also becomes a return to mystery and creativity. To be “uncivilized” is, oxymoronically, a way to return to the creative and artistic roots of human civilization.

Similarly, in Volume 1, a comic called “World 2.0” presents an ironic critique of technological futurists such as Jeff Jarvis, Marvin Minsky, and Ray Kurzweil. They are presented as proponents of the death of print, the posthuman “digeratti.” Almost ironically, Kurzweil—father of (print) cartoonist Amy Kurzweil, of Flying Couch: A Graphic Memoir (Black Balloon, 2016)—is mentioned in several instances throughout the volumes. Yet the tone of Cartoon Dialectics is unapologetically anti-capitalist. Technological innovation is equated to the Moai of Easter Island: massive statues built during a period of extreme ecological decline.

The solution, again, is a return to what Kaczynski, riffing on cyberpunk, deems “meatspace”—“ancient, slow, awkward, ugly, beautiful, sublime, human.” The solution is also a return to print—to books, comics, and zines which afford the reader freedom to read it where she may, even through spilled coffee stains. Print is resilient, as Kaczynski notes in the comic “The Unbearable Lightness of Digital”: “once a book enters the world, it is surprisingly difficult to destroy.” By contrast, an e-book loaded onto a tablet will only work when its battery is charged. What, then, will happen when power supplies run out? Tablets do not work without power, but any work of print can be read by candlelight, regardless of our ever-dwindling power supply.

There is an eschatological strain to Kaczynski’s work; the apocalypse is frequently referenced. In Cartoon Dialectics (and, one can argue, in our own extra-diegetic world), we are living through the apocalypse. As Random Strange notes in Volume 2: “It’s here. Now. Welcome to the end of the world.”

Indeed, in Volume 3 the age of Trump looms overhead (literally, as the back of Trump’s head is on one of the volume’s covers). This volume returns to a theme woven throughout Kaczynski’s work: nostalgia. Kaczynski uses concepts from Svetlana Boym’s The Future of Nostalgia (Basic Books, 2002) to explain both the horrifying return of nationalism and the far more benign addiction to all things retro, from vinyl to vintage clothing. Boym presents two types of nostalgia: restorative nostalgia, which seeks to “make __ great again” with a return to the past, and reflective nostalgia, which, while longing for something lost, still understands the impossibility of its return. The former is at the root of fascistic terror, while the latter can be inspiration for poetry, art, and music. As Kaczynski shows, it can inspire comics as well. The past cannot return, the present cannot be “great again,” but, with a critical mindset and a healthy dash of reflective nostalgia, it can help soothe the alienation of our increasingly alienated lives. 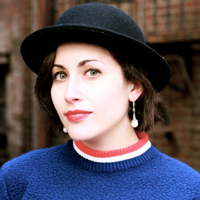 Julia Alekseyeva is a postdoctoral fellow at the Reischauer Institute at Harvard. She researches global media (including film, television, and comics) and radical leftwing activism. She is also an author-illustrator whose debut graphic novel Soviet Daughter: A Graphic Revolution (Microcosm, 2017) recently won the VLA Diversity Award.