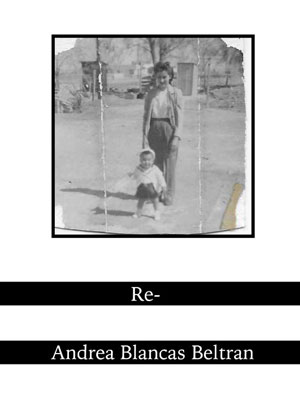 Andrea Blancas Beltran, associate editor of MIEL, experimental poet, and proud fronteriza, made her chapbook debut in July 2018 with the poetry collection Re-. In it, Beltran stitches together a brimming handful of nostalgic recollections, inviting the reader to ponder the role of memory, the eerie beauty of forgotten things, and depth of emotion that can be found in everyday life. One of the most refreshing aspects of her writing is her ability to seamlessly blend English and Spanish, creating new sonic rhythms and shades of meaning and exposing the nuanced linguistic element of Mexican-American border culture. But one would be remiss to view Re- as a story about life on the border. Beltran’s work delves into the mystery of the human mind, exploring the past not as history but as memory, vivid and malleable rather than fixed and nebulous. Though Re- wrestles with topics that challenge even the greatest thinkers, every line of this collection defies the notion of the inscrutable.

Beltran’s artistic leanings shine in this work. She reveals a compelling density of feeling through powerful images, both verbal and visual, along with precise, measured diction and thoughtful economy of white space. Beltran also surprises us with a mixed media approach, incorporating pencil drawings, clippings, and photocopies as reminders of the strange magic of mundanity and happenstance. This short collection is brutally honest, confrontational, and in many ways devastating. With her acute attention to detail, Beltran forces us to evaluate our own discomfort around death and decay and urges us into the place between sorrow and longing. 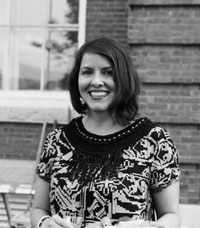 The chapbook is divided into four sections, bookended by a prologue and epilogue and held together with an interlude. The freedom and variety of her style—almost playful, even as she handles subjects like dementia and death—allow us to process the world through new lenses. The prologue (“Geography”) declares the theme of the work as a whole—“a continent / named Nostalgia.” Following this, the first section (“Why Grandma won’t play jacks with me in the backyard”) deals with the necessity of confronting the realities of life, and potentially a loss of childhood in the face of those realities. “There’s no such thing / as even / playing ground,” says the speaker. “We need to learn / to anticipate an unexpected direction / in the rebound.” Already, the speaker looks forward to the sense of wandering and seeking new direction that she explores further in the last sections of the chapbook.

Section two is a series of poems about the loss of memory and attempts to retain it, including a photocopied image of a scribbled list of reminders on the back of an envelope. The form in this section begins to decay, mimicking the advance of both dementia and death. In the interlude (“July 31, 2015”), Beltran presents us with a drawing of a sunflower paired with a clipping from a dictionary—“earth’ly”—framing a penciled reflection on death, mourning, and our attachment to the earth. The graphite sunflower is ironically depressing, looking defeated in its lack of color; next to it are scrawled the words, “twenty days after the sun / flower has died, seeds appear / at its center.” The dictionary clipping at the bottom right calls into question the ways we define our own earthly existence, and that of all earthly things, while the speaker’s saying that it blew into her yard seems to question our idea of happenstance. But Beltran answers these questions with one short, bright declaration. The poem tucked into the bottom left corner of the page suggests rebirth and renewal, defying the very decay that is the main theme of this collection. Printed in green ink, the poem reads, “grandma / wore green / today, her first / color other than / black in nine months.” Alongside the faint, ghostlike pencil scratches, this understated yet triumphant sentence springs to life, singing of redemption after tragedy. In such a simple thing as color, Beltran opens a wellspring of hope.

The third section is composed of three poems reflecting on the speaker’s memories of her father and grandparents. Each of these three poems takes up little space on the page—they shrink away on the page, preparing us for section four, which returns to the theme of decaying memory and death. In contrast with section three, section four’s poems are longer and denser; they are more confrontational and less questioning; they don’t just notice details, but long for the restoration of them. These last few sections of the collection bring full circle the themes of uncertainty and redirection that were introduced from the beginning. The idea of nostalgia as a location and the grief of searching for home are spun in a new direction as the speaker begins to find freedom in wandering, “everywhere as home” (“Last Wish”). Lostness and death become release from and mastery over the quandaries of life. In contrast to the circumscription of Nostalgia on the map in “Geography,” the uncharted territories become kingdoms: “To be mistress of salt, soon to be mascot of wind with no map to obey. To break with her roots, once & for all—a tumbleweed now free to head out alone” (“Last Wish”). Finally, the epilogue (“Navigation”) offers hope in the face of death, clinging still to the past yet embracing the possibilities of the future—“who we were & are becoming.”

With a unique elegance, Beltran’s experimental style lends itself to her subject, as the form of her poems mimics the bizarre workings of the mind—variously scattered, rushed, dark, conversational, and questioning. In several of her poems (“Geography,” “Why Grandma won’t play jacks with me in the backyard,” “Perseveration”), her careful placement of words on the page invites the reader to pause in the space between words, between thoughts. There is an airy, almost ghostly feeling about the balance of ink and white space, evoking a sense of emptiness, of yearning, and ultimately of the nostalgia that Beltran so eloquently expresses here and throughout her work.

Beltran’s most compact poem, “tomatoes you picked,” asks one question: “what’s fruit / without this decay?” In the context of the chapbook as a whole, this potent image of rotting tomatoes is a poignant reminder of the decay of the mind and memory, even of life itself. The poem’s density—three tight lines, twelve words in all, on an otherwise blank page—exposes the mind’s often morbid habit of fixating on one thought, one all-important question. The increasing preoccupation with decay here in the first poem of section three also looks forward to “Re-,” the first poem of section four. The title poem opens with the point-blank statement, “Every day is just another day distant from & toward another death. This is the irreconcilable that we try to reconcile.” The repetition throughout this poem not only points to the decay of the mind, but also serves as a reminder that to some degree, the mind’s tendency to cycle through such patterns is that which signals its brokenness. For Beltran, repetition is at once the assurance of memory and the harbinger of dementia; and for us, perhaps, it can be the key to understanding our own minds. 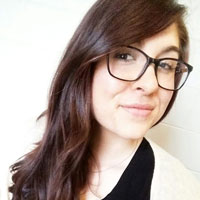 Hope Fischbach is an emerging writer and poet who studies English and Spanish at Lee University. Her interview with Andrea Blancas Beltran is published on Speaking of Marvels, and her poetry and flash fiction are forthcoming in the 2019 edition of Lee Review. When she’s not writing, you can find her blissfully overspending at used book shops, scouring online art galleries, or wandering in the mountains. A South Carolina native, she currently resides in Knoxville, Tennessee.