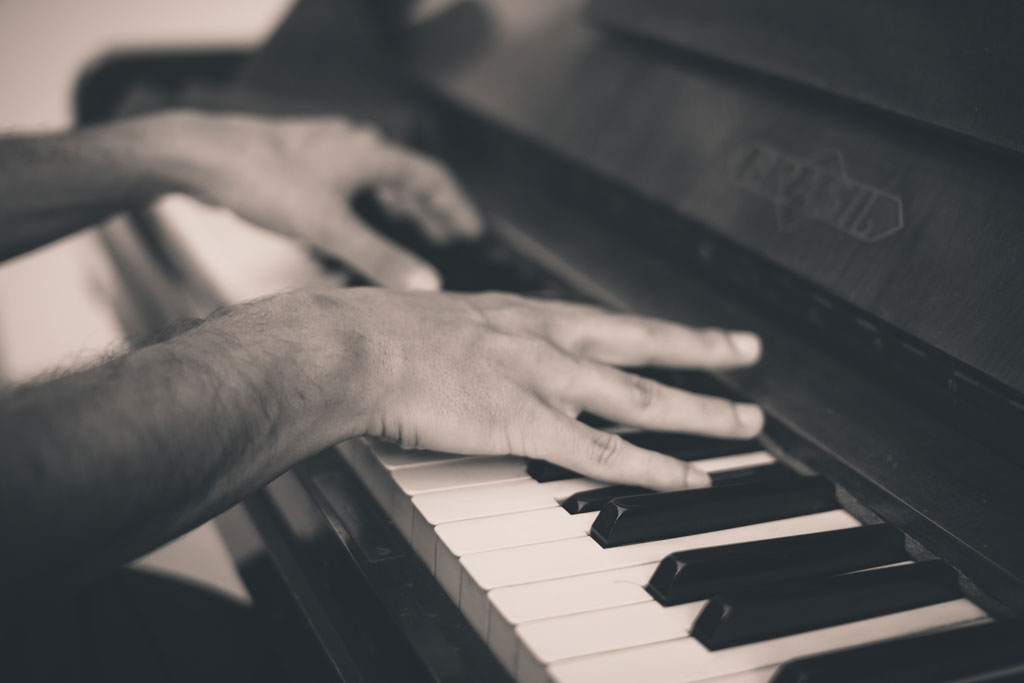 It’s moonlit and muggy out as Peety Alfaro walks to work. Under the yellow streetlights, he pauses to wipe the condensation off his glasses. Once done, he affixes his large and thick lenses back onto his face and takes a deep breath. Exhaling, he tugs rapidly at his white tee to cool off. Then he nods hard and continues walking, shoulders back and head up.

A homeless man, slouched on a nearby park bench to his left, calls out to him in Spanish. Peety keeps steady and walks on by. In the bushes on either side of him, he can hear the scattering of rats. One scurries across the illuminated sidewalk in front of him. Peety maintains. As he makes his way down the numbers, he whistles “Take the A Train.”

From his puckered lips come the notes of Billy Strayhorn and Duke Ellington. For Peety, this is his tune too, but, more importantly, it is the tune of the Voice of America Jazz Hour. Before he left Perú, Peety would wake up at odd hours, clutching his radio, to listen to the Voice of America Jazz Hour with Willis Conover. The jazz waves and slow-spoken English filled the small one-bedroom home that he and his mother lived in. The low lights of dying embers in the corner and the fresh smell of dirt floors mixed with the smell of potato soup.

Peety’s excitement is especially for tonight though, for this is a rare Saturday, in which Duke Ellington is here. No doubt, Ellington is already here—two extra guards and his black limousine are already outside the building.

Peety enters the grey and granite building, displaying his ID card, looking for more traces of Ellington. As he walks across the tiled floor, his boots squeak. He shows his ID once more and goes toward the locker room to put on his work clothes—blue jeans and a dark blue button-down. He affixes his nametag to his work shirt in the stuffy room and then heads to the storage closet for cleaning supplies and his radio.

From the far west side of the building, he can hear the low vibrations of “Take the A Train.” The show is just beginning. He flicks on his Sanyo transistor radio and dials it in. The accumulated vibrations bring an onrush of memories: simmering potato stew, dirt floors, kicked up dust, Peety’s mother by a crackling fire, and the sensation of radio waves close to his chest; then, the onrush slips into his first days in America.

He had been sitting upright on a mattress on the floor as he flicked on his radio to only fuzz. He watched his four other roommates, lying asleep on their mattresses, trying not to wake them. Peety stayed up all night listening to the fuzz, subtly shifting the dial. It wasn’t until four more nights of failed attempts that Peety learned: “by order of the Smith-Mundt Act of nineteen forty-eight, information produced by the Voice of America for audiences outside the United States shall not be disseminated within the United States.”

It is only now, close to the original transmitter, on Saturday nights, with his short wave radio, that Peety can catch the show.

Suited up and equipped, Peety hits the second floor. He begins by cleaning the bathrooms, then moves on to the staff break room, works on the offices and, lastly, cleans the recording studios. He always leaves the studio with the upright piano for last. This studio is small, with worn, carpet-like walls. Inside is a mixer, two standing microphones, and the piano.

Peety looks both ways down the hall and then opens the door to this studio. In a hurry, he brings his custodian cart into the room and eases the door to a soft close. He keeps the lights off and finds the piano bench in the dark. He sits down and lays his fingers lightly on the keys as he’s done countless times before. From a small column-shaped window in the door, the fluorescent hallway light seeps in. He breathes in, reverent, knowing the scarcity of this space. Peety breathes out and begins to play “All Blues” by Miles Davis.

His fingers play a soft tremolo that slowly builds into the image of his mother. It’s her large hands that he accentuates first—their cracked and dry palms, varicose veins, and the brown dirt under her nails. Next are her tan and muddied, calf-high work boots, then her long skirt that ends just at the boots and her long-sleeved white blouse. Finally, with grace notes, he outlines the small black derby hat she wore to work. The slow sonorous melody begins as the dust slowly churns, kicked up from the dirt floors around her. As Peety moves his hand to arpeggiate the chord, his mother begins rummaging swiftly, like a ghost, around a small bedroom. The bedroom has two twin-size beds in it covered in thin white sheets. The notes sound off in a flurry, and his mother begins to pile belongings into a small blue suitcase on the bed: clothes, a blanket, a bowl, and a radio. Incoming, a large smash of a chord from his left hand and a few right hand notes sound off until another ringing chord lands. Peety twists his face into a tight smile and rushes into the piano solo. The flurry of improvised notes seems before him and just out of reach, crashing along, causing a tender wreckage. Pulling his head back, the melody begins again. Calmer and out of breath, Peety brings the song back to its soft beginning.

Peety checks the time on his wristwatch and leaves the piano in a hurry, grabbing his cart. He takes the elevator to the third floor and begins the routine again: bathrooms, break room, offices, and studios. As he walks by the hallways on the third floor, heading toward the next office to clean, he turns the radio volume down, and then off. Through the old walls of the studio, he can hear the show leaking into the hallway. He stalls, brimming with nerves and pride, crouched over, sweeping the floor. He recognizes the familiar voice of Conover—clear, deep, slow, and warm. Peety patiently follows the voice to a studio door. His broom scratches the tile just outside the door. Closer now, he can even hear the laughter of another voice—Duke Ellington—on the other side. The jazz tune begins winding down, hitting home one last time before it finally runs to the end of the vinyl grooves. The voices quiet down, and Conover speaks into the microphone, closing out the show. Ellington says, “Good night,” and the show ends with the theme song, “Take the A Train,” once more.

Peety looks at the door, then at his watch, before finally returning his focus to his job. He turns around, heading to the next office.

Once Peety is done cleaning, he returns to that upright piano. Same as before, the soft tremolo of “All Blues” begins again—this time a little more forcefully. The image of his mother comes out from the piano. This time the lines on her face are deeper, her skirt is frayed, and her sleeves are rolled up. The melody kicks in, and the smell of the dirt and dust return to him in another rush. He plays double notes this time before moving into an arpeggio, and his mother coughs twice into a handkerchief before packing his bag. Now comes the chord, softer this time, and Peety begins improvising the solo. This time it’s slow and muted—it’s the wind chimes out in front of his old house, or the distant bell of the schoolhouse getting out, or the light from an open window illuminating the shifting dust. The melody kicks back in one last time, and Peety keeps it steady.

Chk, chk, the doorknob rattles. Then the door swings open. “Hey you, what are you doing in here? You guys should’ve been done in here a while ago.” A man is outlined in the doorway, leaving his front in shadow. The man wears glasses, a khaki button-down, and a badge.

Peety doesn’t speak. His mouth opens, but only the sound of parting lips comes.

Peety’s eyes are wide, his fingers heavy on the white keys, his foot still pressing the pedal.

The guard exhales heavily. “Oh, forget it, I’m closing up. You best get a move on, and I’m serious this time, okay, don’t let me catch you in here again.” He turns around, leaving the light off, his shoes smacking down the hall. The door shuts loudly behind him.

Peety gets up, pushing the bench behind him in a squeak. He flicks on the light, grabs his cart, and opens the door onto the hallway, heading back to the storage closet and locker rooms.

Outside, it’s raining lightly. A ways away, under the yellow streetlights, under an umbrella, walking away from him, Peety sees two men. One is a white man in a crisp suit, loafers, and slicked back hair, opening the door to a black limousine. Stepping into the limousine is a black man in a light-colored suit, derby shoes, and a wide-brimmed hat. The white man follows him in, laughing a faint but familiar laugh. He closes the door behind him, and the two men become lost behind the tinted glass. The limousine rolls away from the curb, fading out of sight. Peety heads in the same direction, on his way home. 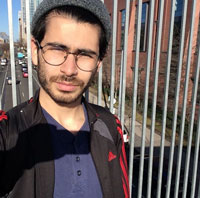 David Satten-López is a student of New Historicism and Gorgias; he likes cooking and taking walks on the beach. He hates Enlightenment humanism; he loves cats. His favorite writers are Baldwin, Cervantes, Carver, and Cisneros; Césaire, Wynter, Hartman, and Moten; M. NourbeSe Philip, Springsteen, Brandy, and Badu. A formative moment for his writing was listening to Max Roach and Abbey Lincoln’s “Triptych.” Follow him on Twitter @pocospeed.