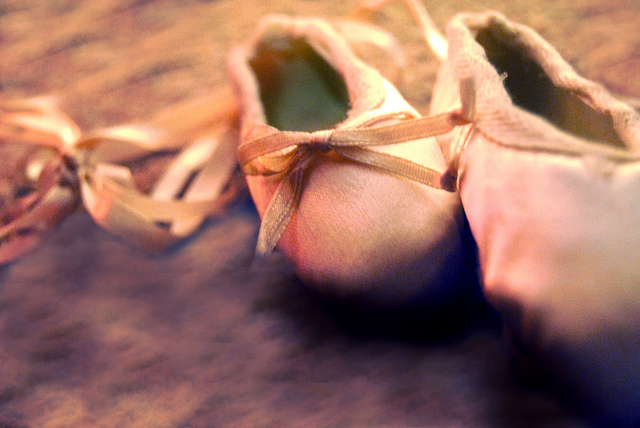 OUT OF THE BLUE
by Renée K. Nicholson

Shorthand we just called it “Bluebird,” but technically the role was Princess Florina. Hers is the tale of a maiden who wanted to learn to fly, and about the prince, disguised as the blue bird who taught her. For the celebration of Aurora’s wedding in the third act of Sleeping Beauty, the Bluebird story, compressed, became entertainment for both onstage wedding guests and audience members. Bluebird was a common choice to teach young dancers advanced enough learn some repertoire. Reminded of many famous dancers who made their soloist debuts as Princess Florina, when given the role in a showcase, I thought of it as a sign of things to come.

My costume, royal blue with feathers on the platter tutu as well as a feathered headpiece, did make me feel a bit like a delicate bird. Wanting to stroke the feathers with my fingers, I learned restraint by not mussing my costume, resisting the urge to pet and caress. In a platter tutu, I felt like a real dancer. Platter tutus signified a rite of passage, at least for me, and still, when I see young dancers in platter tutus, I feel a little nostalgia for my royal blue beginnings. As a very young girl I’d had a Barbie doll that came in a platter tutu and with crown permanently attached to her head, which I adored until I realized Barbie dolls are made so that they have no turnout, and ballet is based on turning out by rotating from the hips. Barbie’s leg only swung back to front. Barbie could never have been a dancer, not for real, but in my tutu, I thought perhaps I was a dancer.

The bodice of my costume had a long series of hooks, and when one of the backstage dressers helped clasp them, it made me think of what it must have been like to wear a corset. Made with stiff boning, the bodice restricted my middle, binding me in and making it hard to breathe. And yet I liked that about it, believing because it was unforgiving it made my dancing somehow better, pain and beauty intertwined into a mythically-enhanced concoction.

Costuming aside, Florina challenged me in other ways. Although I excelled at petit allegro in my technique classes, which was needed for the part, Princess Florina was not the kind of role I’d expected to get. Lighthearted, a quality I would not use to describe either my technique or my personality, the motivation behind the steps was that of flight, learning to fly. Florina, the little flora, a tiny and fresh and lovely princess. In my naive early days of performing, I felt challenged to be the role I was given—weather a mouse or a party girl in The Nutcracker, or simply a part of the Waltz of the Hours, I didn’t just want to dance my roles. I want to become them. Because I didn’t see myself as a Princess Florina, I found it tough to be her. My other early roles were icy, winter-infused parts, Snowflake and Winter Fairy, and I cultivated the persona. Florina challenged my very sense of self, and I struggled.

Choreography can be a map, and the steps in the Florina variation helped me—as if tripping forward in bourrées and flittering échappés, light and nearly flickering piqué fouetté, the bourrées again. What message could I find hidden in the architecture of the steps themselves? What you do became who you were to become. For me, a princess, regal, mimicking a bird, airy with flight. The steps aimed to reconcile the two in my body, if it was up to the task.

The full tale of Florina, not entirely depicted as part of the celebration of Aurora’s wedding, goes something like this. A king has a daughter in a first marriage—Florina—who, during her father’s second marriage gets locked in a tower by her stepmother, who had an ugly daughter she wanted married off. Fearing Florina would capture the hearts of suitors, off went Florina, standard fare for this kind of story. Pretty girls are always getting locked up for the mere offense of being attractive. A prince, enamored with Florina and disguised as Bluebird, comes to her window in her tower prison. Of course, Florina can’t tell he’s a prince.

Can we ever tell who are the princes?

The Bluebird visits Florina in captivity, bringing her presents, and she, growing fond of him, caresses his wings and feathers. The queen, Florina’s stepmother, finds out about the Bluebird visits, and closes the window to Florina’s chamber, keeping Bluebird out, but Florina sings out for him.

In the Sleeping Beauty version, the choreography imitates Florina’s call to Bluebird. The ending pose of the variation, on one knee, hand behind the ear, the dancer poses indicating the call and response. The trick was making it look effortless, piqué arabesque, and then the gentle kneel, soft swish of arms to the listening pose. Delicate, I struggled with the pose in rehearsal. My arms beckoned, “Get here, bird,” instead of the gentle “Where are you? Please come to me.”

My coach, a former soloist with the Hamburg Ballet, kept correcting me with an incantation of “Soft, soft, soft. Don’t plunk down.”

In order to free Florina, Bluebird teaches her to fly, so they can travel aloft, destined for those places where fairy tale characters live happily ever after. To say I thought about this learning the pas de deux, the variation, or the coda for Florina would be a lie. But the effect was there, embedded in the steps. What I didn’t know or understand was sometimes gifted to me in the dance itself.

The coda, the flight: my partner danced, arms replicating flight, and I entered in the upstage corner as he rotated through multiple pirouettes. Light piqué turns from the corner, single, double, single double. Chaînés in canon, first him, then me, graceful instruction. It wasn’t unlike actual birds, which alight on a perch, hop or take flight, only to perch again. Each step chosen interpreted the weightless, skittering movements of actual birds, but with the elegance intrinsic to ballet. Harder to accomplish, too, since they also were bound and confined by the demands of ballet technique. Still only a teenager and apprentice dancer, performing pieces from the ballets felt complicated in a way I couldn’t quite explain at the time. The birds did what they did naturally; for me, Florina’s movements contained within a joie de vivre I found alien. Who trapped in a tower would be so happy? Could the idea of flight insight such sense of joy? Still, I took on Florina for what it was, and loved the role simply because it was difficult.

Later, I would understand the obstacles of Princess Florina in a different way. Lightheartedness seemed so elusive, and even now, I’m not sure exactly. To be lighthearted means to cast away cares and worries, and I have never been and still do not shed these easily.

In my royal and feathered tutu, the light around me took on a bluish tinge, and I became something other than myself. It’s the release that created the performance high. Unlike any other feeling I have known, it was as if for that moment I slipped underneath someone else’s skin. There, I could be fresh and lovely, the likeness of Florina.

Words will never capture performance adequately. Of the sensations I most remember there was the heat of the stage’s lights on my skin, compared to the cool dampness of the backstage. Also, the look and feel of my costumes, which have always stayed more vivid in my memories and imagination than any pirouette or jump or extension of my leg. What I did was gone the moment I did it. Performing disappears as it happens, a vapor, a curl of smoke, a waking dream. And even if I emerged out of this blue-hazed memory more like Florina trapped in her tower than Florina in flight, I had ahead of me the task of trying to commit memory to words, a fairy tale itself, daring to dream again of my own past. 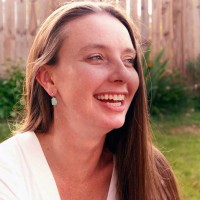 Renée K. Nicholson lives in Morgantown, WV, splitting her artistic pursuits between writing and dance. She is an American Ballet Theatre certified teacher and earned her MFA in Creative Writing at West Virginia University. Her writing has appeared in Poets & Writers, The Superstition Review, The Gettysburg Review, and elsewhere. Renée was the 2011 Emerging Writer-in-Residence at Penn State-Altoona. Her website is www.reneenicholson.com.