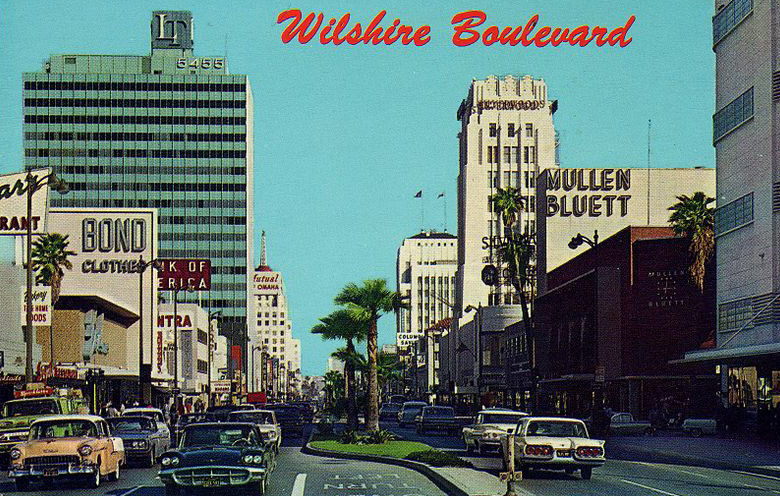 ON THE MIRACLE MILE
by Andrea Jarrell

It was lunchtime on the Miracle Mile—a stretch of Wilshire Boulevard in Los Angeles that’s not quite downtown and not quite the West Side. My mother, who always hated the hot, walked beside me in her crisp linen dress. Beneath the linen, her stockings and slip made a fft fft shifting sound, keeping time to the click of her slingback pumps. Heat waves bent the air. The streets were empty—streets that had civilized what was once ice, then tar pits, then desert. All had made way for the city of angels.

Beside my mother, I was office appropriate in a banana yellow cotton skirt and top combo. I was eleven and it was 1973, when all the clothes were Laffy Taffy colors.

From elementary school through high school, I spent my summers working with my mother, who was a secretary in a lawyer’s office. Lunchtime was the highlight of my day. On that particular day, at my request, we were headed past the office towers and the gas station on the corner to the lunch truck for gorditas. I anticipated the greasy scent of the truck and the weight of the silver-wrapped sandwich I would carry back to my mother’s office.

The lawyer she worked for was a former FBI Special Agent who had investigated the Black Dahlia murder. The Dahlia was a beautiful, dark-haired young woman famously mutilated and left in a field during the 1940s. My mother and I had watched a made-for-TV-movie about this woman, whose looseness was said to have contributed to her death. Even thirty years later, a woman on her own, divorced like my mother, risked speculation—blame for whatever unhappy ending might befall her.

“They assume you’re cheap,” my mother would say, wrinkling her nose at the word “cheap.” It was one of the worst ways she herself could judge you. Dyed hair, hoop earrings, white shoes, gum chewing, smoking on the street all marked you as loose in my mother’s eyes. Even though she was not yet thirty, she did not participate in the swinging ’70s. My mother wanted always to be above reproach—to prove that she was better than the way we sounded on paper—apartment-dwelling single mother, divorced twice, no college.

After working at the FBI, the lawyer started practicing probate law. He wrote wills for little old ladies whose pack-rat houses belied their squirreled-away wealth. One of the first jobs I ever had was to go through a small wooden file box filled with thumbed-over index cards and remove all the client cards marked DECEASED. In my mind, “Dahlia” and “deceased” mingled with a macabre thrill.

The lawyer took long vacations—five or six weeks at a stretch during which he and his wife ate their way across Europe. When he was gone my mother ran the show. The truth was, even when he was in town, his clients relied on her more than him—a source of pride and bitterness for my mother, who earned a secretary’s salary. So convinced was I that she deserved her own name on the door, I lied to friends. Though queasy with the thought that I would be found out, I always said she was a lawyer.

But from late June to September, I didn’t worry about keeping up appearances with school friends. I rarely saw them and that was fine with me. During those hot months, after our long day’s work, my mother and I had Coke floats for dinner, spooning vanilla ice cream and foam from real Coke glasses. We ate them in our nightgowns while watching old movies. We played Scrabble until two in the morning even though we knew we would be tired the next day.

During West Side Story I would dance around our apartment wearing my mother’s hand-me-down peignoir singing, “I feel pretty.” And in those moments, I believed that my freckles and red hair, which didn’t ring the “pretty” bell, would one day add up to my mother’s porcelain skin and brunette beauty.

After our late nights, we would drag ourselves into the office like hungover roommates. We’d skip breakfast. By lunchtime I was ready to eat.

On the lookout for the gorditas truck, I was squinting into the next block when I saw them. Three boys about my age, on the brink of being teenagers. They were walking backward, facing our way, saying something to a woman as she proceeded down the sidewalk. We gained on the scene but they didn’t seem to notice us. Unable to pass them, we moved along behind. Witnesses.

I couldn’t see the woman’s face but she seemed old to me. The skin on her arms loose and flabby in a faded tank top above a short floral skirt. She wore high heels but no stockings. Her hair was the color of ashes, dirty with the sun beating down on it. A zip-up sweatshirt hung over one shoulder and she scooted along in her high heels like a little girl playing dress up.

The boys were taunting her. Puckering up, they made kissing noises, jostling and knocking against each other as they laughed and played at something that would be more menacing as they got older. Their shiny black hair and skinny white t-shirts put me in mind of 1950s New York. I imagined them playing stickball and hanging out on stoops like in the old movies my mother and I watched. I wondered if these boys, who probably lived in the low, squat houses and apartments just a few blocks from the high-rise office buildings, had laughed at this woman before. I wondered if she had a name among the neighborhood kids like “the Dragon Lady” who sat at the House of Pies counter near where my mother and I lived.

The boys didn’t touch the woman but they moved in front of her, blocking her way. She tried to get around them. Once. Twice. Three times. Then I heard her low whine as it boiled to a growl. She jutted her head at them the way a goose honks violently at a predator. My mother and I were finally gaining speed, about to move past them when the woman picked up the hem of her skirt—delicately as if to curtsy.

I was right alongside her when I saw her bare bottom beneath the skirt. My mother and I kept walking but the woman’s tormentors stopped. As I passed them, I saw the look on one boy’s shocked face. Turning, I saw what he saw—the woman’s dark pubic hair beneath her lifted skirt—a grownup eyeful he had not bargained on. The woman dropped her skirt and moved on, free of them at last.

“Why did she do that?” I said in a loud whisper to my mother. Despite the intimacy of my life with my mother, I had never seen a naked woman before. I had never seen what I was becoming. With my newly forming breasts and hips, my impulse was to protect myself. Especially the part of me that made me feel vulnerable to boys and men.

“She’s not well, baby,” my mother said, eyeing me as she kept up her brisk walking. We stepped into the street to cross at the next corner. Instinctively she reached for my hand even though I was way too old for this. I took her hand as I looked over my shoulder and saw the woman cutting through the gas station and moving on her way. With the lift of her skirt, she’d called their bluff, stopped them in their tracks. She might have been crazy but even then I knew I’d witnessed something powerful.

A few years later, when I was about 17, I thought back to that woman. My mother and I were exiting a subway car. By then, my fully developed body seemed always to announce my arrival before I was ready to be noticed. As we left the car, pressing along with the crowd, a man behind me cupped his hand between my legs. Shamed by his grab, my cheeks red, I heard my mother berate herself. “I should’ve made you wear a slip,” she said. To my mother, a slip—that thin membrane between propriety and cheap—could mean the difference in how men treated you. To my mother, a slip could save you from ending up in a field like the Black Dahlia.

But as I was beginning to make my own way in the world, I wondered.  Maybe what really saved you was the courage to growl, honk, and lift your skirt. 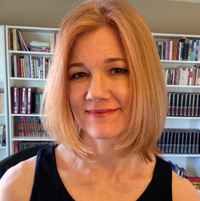 The essays of Andrea Jarrell have appeared in The New York Times “Modern Love” column, Narrative,  Memoir, Literary Mama, The Washington Post and The Christian Science Monitor among other publications. “On the Miracle Mile” is part of an essay collection she’s working on—a memoir in stories. After growing up in Los Angeles, she lived in Austin, Santa Fe, New York City, a small town on the coast of Maine, Paris and now suburban Washington, D.C. Place factors into her memoir in significant ways. She is a graduate of the Bennington College MFA program and a recipient of a Martin Dibner Writing Fellowship.