[slideshow_deploy id=’14638′]
You can’t return to the days of Polaroids. Not really.

There are modern approximations—crafty mimicry that recalls the once ubiquitous family camera. I like the app Hipstamatic, a high-end photographic fast food that can reproduce the bygone look of analogue photography with the convenience of a cell phone. Then there are the dogged geniuses of The Impossible Project who recently reinvented the defunct self-developing film. But if you grew up during the days of the first Polaroid cameras, those instant snaps became forever entwined with your childhood. Here’s one of me with our cat, and our mother’s handwriting. Typical in our family, the photo was about the cat, not the child: 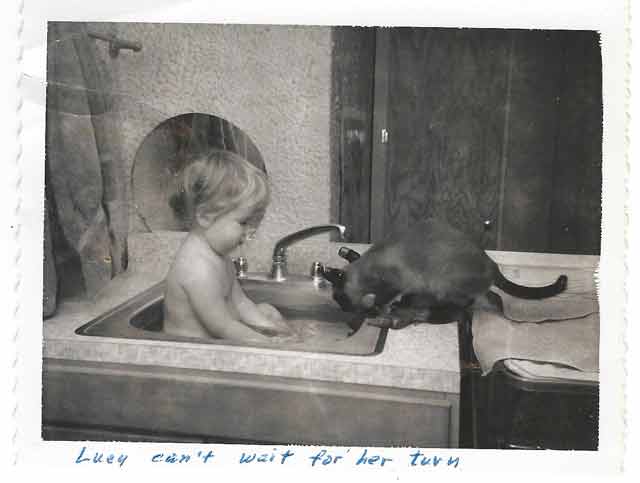 Our parents were unsentimental, and discarded the old camera when something smaller and lighter came along. But during the 1960s, theirs was the J66 Polaroid Land Camera, gargantuan by modern standards, with a 14mm f/19 lens (according to the manuals one can still find online). It was a complicated machine compared to the later iconic Polaroid cameras that spit out one photo at a time. The film came on a roll, and the user had not only to move the film through the pressure rollers to start the process, but also had to wrench the protective paper out of the camera to initiate developing. After counting to ten, you opened the camera back, peeled out the photo, and immediately preserved it with careful, even swipes of the peculiarly aromatic fixer tube that came with each roll of film. It was a ritual I reverently watched my mother perform countless times, in slack-jawed admiration. The photographic options of the J66 were streamlined to near point-and-shoot levels, the assumption being that users didn’t know their way around a camera, and didn’t care to. “Learn to hold the camera steady by pressing it against your face,” the manual suggested helpfully.

On my lap now is a family album dated 1961-1965, containing 3 x 4 inch deckled-edged pictures taken with that Polaroid camera. The instant gratification the camera provided meant that it was used often, recording seemingly mundane moments that would otherwise have been forgotten. I see not only the faces and stuff of our childhoods, but a shocking revelation that the house was once tastefully, even sparsely furnished, showing clean lines long since obscured behind lean-to bookshelves, walls over-populated with pictures, and thickets of knickknacks. Even the oak floors were visible—before the ’70s buried them in wall-to-wall. Many things haven’t budged in all this time. When the everyday is photographed and archived—and then fifty years pass—the frozen scenes acquire a gravitas they lacked at the moment.

The time is nearing, after almost sixty years, when the house will no longer be ours. I find myself compelled to photograph and archive this place that retains so much history, so many pieces of our lives in the very walls and wood. My three siblings and I ran amok here, grew up, moved out and in many times. Our parents grew old here. Grandma died in the cottage behind the house, and Dad in the living room. Our mother is old, so old she wanders in her mind and forgets that her husband died over a year ago. She fears that he won’t fit next to her in the narrow hospital bed that replaced the sagging king-sized one in their room at the top of the stairs. How do I memorialize this house, these people? It is a place where change had happened reluctantly or not at all, and now irrevocable change is looming. For now, at least, some change is held at bay: drink time is still four o’clock, and so it will be until none of us come here anymore.

And so I have taken to photographing in a manner antithetical to the lickety-split days of modern documentation. I am using pinhole cameras that I make myself. The basics of a pinhole camera are simple: There is a container (a box, or can, or other such empty enclosed space). There is a tiny hole to let in light, and something to cover it when you wish to prevent light from entering. Finally, there is the photo-sensitive surface—paper or film—placed inside the container. The Polaroid J66 took snapshots in a fraction of a second. The exposures I make must, by nature of the pinhole’s technology, sometimes take as long as forty-eight hours. Because I am looking back over extended, stretched time, it seems fitting that snapshots should give way to the long, stretched exposures afforded by a pinhole. Time, as we experience it, is fickle. I am slowing things down, and breathing in and out thousands of times as one simple latent image evolves.

I set my cameras around the house, beginning each exposure by peeling off the black tape from the pinhole. A camera watches, unmoving, spying for as long as I allow it. It sees the light and dark and begins to gather the two, pulling them in, creating tonal ranges, drawing the lines and curves of the vista within its angle of view. People can go about their business, might even stop and stare, but they pass too quickly to register. Not even a ghost of them remains—unless it is my mother, who sits in her chair for hours on end these days. Only the still and the illuminated will be laid down on the emulsion.

I do not tidy the clutter of the house or clean off the dust. Beyond clearing a space for the camera, I leave things be. The results show the inherent distortions and sometimes unpredictable occurrences of pinhole photography, a scene strewn with blinding highlights and murky shadows as the sun comes and goes and returns again outside the windows, and the lights of the inside are turned on and off in their normal course. The images are like a day’s worth of security camera footage, condensed into a single frame.

I’ll do this until I can’t anymore: choose a spot, and with a giddy sense of reverence, reveal the pinhole and walk away to go about my business. “Go ahead,” I murmur. “Do your thing.”

Russell Creger Barajas was born in Stanford, California. She attended college, skipping from UC Berkeley to College of Marin to San Francisco State like a stone across a pond. She eventually garnered a degree in art. For ten years, she worked as a goldsmith. While living in Colombia in the early ’90s, she began writing nonfiction and short stories, and has published in magazines and newspapers on a variety of topics. The uneasy intersection of art and writing is what excites her most. Russell currently lives in Arlington, Virginia, with her husband, three sons, and two or three dogs. Her short story “You Were Going to Tell Me” appears in Cleaver’s Issue No. 2.