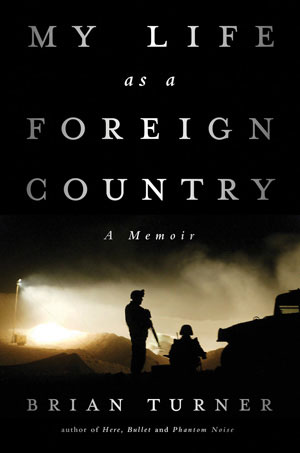 MY LIFE AS A FOREIGN COUNTRY: A MEMOIR
by Brian Turner
W.W. Norton & Company, 240 pages

Just a few years into the Iraq invasion, I remember a certain amount of critical hand-wringing over the absence of War Literature, or the absence of an audience willing to receive it. We had the relentless daily body counts, the Iraqi countryside reduced to numbers and the names of cities. We had news. What we were waiting for was a sense of perspective: writers who could walk into the news cycle and persuasively inhabit the numbers. Preferably we wanted soldier-poets, in the Wilfred Owen tradition, who could combine the insiders’ perspective and personalization with a capacity for irony. In a decade characterized by the deterioration of public institutions and increased privatization, we wanted, oddly enough, more privatization.

Ten years later, we have a crop of fine veteran-writers and a receptive market, from Kevin Powers’s novel The Yellow Birds, Phil Klay’s stories in Redeployment, and Brian Turner’s poetry collection Here, Bullet. Turner, who has been praised as the poet of the Iraq/Afghanistan Generation soldier-writers, has now released his much-anticipated memoir of seven years spent fighting in the Army. Even in its title, My Life as a Foreign Country seems to offer up that promised personalization of the war.

Ironically, Turner writes best, and most personally, about feelings of depersonalization. The book opens with Turner’s vision of himself as a drone, a phantom hovering over his sleeping body, ready to perform reconnaissance. Here and elsewhere, Turner’s work emphasizes the tension between the soldier-writer as observer and as participant. “Soon local Iraqis will refer to us as ‘the ghosts,’” Turner writes, “because of the speed and silence of our approach.” Ghosts become a broader theme, encompassing the dead but also the living displaced. He imagines the “slow-moving ghosts” of Mosul, “returning to their homes each night to sleep with the ones they love.” Meanwhile the soldiers at war slip away each night to clean sheets with their girlfriends in Baton Rouge. The book is a love song to the infrequency of ever occupying your own body.

It’s also a loving, complicated tribute to the marital culture that runs down the male side of his family, which seems to have fought in every armed conflict since the American Civil War. It’s a record of what it means to inherit masculinity, and the skittish terror of inadequacy stamped on its backside. After being mauled by a drunk trucker, his father “never had to say a word about it. The scar said it all. The scar said he could take it. Pain. Hardship. Trouble… The scar said—that which is written in the flesh is irrefutable. This is the mark of a man. This is what it takes.” 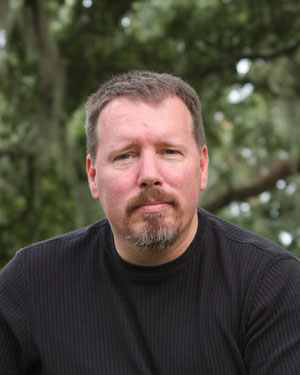 Turner understands the childishness of that wanting. In a perfect moment, he recreates the war film he made with friends in middle-school, the boys darkening the peach fuzz on their upper lips with mascara. It’s a rehearsal for the role-play and artifice of real armed conflict—the enemy soldier’s head replaced, for the kill-shot, with a watermelon “filled with sheep’s blood and pig brains from Cherry Auction.” It makes you wonder what all this mannishness will come to. After the explosion of sixteen Iraqi policemen, Turner writes, “There is a mustache, alone, on a sidewalk.”

Turner can make masterful use of understatement: At one point, having almost blown up an old woman and her family, he compensates her for the two chickens that did die with “the seven dollars I have on me at the time.” More often, he overreaches. His usual cinematic range is high and furious. This is the kind of book where, when sheep get blown up, “you can watch their jaws mouthing upward toward God.” It’s also a book with strong sympathies for the Gothic imagination; he perpetuates an angsty set of vocabulary and imagery for pain, depression, and despair. There’s a lot of darkness and whispering here, a lot of plaintive references to autumn. Foreigners have “ancient” faces and voices, eyes like stone or rivers or anything else that situates them in a vaguely Middle Eastern landscape.

From a poet, all this is surprisingly prosaic, and often frustrating. For some readers, it may raise the uncomfortable question of how far Turner’s soldier credentials have gotten him in the literary world. One of his poems from Poetry magazine observes, “Nothing but hurt left here./ Nothing but bullets and pain.”

While presented as a memoir, the book isn’t quite so candidly that. Readers who come to Turner looking for a sense of what really happened will leave disappointed; while the memoir is filled with discrete events, it’s mostly plotless, a series of reveries just a few paragraphs long. Turner is a poet; he prefers to occupy moments, rather than narratives.

He also prefers to occupy other bodies, exploring depersonalization in another sense. In a book marketed as autobiography, Turner spends a remarkable amount of time inhabiting other people: a fellow solider, a female suicide bomber, a Japanese kamikaze pilot. These feel like drills in empathy—admirable exercises, on a spiritual level, but not done well enough to justify their frequency.

That’s a gorgeous rendition of moving parts, carefully plotted into movements—death, education, children—that don’t, for the main, feel easy or condemnatory. It’s the most intensely novelistic section of the book, all sides felt out with empathy.

As a quick consultation with the footnotes will tell you, it’s also one of the many sections of the book drawn from other writers. This section is modeled on Rick Moody’s much more civilian, but much more terrifying, “Boys” (as in, “The boys enter the house”) from Demonology. Sometimes the footnotes show that dialogue you had winced over was drawn from someone else’s poem—the whore whispering “a damn sad thing,” the cousin observing that “we seem to be floating, rising, transparent as smoke.”

Turner doesn’t have a responsibility to present, in his writing, his “real” self or what “actually” happened. But his best work demonstrates a responsibility to his own perspective, even as he strains to escape it. In one of his most successful passages, he describes his company making models in preparation for a raid:

Torn pieces of cardboard from an MRE package serve as houses, arranged to resemble a suburban street. And the men laugh and joke with one another while they create the model. They don’t talk about the people who live in the target house, third cardboard square from the left… For now, they are soldiers. They are giants standing over the model of someone else’s life.

Even his less-than-successful inhabitations are admirable, if immature, motions towards empathy. Turner has acknowledged this in interviews, calling himself “a rookie”: “I’m a very incomplete spokesperson because there are so many voices.” Observation Points, he calls them, borrowing military terminology. The unvoiced story here is the narrative of a kid from Visalia struggling to inhabit a more public space, something greater than himself—a country, an army, a man. It’s that ghost leaning out from his body, trying to become more than he is.

Jamie Fisher is a freelance writer, Chinese-English translator, and budding manuscript conservationist working out of Philadelphia.  She graduated recently from the University of Pennsylvania, where her majors were Linguistics and East Asian Languages & Civilizations. She can be reached at [email protected].