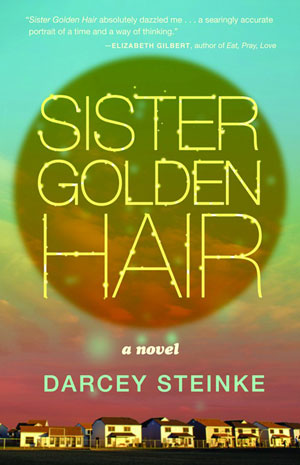 The epigraph to Sister Golden Hair cites a line from the Modern Lovers’ 1970s era song, “Hospital”: “I’ll seek out the things that must’ve been magic to your little girl mind.” But in this story, instead of “magic,” we get cloying bits of superficial whimsy. While author Darcey Steinke weaves an amusing series of tragic characters into the story, Sister Golden Hair is sabotaged by vapid details, jarring, nonsensical metaphor, and a patchy, dull narrative.

Our narrator, 12-year-old Jesse, has moved with her family to a shoddy housing development in Roanoke, Virginia. Her father, a former preacher ex-communicated from the church for his far-out hippie leanings, has dragged his family up and down the Atlantic Seaboard in search of work. As he struggles to make sense of his morphing spirituality, Jesse struggles to make sense of her own morphing adolescence. She wobbles along the tightrope between girlhood and not-yet-a-womanhood: she languishes over her flat chest, dreads the arrival of her period, and is teased over her nerdy clothes –predictable dilemmas that have been told with more wit and insight from the likes of Judy Blume or Judd Apatow.

After Sandy abruptly makes her exit in the story, we jump ahead to another character—Jesse’s classmate Jill, a fellow outcast. In Jill, Jesse finds a confidant—with her, she can share the more juvenile aspects of her imagination, like play-acting ancient burial practices, or pretending to be unicorns. But Jill is forced to grow up much faster than Jesse, and leaves her stuck behind in Childhood.

Often, Steinkne reaches for the absurd metaphor. In one instance, Jesse describes watching Jill perform chin-ups during gym class: “The narrow muscles of her neck stood out like hotdog meat.” Huh? The bad figurative language doesn’t stop there. The most mundane events in the book seem to be the ones embellished with the most tedious detail. 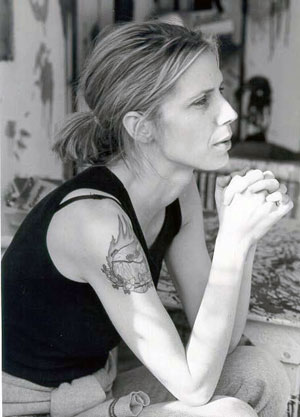 After Jill’s departure, the story jumps ahead three years, and I had trouble buying the author’s assertion that little, if nothing, had changed for the now 15-year-old Jesse. It’s, uh, been awhile since I was 12 or 15 years old myself, but from what I recall, a lot can change in those three years. If Steinke aimed for this to be a classic coming-of-age-story, it was a sloppy move to replace these three years with a feeble summary of what had happened in the interim (which was: she gets her period; Patty Hearst was kidnapped).

Despite, or because of, these holes, the story moves quickly. By the last two chapters, the threat of schoolyard bullying has more or less dissipated, but it’s been replaced by more prevalent, and immediate, threats of emotional and sexual abuse. Jesse’s confrontations with these issues are the most well written parts of the book, and Steinke sprinkles Sister Golden Hair with a handful of darkly amusing moments.

After years of pining after the friendship of Sheila, the most popular girl in school, Jesse finally gets the chance to bask in the glow of her 15-year-old glamor. Sheila is an aspiring Playboy Bunny, and cajoles Jesse into joining her world of ludicrous beauty and diet regimens that ring absurdly prevalent today. They measure the space between their thighs (I didn’t know girls were obsessed with achieving an optimal thigh gap in 1976), embark on a “paleolithic diet,” and guzzle a concoction of lemon juice and cayenne pepper—today’s Beyonce-certified “master cleanse.” Still, stilted dialogue and vague characters mask any attempts at poignancy, or at the very least, some sort of resolution.

The tone of Sister Golden Hair is confused—is Jesse’s “journey” a somber one? Is it humorous? Tragic? Absurd? If the epigraph were any hint, it should be a reflective meditation on all of these feelings: the ones that constitute the dark, confusing, and yes, sometimes beautiful, “magic” of growing up. 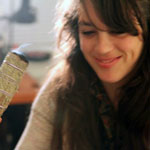 Devon McReynolds lives in Philadelphia and writes for the Emmy award-winning documentary series “Philadelphia: The Great Experiment.” She holds a B.A. in History from UCLA. Her work has appeared in the Los Angeles Times, the Huffington Post, and the Village Voice.