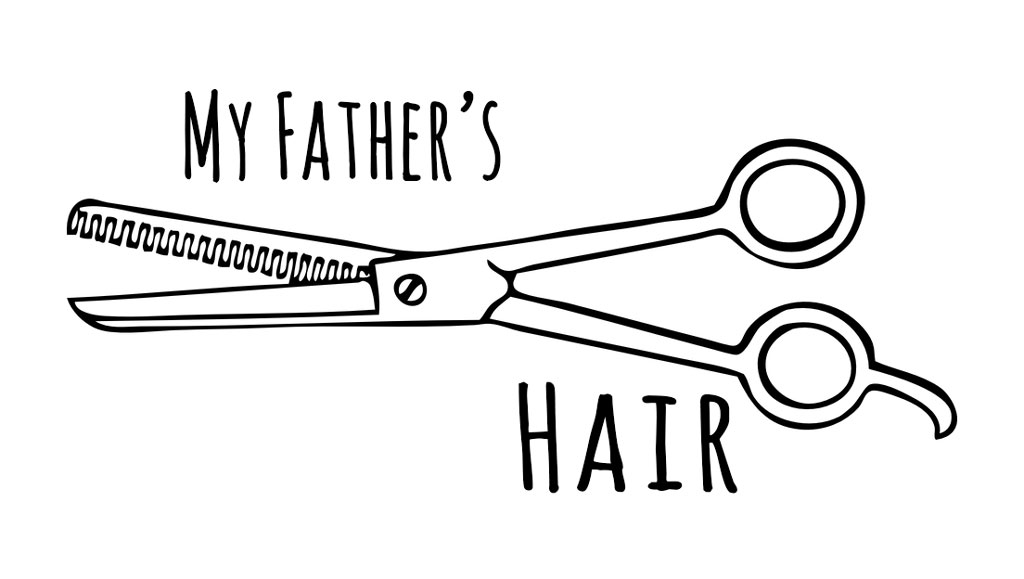 MY FATHER’S HAIR
by Sara Schuster

He took about a week to consider.

I imagine he woke up Monday, wearily shaved his cheeks and chin in his bathroom, then stared at his hair in the mirror. Tuesday, the same. Wednesday, with frustration. By Friday, disgust.

Sunday, he stood at my bedroom door with a pair of scissors and a pair of pursed lips, unwilling to verbally admit his defeat. “You swear you’ve cut hair before?”

I nodded, surprised he’d held out as long as he had.

Four months earlier, Christmas Day, my father woke up with shingles in his right cranial nerve five. We assumed a rash and a fever, perhaps the flu; he was eighty and his illnesses had begun to crash with no warning, so we had become accustomed to waiting them out. Three days later, the rash was gone, but post-herpetic neuralgia replaced it, giving way to severe nerve damage. The number five nerve extends like a hand with five fingers, if you place the palm at the ear. One finger wraps around the chin, one below the nose. One on the right cheek, one toward the right eye and eyebrow, and the thumb, running north from the ear. On nerve activity scans, all five lit up in red, which my father joked made perfect sense because it felt like they were on fire.

And that was really all he said—avoiding further discussion, he left me fuzzy on the details of his illness for most of my adolescence. I did know that he refused medication to lessen the pain, choosing hours of stony silence spent on the couch with the lights off over opiates. In later years, he’s mentioned to me that the few times he took them, he could barely keep himself awake, and for the first time truly felt old. But to a fifteen-year-old, this refusal, and the diagnosis, seemed inane—as I tiptoed through to the kitchen, I couldn’t understand why nothing was being done; no procedures, no operations, no solutions. “Incurable” made little sense to a girl who had barely had the flu. Yet here my father sat in silence for the third week, his forehead in his hands, because waiting was the adopted treatment. Petulant, teenage me was ill-equipped to partake in this stakeout, so if I wasn’t sequestered in my room with television, I was avoiding the dark living room by spending weekends at my boyfriend’s house.

The detail I was clear about was the status of his hair, which he talked about with a remarkable constancy. His standing monthly hair trim went neglected, and the fringe around the base of his skull quickly grew unkempt. He’d grumble at dinner: “I look like an old man.” “I have a mullet.” “I feel like the back of my neck is wearing a blanket.”

In the early months of recovery, he’d wince if any part of his head was touched, bobbing and weaving in a self-protective two-step whenever my mother or I came near him. We stopped hugging in the mornings before I left for school. My mother, frazzled, stopped calling to find out where I was every day at five. On the nights I did come home, I quickly noted that we no longer ate vegetables (because my father hated them) and that instead my mom made pasta and put in extra meatballs because it was his favorite. Uncharacteristically, I chose not to complain.

I’d hesitate before entering the house, attempting to prepare what to say. In the way that teenagers so often do, I lacked the vocabulary to ask him about how he was hurting or what I could do, regularly scrambling for language that felt appropriate. While I had overheard murmurs of these conversations between my mother and him, emulation seemed impossible, and the strain I caught in my mother’s exhausted whisper was frightening. Scuttling in the house and mumbling a barely audible “hey” as I passed, I’d sheepishly remain hidden until dinner.

There, across the table from me, hunched over the parmesan, he didn’t look much like himself. After months of wordless observation, my gaze alit on his shoulder-length hair, and I found something to say. Between bites of rigatoni and meatballs, I volunteered.

We’re a family of vanity, so what began as tepid acceptance soon turned into a ritual. My father would peek his head into my door in the early afternoon once every third Sunday, after I had finally hoisted myself out of bed. Working up the nerve to state his intent, he’d feign nonchalance as he made his way around my room. He’d walk to the window and pull down the blinds a bit, causing the previously settled specks of dust to sparkle when they caught the redirected shafts of sunlight. He’d organize books and wipe rings of condensation off my desk. In the haze of a recently-woken adolescent, I’d continue watching Law & Order on my computer as though zombified. This round of cat and mouse would go on until he finally broke:

“Do you have fifteen minutes?”

I’d exhale, responding that I didn’t. He’d nod, and turn to leave, when I’d get up to grab the scissors. “Where are you going?”

“Not if you’re too busy,” but his fingers, brushed with arthritis and refusing to bend easily, were already toying with the inch or so of hair he felt was too shaggy. Not that there was even much to fuss with: the majority of his head was bald, hair only running from ear to ear, wrapped, as we joked, like a fur head-warmer. He once had thick, black hair that hung long and curly at his shoulders. A denim designer for Sears Roebuck in the seventies, he’d chosen his hair over promotions, leaving to start his own business when his boss pushed him to cut it. Though that hair left him long before I was born, I’d grown up surrounded by photographs on the walls, paying homage to his curls.

When my dad talks about his youth, he talks about his dog, King, whom he swears was half wolf. He tells endless stories about his childhood in Depression-era Brooklyn, where a pickle was five cents and his mother smoked a pack of cigarettes every day. He talks about the girl he tried to marry at eighteen, for whom he hitchhiked from Durham, North Carolina back to Brooklyn only to find her engaged to someone else. And he talks about his hair. For all of these vignettes, I nestle beside him on our living room couch and doze, while he watches the news and resumes his stories during the commercials— in part to me, in part to himself. As a young child, I used to bury my face in his stomach at the same time, listening as much to his voice as to the gurgles in his belly; the two together in harmony sounded satisfyingly alive and reassuring to me, and I delighted in his warmth.

It took just under two years for his nerve scans to move from red to yellow, and then to a sustainable, even ignorable, green.  I went to college, and he returned to his barber.

But I can still easily feel the heartbeat in the veins beneath the silk of my father’s scalp, as though my hands are only centimeters away. I remember wondering if the pulsing lined up with the pain of the frazzled nerves, then chastising myself for creating a visible reality for an invisible occurrence. How physically tangible can the synapses of one’s nerves be anyway, or for that matter how real? I didn’t want to ask, probably because I really didn’t want to know.

The muscle memory returns, too: I can still feel the strain in my mouth, tense as I wielded the scissors and refused mistake, and feel how the the rest of my body poised like a statue as I moved the blades around the nape of his neck. I’d take barely an inch off of his baby-fine hair and watch it flutter, like feathers, down into the sink. In this real-life game of Operation, I knew intrinsically the repercussions of allowing the blades to even brush his skin.

He went from asking to demanding; I went from offering to submitting with caustic, adolescent sarcasm. We verbally scuffled every time he would scrutinize to make sure the ends were even. We brought in rulers, occasionally took photos on my cellphone to pour over and dissect how even the cut was in the back, and inevitably fifteen minutes turned into an hour.

“I don’t want to look lopsided, Sara, I’m not some crazy old man.”

“Why would I make you look crazy? Jesus, trust me for, like, one second.”

“Jesus doesn’t know you from a hole in the wall. I would trust you if it wasn’t already lopsided.” Touché.

“I think it’s your head that’s lopsided,” and our eyes would meet in the bathroom mirror. Me standing behind him with tufts of hair in one hand, big gray craft scissors in the other. Him seated below me and obstinately repressing a grin.

I’d hold my breath and raise the scissors once more, knowing the hair was not even, but also that my confidence was wavering and that my fingers begged for a break. Yet, as I navigated the globe of his mostly bald scalp, he never flinched. Lost in his desire for the hair to be perfect, he’d forget the fiery nerves and the fear of being touched. Perhaps even the shingles altogether.

The truth—I hadn’t cut hair before. Somehow the blades never so much as grazed him. 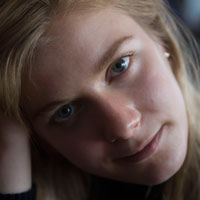 Sara Schuster is a recent graduate of the University of Pennsylvania. She writes short stories and personal narratives focusing on memory, health, and bodies (especially her own). Her most recent work is a thesis on recovering from anorexia. Other published pieces can be found in the Penn Gazette.