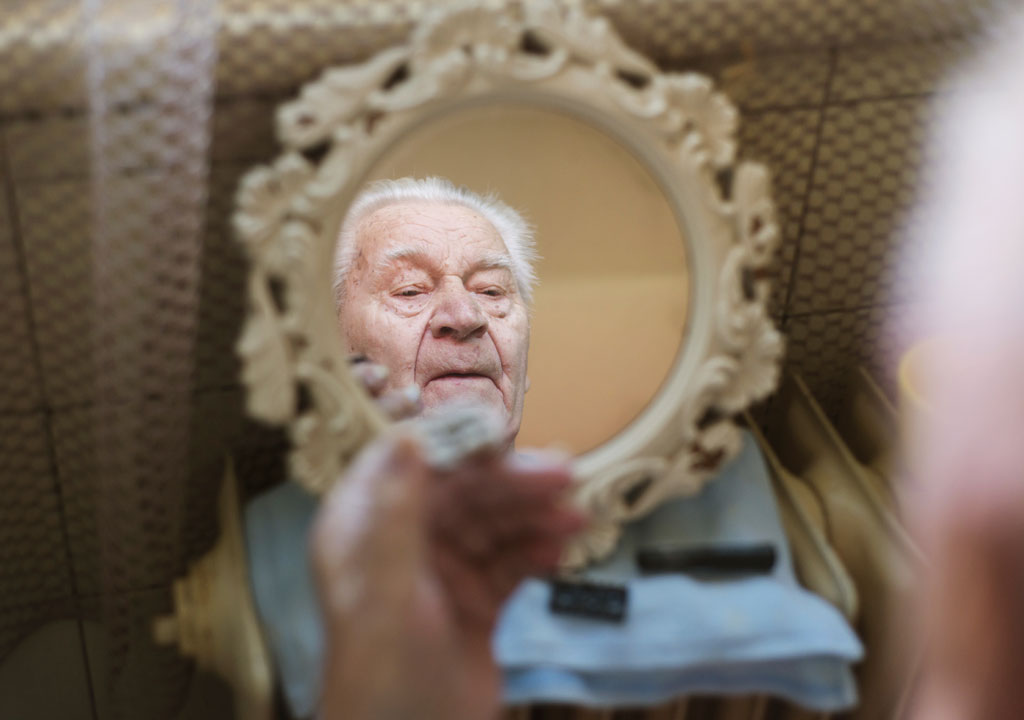 At home, we covered up. Mine was a house full of brothers.

A closed bathroom door meant it was occupied. Occasionally I’d find the upstairs bathroom door ajar and push in, only to catch my father shaving. He always shaved nude. The long mirror over the two sinks was shrouded in steam except for the watery oval he cleared in front of his face. His bicep—round as Popeye’s—flexed as he swept the razor downward to reveal a stripe of skin. Like a drop of water that knows to leap off a griddle, I pulled the door shut.

Such squeamishness had disappeared by my father’s last year.

One afternoon, I heard a heavy thump while he was showering and ran into the bathroom. I opened the glass door to see him struggling like a beetle on its back.

He’d fallen before, but on the thick carpet of his bedroom. I learned then that he didn’t have enough strength in his stomach muscles to roll over, much less to sit up. Fortunately, his leather belt made a good handle; I hauled up on it while he strained to get to his hands and knees. Then I coached him to reach forward and lean on a low chair before pivoting his bottom around to the seat. Those Popeye biceps were his salvation.

As he lay on the floor of the shower, his wet skin shone like alabaster. He sucked in his breath, hiked his knee to his chest and swung it to the side. Air exploded from his lungs. He panted, then tried again.

I grabbed a towel and covered him. I wasn’t embarrassed by his nudity. I was just afraid he’d be cold. He looked at me. I had the feeling he was wondering how he—we—would get out of this mess.

I tried to explain that he had to get onto his knees, but I knew he couldn’t hear me without his hearing aids. He did his best to cooperate as I gestured instructions. I rolled him onto his side and bent his legs into a 45 degree angle. He tried to right himself. The towel slipped and I lost my grip. He rolled back onto the tile. When I threw the towel aside, he didn’t flinch.

Let’s try this again, I said. I knew I couldn’t lift his 212 pounds of mostly dead weight without injuring at least one of us. Twice more I positioned his legs and locked my arms around him. I remember noticing how hard his belly was, swollen with fluid. Just at the point of giving up, we somehow jockeyed him onto his hands and knees. He grabbed the back of the shower chair, then paused to recover before shifting the other forearm onto the seat. When he finally maneuvered himself into a seated position, I swaddled him with a bath sheet.

As far as I was concerned, the 45-minute wrestling match proved my father’s days of independent showering were over. He disagreed.

“You have a choice,” I said. “You can shower here with my assistance or with help back at The Hacienda.” The Hacienda was what he called the senior living community where he maintained an apartment. He never remembered its real name.

I had used the same strategy on my children—offering limited options as an illusion of choice.

I reminded him that a serious fall in the shower could mean the end of our walks. Walking with me made life worth living. Every day, when we left the confines of the house, his eyes stretched to the horizon, appraising the sky, appreciating the season. He gave in.

The first time I stood sentry outside the shower, I watched through the thick glass: he wet down, shut off the water, spun the soap in the washcloth, scrubbed from head to toe, privates last, turned the water back on, rinsed off, and then repeated the entire process. It was after I handed him the towel that I discovered how he’d been upsetting his balance. He straddled the towel, grasped it with one hand in front and the other in back, and see-sawed it back and forth. Once upon a time, his routine had kept him fit for duty on Saipan, Tinian and Iwo Jima. Now, it was setting him up for a fall.

From that point on, I entered the shower as soon as he turned off the water, wrapped one towel around his waist and draped another around his shoulders. He grabbed the safety bar by the door and stepped gingerly onto the white pile bathmat, reaching for the handle of his walker. While he rested on its seat, I rubbed lotion into his back, arms and legs.

I saw it all then, the edema that swelled his ankles, the puddle of his feet, the scabs on his calves, the trail of brown moles, the bruises that bloomed purple, the white scar on his sternum, his pale buttocks, and still, those Popeye biceps. Once upon a time, I remembered, they’d held me high above the surf off Barber’s Point. He’d been the one to keep me safe. 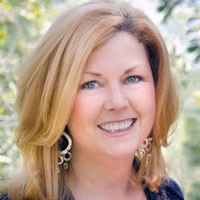 Betsy Campbell Stone is an emerging writer from Sacramento, CA. She retired from her career as a healthcare strategy and marketing executive to care for her father, Henry, then eighty-nine. Over his final seven years of life, she returned to writing. While pursuing her M.F.A. in Creative Nonfiction at Bennington College, she supports nonprofits in their missions to end hunger, aid caregivers, and promote comfort at the end of life.