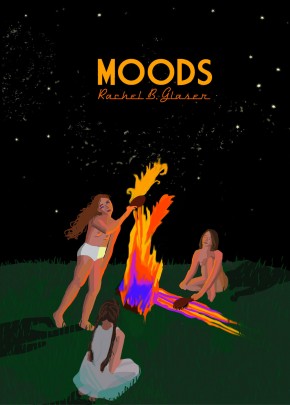 MOODS seems innocent enough at first glance: thin and neatly printed, the poems average about two short pages in length, while the cover art – bare-breasted women combing colors from a campfire with hairbrushes – advertises little more than a squishy meditation on divine femininity or the joys of stereotypical womanhood.

In a certain sense, Glaser delivers on this front; her poetry is comprised of mystical generalizations about female sexuality, menstruation, and emotion, but the author’s manipulation of these societal tropes is expertly done — they become threatening, subversive. Glaser throws foolish stigma in our faces:

Her female subjects are (as they should be) difficult to pin down, at once susceptible to higher powers (God, psychology) and ruthlessly assertive, dominating their male counterparts, as in “Donna and her sister,” where a hapless Sal is driven to admit that “I’m not what you need, I think”.

The poet attacks (perhaps) commercialized/singular definitions of femininity, evoking Hollywood absurdities in such lines as

many women only feel feminine in the water

near dolphins
or when a saxophone sweats and strains

or classifying, in “Grand Variety,” various types of orgasm by brand name. But it is impossible to tell, amidst punctuationless lines, how much Glaser defies these definitions, or embraces them (e.g., “my boobs looked so good I had to show his kitchen”); almost certainly she does both, but to what extent?

This ambiguity pervades the entire book (which, it’s important to note, is far from neatly categorized feminist diatribe), and is emphasized by Glaser’s sharp humor. A casual sensibility refuses to be suppressed between Glaser’s weightier matters, alerting the reader to at least some degree of satire. Lines like “pleased as if I just personalized a web-pet”, “I ignore policemen and eat

at the salad bar”, and

one of the cats we hated, one we revered

both we tried to lose on Craigslist

merit audible laughter and are refreshing to see in a book of contemporary poetry. Yet the reader also gets the sense that these phrases are not careless jokes inserted for purposes of gimmick: Glaser juxtaposes playfulness with abrupt seriousness, as in “Thanksgiving didn’t happen,” leading the reader to laugh first out of amusement, but rapidly, instead, out of nervousness:

also, that Thanksgiving didn’t happen how they said
all it was, was two Indian boys
who shared some deer meat with two Pilgrim girls
and (big surprise)
their families freaked out
the girls got sent to boarding school
the boys were sent into the woods to “think”

In light of such schizophrenic voice — such inconclusive endings — one can hardly blame the reader for half-believing Glaser when she suggests, “I’m not joking, I’m crying”. Indeed, there is a sense of gravity and truth to these poems, confronting such hallowed figures as God and the poet. In “The bat,” for instance, Glaser begins,

but admits by the end of the poem that “yelling at the sunset only made us believe in god a bit more,” that “we wanted a hand to grab us”, expressing an earnest religious yearning quite different from her earlier, uncomfortable sexualization of a very human God in “Sleeping ugly moon.”

Glaser constantly contradicts herself from poem to poem, effectively addressing (if not eliminating) the ever-present temptation in the reader to equate author with the imagined cohesive “I” between successive poems. One hesitates to classify this contradiction as a postmodern approach to self for fear that Glaser would scoff poetically at such a label; her jabs at the “blah” artificiality of the entire poetic enterprise, regular and articulate, do, after all, breed a necessary mistrust in the reader, who comes to believe that perhaps the author is just as confused regarding the perplexing adamancy of her lines as they are.

Glaser is both aggressively, ridiculously contrarian (see “Incest is lazy,”) and genuinely doubtful; she is, over the course of the book, alternately male, female, poet, skeptic. Her work is an odd hybrid of Billy Collins’s effortless humor and John Ashbery’s profound incomprehensibility, reminding the reader, as they laugh, frown, question, that each of us is, as her poems are, of many mindsets — many moods.