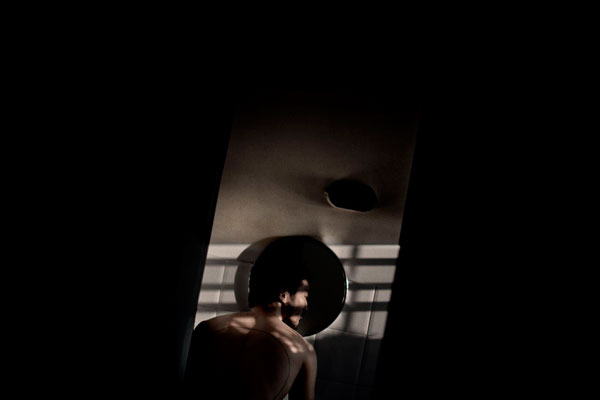 No, you can just watch me and then afterwards we’ll go to sleep and that’ll be the end of it, she said.

You mean that we’ll go to sleep like it never happened.

It never did, she said.

In the glow of the single desklamp, yellow glow, onionskin, he watched her shed her black cardigan like a snake in the darkness, revealing first the shadowy bones of her shoulder blades—very thin and on the verge of falling out of her back like two ice shelves. Then it was the middle of the back, almost all spine and the shadows played on her disks as if they were small mountain ridges in a diorama. There were two moles he had never seen before and a scar, pink-shaded, about three inches long that lay diagonally across the bottom of her left blade. He had waited forever for this. Well, not entirely forever, he thought, because by forever something else would have occupied his mind. As she revealed her arms to him, he saw where the elbows attached the two pieces of each of her arms and, as bad as it was to imagine, he couldn’t dissociate the way they looked from the bones of the cheap and thin raw chicken wings he marinated at the restaurant on Wednesday nights. He felt bad for thinking this and then replaced this feeling for the proud and stupid other one about how she was the most beautiful girl he or any of his friends had ever seen and even just watching her undress was like a second sort of sex to him. Now, she finished peeling off the cardigan and when she breathed, it appeared as if she had inhaled a demon that moved around in her, and exhaling, she gave it back to the universe and, inhaling, she had it again. To him, she seemed to have so much power that she was able to do this easily, willfully, many times.

The pipes rattled in the walls as she turned to look at him, her tanned breasts sighing in the shadows and her flat, almost muscular stomach revealed another unknown dark mole.

She lived at the edge of the woods in a small Pennsylvania town so that even with the windows open there was no human noise and you could see the stars behind her dark figure, resting on the wooden balcony in silence.

Well? she said, standing naked now, half in shadow, half in the yellow light and completely out of his mind like she never had been before.

He wanted to say the thing about how it was enough for him to watch her, like a second sort of sex. He also wanted to say that he had waited forever to see her like this, that she was the most beautiful girl he or any of his friends had ever seen, but nothing came out of his mouth and he wasn’t thankful either because he knew she was sick and he had recently gotten into the habit of only wanting things he could fix—like her bad relationship with a Greek boy who hit her, and her terrible upbringing in New Jersey. But now that she faced him, he could just barely see the demon moving in and out of her eyes—burning and burning like the reflection of those stars on the plants hanging off her balcony and he knew that this was the end of it, that it never happened, that it never did and he smiled secretly to himself but she caught it and moved toward him thinking he was inviting her to bed with it.

He lay up against the pillow and felt her blonde hair hang across his chest as she placed her head on his stomach.  He didn’t know what else to do except to stroke her hair and hope she went to sleep as fast as possible and that she wouldn’t try anything. Holding her, he felt as if he were holding a string of pipes, breathing and sighing beneath him. He stared at his feet and her feet and at the perfect pattern on the sheets, the perfect veins of the plants, the equal, even, perfect burn of the stars and thought that maybe it was about time he stopped using that word. 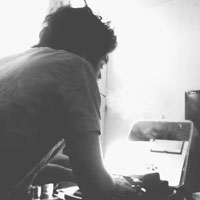 Royee Zvi Atadgy currently resides in Philadelphia after returning from a three-month stint as a farmer in Israel. He works as a part-time oyster shucker and lives with his cat Bubbles in the Northern Liberties section. In his spare time, he walks around the city aimlessly looking at the architecture. Previous publications include short stories in The Brasilia Review, Hemingway’s Playpen, Nib Magazine, and Daedalus Literary Magazine.