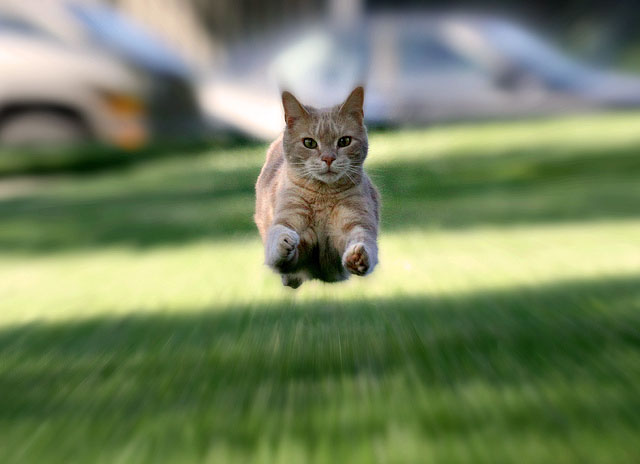 John Henry made circles with his bare feet on the carpet. The overhead light was on a fader, which was set low and gave the room an almost hazy affect. Against one wall was a purple couch, its frayed and shredded fabric covered with overlapping blankets and old bedsheets. Against the opposite wall was the television, which was off. The classical music station was playing some minor baroque drivel; it was set on this station because the jazz station, with its squeaks and honks, bothered John Henry’s cat, Felix, who was currently transfixed by the concentric undulations of John Henry’s taunting foot and the disembodied violins. His eyes were like black saucers, with only a faint hint of silver, a mere suggestion of an iris. “Have you eaten all my drugs again?” John Henry said in the high-pitched, playful voice he used for Felix when his girlfriend was not visiting; no other cats had heard this particular voice, though they had each received their own unique inflection. “Are you tripping balls, murder pants? Are you tripping balls?”

The cat, crouched behind the legs of a dining-room chair, eyed him, then returned his face to John Henry’s feet.

You’d better put on a pair of socks.

“What?” John Henry blurted, and, setting his foot flat on the carpet, removed his eyes from Felix. He was alone in his apartment.

John Henry wiggled his toes. Felix wiggled his butt, probably without intention, but rather as a by-product of the transubstantiation of the toes into prey—such is the capacity for metaphor in the animal kingdom—although who knows what a cat thinks. Or whether thought is an accurate word for their mental processes. John Henry imagined that if he were to inhabit Felix’s consciousness—that was the word he chose, for the sake of convenience—he would go insane in less than a minute. The sudden and inexplicable animation of a cotton mite into a moth, the swell of hot air out of the guttural underbelly of the firmament, and the feeling of being followed, constantly, by some furry double, like a shadow materialized, would be enough to lose higher consciousness in a twitch. He could not explain it, but Felix experienced metempsychosis. A ray of sunlight, a ball of cotton, a wiggling neutered claw all happened upon their true reality—that of flies, moths, and mice. And liquid’s yielding texture as crumbling earth, as melting sands. There was no filter between one and the other. “Reality” is only a word that is put in quotes, as should be “soul” and “god,” because it is experienced by higher consciousness as detached from itself, like a live video playback. Cats probably don’t use quotation marks, but, again, who knows. Thought may not be an accurate word, but if it isn’t for them then it likely isn’t for us, and John Henry wouldn’t presume to know the reality of his own consciousness any more than Felix’s.

A phalanx of metallic tubes, several centimeters wide, through which circulated enough wind to durate pitch; followed by an infantry of vibrations muffled by hair, like screaming bits of smoke uncoiled from cords of firewood; then hammers, whittled, shaped, fur-wrapped, beat on sheets of metal and wrappings of dry skin; in between each outburst an equal, opposite, awful restraint, like a surly and self-righteous vowel in the consonant midst of the alphabet. John Henry only listened to the classical music station when his girlfriend was visiting, except now, when the music, like her, was enough to lure Felix out from the back room for long enough to register a purr and to animate a burlap-wrapped ball of cotton. Her handmade mice were exquisite—hand-cut strips of burlap wrapped around cotton balls, strapped with button eyes, pipe-cleaner tails, laundry lint noses, and seam mouths. As no mice were visible, however, Felix remained for John Henry’s elliptical feet, and for the music.

You are the protector of souls, John Henry, and I am the eater of souls; do you dare defy me, you mongrel cretin bastard?

John Henry tucked his bare feet beneath his legs Buddha-style, and held his gut with his palms, as if to keep his organs from spilling onto the floor. Strings, brass, woodwinds, and drums crawled through the speakers like spiders in the room’s dark corners. A lamp on the couch’s end table burned a 40-watt bulb, though it was designed for 60. Bouncing off the wall was a face, the residue of a 40-watt shadow, that might have grown, doubled, tripled in size, a piece of angry machinery, a broken spoke, a lonely troll in the spirit kingdom, that might have eaten his own shadow into a physical impossibility, had Felix not jumped into his lap at just the moment he was to unfurl his legs and relax. His heels on the coffee table, cranium in his palms…

“Felix, what is it? I’ll give you anything you want, just tell me.” Felix podged John Henry’s lap, one paw then the other, for so long he forgot he had even spoken. When he finally lay down he moved his leg so his head would fit in the nook of his knee. A choir of shaking bones, a chord of ribs, a chorus of white keys blaring through his crotch into the couch. He tried to speak but not through language because he did not have language, so he vibrated through the bones of the sofa, like the departed across the river Styx, in order to ask for one of the mice from the stocking. John Henry’s socks were by the dining room chair, he had checked them already. Strings, tails, whatever, gathered near their entrances. It was possible that John Henry had given him his gift already, and he’d just forgotten. But was it really his responsibility? Felix was in his lap, looking up at him like a child whose mother had relinquished him to the saints, clearly—anxious for something, but—what responsibility did he have toward the creature? Especially if he did not believe in his omnipotence? Did he even believe in omnipotence? The concept of omnipotence could not be beyond cats, who clearly recognized agency behind scurries, thrusts, and the glares of other predators. “I don’t know what you think, or if you can even think at all,” John Henry said, as if Felix hadn’t been present for the last five minutes. “You haven’t been present when I’ve needed you the most. Indeed, you haven’t been present at all.” Felix looked at the wall because it had turned into a spider web. “I can’t help you anymore, Felix. Not with where you’re going. Not with where you’ve been, or are now, and neither with the questions you had before nor the answers you need notarized now and will need stamped forever. Felix, I can’t help you,” he said, and he realized he was crying only because of the salty slug trails he felt crawling down his nose. “I can’t help you anymore, and I’m sorry.”

Your cat has no idea what you’re saying.

The tables were turned. Felix looked up at him, something on his mind, or whatever you call it, but John Henry had no idea what it was. In that moment, their look contained within a tenth of a second, John Henry thought he was Santa Claus, and that his brother Joshua was still alive, and was asking to not have to go to hell when he died. Then it clipped off, like cotton mites, dandelion skeletons, off in the wind. Felix bit his toe, his head crouched and ears flat, and jumped down from the couch before John Henry had a chance to react. A slight residual yowl left the room bereft; a thrift-store painting of a vase John Henry’s girlfriend had bought, “for decoration,” sloughed up on the opposite wall; the beaded gray fuzz of carpet underneath his punctured toenail; the tremulous murmurings of an Austrian, an uncharacteristically equivocating breath between tirades, newly holding forth on the radio, were all the sensations the room allowed in his absence. John Henry wiped his cheeks dry with the back of his hand, for he wanted to forget that they’d been wet altogether, when he’d already forgotten why he had cried and what he’d said. “Felix!” he called, high-pitched, all throat, nearly militaristic. He wiped blood off his big toe with his thumb and wiped it on the couch. Blood blended well with the purple couch in the low light. John Henry looked up and winced. The lights were on faders and needed to be turned even lower. 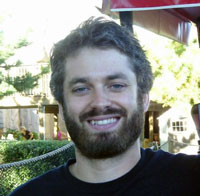 Caleb Murray is from Montana and currently lives in Portland, Oregon, where he works as a kitchen manager. He is a graduate of Linfield College. He is at work on his first novel, Cup of Oblivion.