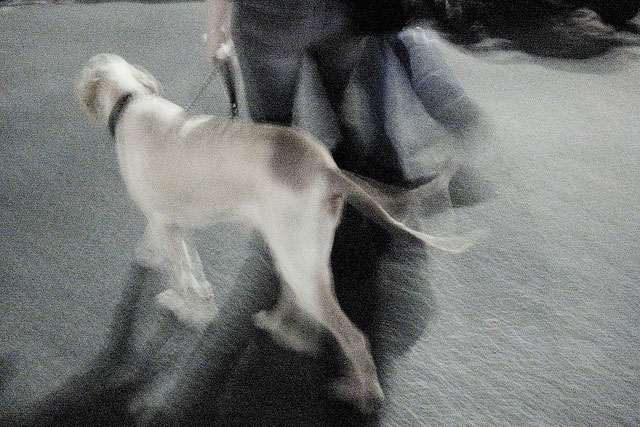 It’s like this: a few weeks ago, my husband got me one of those step counters and now I’m obsessed. On the night in question, he happened to be out of town. I had yet to reach my 10,000-step goal, so I leashed up my two mutts and told my sixteen-year-old son I’d be back in half an hour. The night was cold. The dogs were excited by the scent of deer scat in the air.

My suburban Maryland neighborhood with its tall, leafy oaks and maples is
not well lit. Not a soul was in sight. Just me doing what I chastise other women for—out exercising in the dark, determined to break a sweat despite the possibility of lurking malfeasors. I had my dogs to protect me. Still, I got that hair-on-the-back-of-your-neck feeling as I passed the funeral parlor at the end of our block and walked to the grounds of a former mental institution.

What was once the posh sanatorium Chestnut Lodge is no more, razed a few years ago. In its place a fancy subdivision has sprung up. I walk its brick-lined paths and lush grounds on an almost daily basis. But that night, it was dark and I was busy watching my dogs on the path in front of me, making sure they didn’t poop on a swanky lawn.

I was also wondering—not for the first time—if the current Chestnut Lodge residents (the housing developers kept the name) ever worried about living a version of the movie Poltergeist (you know, idyllic homes built on top of an old cemetery).

I was thinking about all this, while also speculating about whether my little wrist band had registered over 10,000 steps, when I noticed the “MOO” sign lit up in bright white vanity table-style bulbs. Ironic and kitschy, M-O-O was spelled out on the side of a garage built to look like a red barn next to a brand new six-bedroom home built to look like an old country farmhouse. When I’d started walking around the subdivision, I admit to some eye-rolling (and a little house envy) the first time I saw the sign.

The problem was, this was the second time I’d come upon that sign. Worse, MOO mocked me from the same side of the street. Even a directionally challenged individual such as myself could grasp the meaning: I was going in circles.

I stood in the middle of the sidewalk looking right, left, up at the dark sky, my breath coming out in frosted puffs. With the main road nowhere in view, the ridiculousness of my situation was a foot to the gas pedal of my panic. And all the while, I knew my own house was somewhere nearby, but now my dogs’ leashes seemed the only tether to it.

I imagined the shame of having to call my son to come and find me. Not that he would be surprised. He and his sister grew up with me shhing them and flipping off the radio so I could think. Think about where the f$#%k I am. As they got older, I started hiding my disorientation. Lost again? More proof their father was the better parent.

The better parent like my mother, who can whip out a map in any unfamiliar city and have the natives asking her for directions. I married her navigational equal. On countless roads and highways, I’ve experienced that knee-buckling moment of being sure of where I was one second and having no clue the next. I’d peer through my Jetta’s windshield, cell phone to one ear, trying to make out road signs. Back in the pre-GPS days, my teary calls for directions would be met with, “Okay, tell me where you are?” followed by my barking, “I don’t know! That’s why I’m calling you!” My husband would stay on the line, using a slow internet connection and his best guess at my location to guide me home.

For many years, the hardest part of my “condition” was my sense of aloneness in it even though clearly I’m not alone. Just Google, “Why do I always get lost?” Dozens of links will take you down a rabbit hole as you learn about neurons called grid cells and how to improve your spatial memory by exercising and eating oatmeal (seriously). Sorry gang, I’ve exercised and eaten oatmeal my entire life and I still can’t find my way out of a paper bag.

Standing there in that subdivision, I knew it wasn’t my hippocampus that finally gave me my bearings. It was my father. He’d be the first to tell you he used to be a drunk. A mean one, at that. Which is the reason my mother, my life’s true navigator, carried me far from him after I was born, so that we didn’t meet again until I was seventeen.

It took him most of his life and mine, but several years ago he finally quit drinking. About that time, he came to visit me in this same leafy neighborhood. Both of us brown eyed and strong jawed, athletic in our slim jeans. I’d wanted to show him my daughter’s new school. Walking down one block and then the next, I’d decided to take a shortcut. “Wait,” I said, stopping. I stood on the corner looking one way and the other. When I looked back, I saw my long-lost father, the handsome old cowboy from East Texas, studying me. I braced myself for the stream of f-bombs and head shakes that used to come my way whenever he disapproved of something I’d done. “Huh,” he said, moving his jaw side to side. “You do that, too, Kid?”

Standing there with my father, I still didn’t know where we were, but I knew then where I’d come from. And that has both haunted me and given me hope ever since.

That night, dogs restless at my feet, I took a deep breath and, like a kid practicing left and right by placing her hand on her heart for the Pledge of Allegiance, I retraced my steps, keeping M-O-O to my right. Minutes later, I was turning down my own street.

With a half an hour long gone, my son had already started up the block to look for me. “Mom,” he called out in the dark when he heard the jingle of the dogs’ collars. 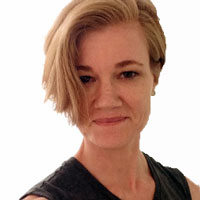 Andrea Jarrell’s essays have appeared in The New York Times, The Washington Post, The Huffington Post, Narrative Magazine, and Brain, Child Magazine, among several other publications. Her essay, “On the Miracle Mile” appeared in Issue 3 of Cleaver.