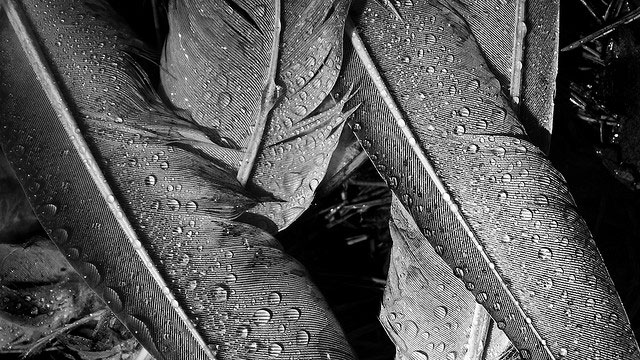 The bird lay shivering on the lawn, their faces reflected dark and alien in his button eye. The other eye, the one on the left side of his head, was shut, or possibly gone. A clot of blood and barbs seemed to fill its place. The woman, called Anne, scooped him awkwardly into a kitchen towel and carried him across the juniper-bordered path to the house, her daughter Anne Marie skipping merrily behind her.

Set against the hardwood kitchen floor, the bird perked up, flapped a wing and began hopping between mother and child. With only one eye visible he seemed to be winking at them, in some overlooked gesture of gratitude or appreciation.

The woman stepped back, wishing she’d left the bird to die. Blood-encrusted feathers trailed behind him, feathers as bright red as the blood on them. He made it as far as the water cooler and stood paralyzed against the metal base, his chest pulsating as if to a tune. “We shouldn’t have brought him in,” she said under her breath.

“A raccoon was going to eat him, you said so, Mommy.”

The woman shook her head. “It was a mistake.”

In the car Anne Marie asked, “What if they don’t want him?”

“They will,” her mother answered across the rearview mirror. “It’s their job to want him.” A persistent tapping came from the scissor-pierced shoebox, poised across the length of her daughter’s lap.

The Animal Rescue Center was a dilapidated one-story etched by tall dry stacks of wheat swaying delicately in the hundred-degree summer breeze. At the reception counter a girl in her twenties with a short-sleeved lab coat and a bracelet tattooed around her wrist took the shoebox from Anne Marie’s hands. The smell of the place was strangely clinical.

“Well, what do we have here?” the girl asked Anne Marie. It wasn’t really a question. Chewing perfunctorily into her gum she peered beneath the upturned lid of the box at the beak resting in shadow inside it. “Seriously injured male cardinal.” She abruptly pulled off the lid and the bird came flying out. Anne Marie’s mother gave a scream and brought a hand up to her mouth. The bird was fluttering in circles around them, chasing himself. He seemed to be flying in the direction of the one good eye, the other eye clearly missing.

The girl climbed onto a chair and plucked him right out of the air; held the bird in one hand with its throat locked in the bend of a thumb. His beak was bobbing like a fish’s out of water, producing a peculiar chirrup, a crackling sound like cicadas in the night. The girl shook her head and winced, as if to say what a shame. “What’s your friend’s name?” she asked Anne Marie.

“Mommy?” But her mother had already taken a pen from her purse and was filling out a form. “Can’t we keep him?” No answer came.

During the ride back home Anne Marie cried herself to sleep. Her mother behind the wheel wept quietly with her. 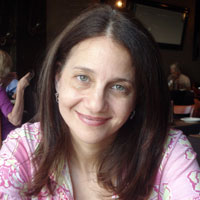 Andrea Rothman was a postdoctoral fellow and subsequent research associate at the Rockefeller University in New York, where she studied the neurobiology of olfaction. She recently earned her MFA in writing at Vermont College of Fine Arts. Her fiction can be viewed in Ducts, FutureCycle Press, and Lablit, and her essay on writing appears in Hunger Mountain. She is at work on her first novel.