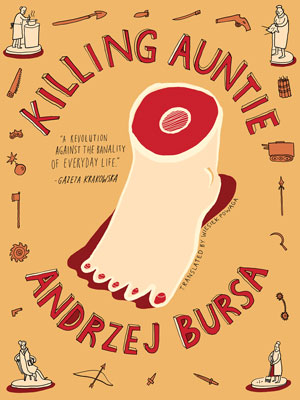 Andrzej Bursa was born in Krakow on March 21, 1932, seven years before the German invasion of Poland. He died of congenital heart failure at age twenty-five on November 15, 1957, just after Poland began to overthrow its totalitarian system of Communist rule. Bursa lived in a time that shifted dramatically from extreme suppression to extreme expression, misinformation and propaganda to jazz and poetry. His literary career began on the heels of the post-war period of Polish literature noted for an emphasis on “Socialist Realism,” but was cut short at the emergence of an era of national sovereignty that prompted an explosion of avant-garde art, performance, literature, and music.

Bursa’s only novel, Killing Auntie, was not published during his lifetime. The novel takes place over the course of a week, during which a young man named Jurek whacks his aunt in the head with a hammer and then attempts to rid himself of her corpse, a more difficult task than he imagines. While it doesn’t ever do anything, or say anything, everything Jurek does is in reaction to the corpse. This is the black humor of the story, which could also be a foil to the atmosphere of 1950s Poland, a time that fluctuated from the enforcement of Soviet sponsored police terror, censorship, and economic strife to the reversal (or decrease) of such policies.

Even without knowing the novel’s political context, Killing Auntie may be understood and appreciated for its stark and unapologetic approach to the (frankly) absurd trajectory of adulthood. Jurek, orphaned, disaffected, and now living on his own, longs for real purpose: “Today for the first time I realized I had no purpose. I went out without a reason. These purposeless, lonely walks were murderous. I knew that.” Jurek’s story is not dark for the sake of darkness (although killing your aunt in cold blood is pretty dark), but to subvert the idea that we all grow up to make families, buy groceries, and pay bills because these are aspirations for a lifetime of happiness. Jurek does not kill his aunt because he hates her. He kills her to have a purpose. 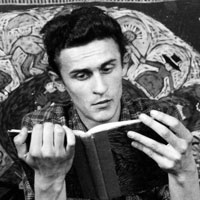 This rebellion against banality is at play in the novel’s structure, which features both a false start and a false ending. The novel opens at 4 o’clock of the day that Jurek has killed his aunt, but at the start of chapter two, Bursa describes Jurek waking up to his aunt preparing for her day. Chapter two isn’t a flashback; rather, the opening is a false start, a beginning that clashes with the information Bursa provides in the subsequent chapter. The false start makes the murder existentially necessary to Jurek. He can’t choose not to kill her because by the start of the novel, technically, she is already dead.

Again, Bursa is not concerned with the crime, but with the search for purpose that prompted it, a search that continues through the rest of the novel and is represented by his aunt’s indestructible corpse. Jurek worries that he might be caught, that someone will notice his aunt’s disappearance, but no one suspects a thing. The corpse, he soon realizes, is both an adversary and part of his new purpose. Jurek’s search comes into conflict once he meets Teresa, who becomes his lover and confidant. Although momentarily disgusted, she too helps him dispose the body. Despite all their plans of escape and love, Jurek finds the burden of the corpse more real and important: “Yet I realized with absolute clarity that the only real thing was the corpse, at once a millstone around my neck and my lifeline.”

The novel could have ended here. We could have taken Jurek’s realization as a choice to live with the consequences of one’s actions. But instead, Bursa keeps going for three more chapters that comprise what we now see as a false ending. Jurek takes the bus into a kind of mirror-world, in which he meets a character identified as “The Girl I Used to See,” who lives in “The Other Town.” After a night together in the woods, The Girl takes him to the zoo to see mating lynxes and then later they feed the animals part of his aunt’s corpse.

Then Jurek’s aunt returns from the sanatorium unconcerned that remnants of her own corpse litter the bathtub.

Given the absurdity of this chain of events, it’s hard to believe that Jurek finds redemption. Because Jurek doesn’t get caught and doesn’t get away with the crime either, we can’t assume Bursa’s ending indicates anything so banal as redemption. Rather, the false ending indicates the banality of the assumption that life should provide redemption. Jurek explains this best when he tells Teresa why he killed his aunt:

Teresa. Do you understand? Thousands of days, thousands of hours, during which nothing ever happens: the staple of my childhood and adolescence. Dreams that turn out to be just as empty. Or worse—they turn out to be a poison that kills any chance of healthy vegetation. Were we fed the stories of valiant kings, knights and other heroes—just to be vegetation? Why have I been condemned to vegetation? Who is to blame for it? Who?

Jurek, Bursa’s Hamlet, bemoans his dissatisfaction with this “o’er hanging firmament,” this “paragon of animals,” all while his aunt’s corpse (like the “perturbed spirit” of Hamlet’s father) nags him to do something—anything—not out of duty to avenge her murder, but to avenge his own failure to live with purpose.