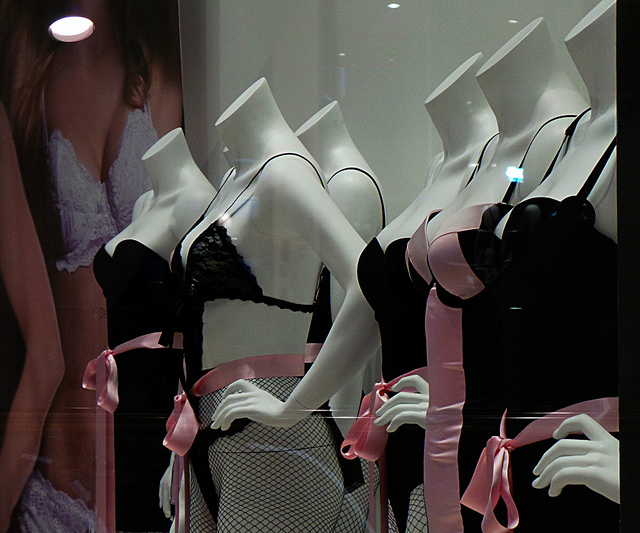 IN THE MID-OUGHTIES
by Sam Cha

we thought we were men. We were all married for a year and a half or so. Our wives played cello or bass and read two books a year. We left our doctoral programs and played competitive video games. We spent most of our time looking at Wikipedia and watching anime. Sometimes we’d wander down Broadway at five thirty in the morning. Those were the days, I think, when we were still wondering sometimes about the informational content of the Brownian motion of the water molecules in the steam from the vent on the east corner of Twenty-Third Street―how many ones and zeros? Water there, water not. Writhing water writing Ulysses, are you searching for lost time? How many slices of pi? Three or one or four or one and five? How many monkeys have you written, typewriter Hamlets? Who will read the steam, scoop it up whole, save it in a jar? That library of clouds, filled with all the books we’d never write.

Sated with despair, we’d peer into the window-fronts where mannequins modeled lingerie. Don’t you remember? They were wearing vinyl corsets shiny as deathwatch beetles. They were headless armless legless. Torsos like eleven year old girls. Or else they were just arms, just legs scuttling over our retinas in garter belts, in crotchless fishnets, in purple lace fingerless gloves. We’d sit alone in bars and smoke and eat and strike up conversations with serial killers who were reading new translations of Beowulf. They’d invite us over to their apartments to watch documentaries about Henry Darger or Joseph Cornell and then maybe some blood play for beginners or light domination, but we had trains to catch back then and anyway we really wanted to fuck a co-worker or maybe a Starbucks barista who was much too young or much too blonde or much too smart or some combination thereof: chimeras of sexual unsuitability. Remember how our hearts were melting like lead, my dear Bellerophons, my fellow tinsel soldiers. On smoke breaks we’d light the co-worker or barista’s Parliaments, mutter something about postsecularism, thrust our left hands into our coat pockets. Remember how loose our rings became in winter? How easily they slid on, slid off?

But we were forty to fifty pounds overweight. We’d fuck our wives, them on top, straining, looking like they were trying to reach something with their teeth, something dangling just out of reach, just beyond the tips of their tongues, and we’d feel close to nothing, far from everything. You were there. Do you need me to say this? We’d picture black waves rippling over our bellies, we’d imagine the tits of the strippers who dry humped us at our various bachelor parties, we’d smell the ghosts of baby powder and cigarettes and hair-metal sweat: guns and anthrax poison rose, deaf row chili leopard skid, pour wet sugar on your slippery prom pie cherry kid, sweet, sweet, sweet child of wine under the bridge—How soft your skin is, the strippers whispered, as they licked our earlobes. Do you want another song, baby.

Afterwards we’d eat salt bagels the size of pizzas smothered with smoked fish shredded with sour cream and cream cheese and scallions. Sturgeons glided behind our eyelids, silent and whiskered, hungry for a hundred million years. Their ganoid scales, their Caspian eyes. Salt and still as fading inland seas.

We’d scrape out the insides of the ribcages of rotisserie chickens and chew the bones for flavor. We smoked and we smoked. We told everybody we’d already quit. We eyed tall brunettes on New Jersey Transit cars. We wished our wives stronger chins, we wished them cheekbones, we wished them cruel eyes. We sat on benches and sipped venti chai lattes and scribbled furious sad things in twenty dollar notebooks. We’ve lost all our notebooks. We ghost wrote English papers for community college students, had frantic AIM sessions where our clients said their professors were suspicious, what did we mean “Fortinbras is Hamlet’s specular double,” HELP? We fact-checked children’s books, we relied on the internet, we smiled when we didn’t feel like smiling, we tried to buy drugs from kids we met at raves. We’d arrange meetings in bodegas on Fourteenth street and they’d hand us pills that never worked and nothing ever seemed to work. At night we’d listen to the girls downstairs fuck, we’d breathe in the incense filtering upstairs, we took Neurontin, we took Vicodin, we smoked pot till we fucked our wives and called them goddess, goddess, panting, and she pushed me off, she pushed you off, they pushed us off, a Weltgeist of disgust on their faces, a universal parliament of disappointed women, a choir of broken safety pin voices, go jerk off on your own fucking time asshole, and so we got up, all of us, paisley still swirling in our nostrils and green green vines curling through our ears; we got up and wiped off our cocks and sat in the bathroom and held our heads between our hands. We were twenty-five or twenty-six and there were fruitfly corpses stuck to our ceilings there were needles in our carpets there were sharp things in our skin and all we wanted was something to break but what?

Those smear days drear days blear days fever daze grey maze hack plays clichés clichés clichés excised revised closed eyes. Lies and lies and lies. Nothing I am telling you is true. Everything was uglier than I could write it. You remember. Correct me if I’m wrong. Back then we believed that we were made for something different, something special, something better. 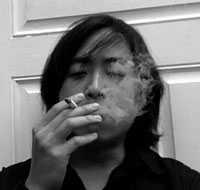 Sam Cha recently completed his MFA in poetry at UMass Boston, where he was the 2011 and 2012 recipient of the Academy of American Poets Prize. He’s a poetry editor for Radius. His work (poems, essays, fiction, translations) can be found at Amethyst Arsenic, anderbo, apt, ASIA, Banipal, The Bakery, decomP, Gravel, Memorious, Paper Scissors, Printer’s Devil Review, and shufPoetry. Also, in two anthologies: Knocking at the Door: Poems About Approaching the Other, and The &Now Awards 2: The Best Innovative Writing. He lives and writes in Cambridge, MA.