I receive a text from a friend.

Since preschool, our girls have been kindred spirits. They are on the brink of young adulthood, buds pressing through tee shirts, splotches of pink and red in a constellation across their hairlines, limbs long and gangly.

“Is Kate able to come to the park? The one by your house?”

I pause, like cold water pouring over my naked brain. It’s taking time to not panic about letting my daughter venture to the park alone, with a friend. I worry. Perverts. Sunburns. Crazy mothers.

“By the way,” she types. “They found her in a bathtub full of water.”

I know this friend’s relationship with her own mother is estranged. Alcohol. A slew of dysfunction fueled by addiction. My friend’s mother’s issues, like mine, are rarely discussed, but there, under the surface, boiling and festering. An unnamed force connects us as friends, as mothers.

“How devastating,” I respond.

It’s been two weeks since a similar image of my own mother slithered across my mind’s eye. Bathtubs, beds, another intimate piece of one’s life.

“She’s alive, but barely. They’re going to take her to a hospital,” she types back. I tell her I’m sorry.

“She doesn’t have long,” she responds. “It’s the alcohol. Her systems are shutting down.”

And they do. A week or so later, another text alerts me that her mother passed away. Two women, one in Missouri, one Tennessee. Mental illness. Substance abuse.  Both estranged from their daughters. Gone.

“The girls are at camp this week; we have a lot to process. Let’s do lunch,” she says.

I’m behind a transport shuttle for old folks, the sprawl of the Chicago suburbs under my tires, stop lights and road construction. Building up, breaking down. The bus is white. The emergency door reads, “Children. Caution.” The words are stacked on top of each other, printed in big, black lettering. I see a woman’s body inside, her head, neck, legs jutting into the middle of the aisle, leaning forward, eager, anticipating her stop, her next statement. She’s gesticulating, waving her hands back and forth, frantic. I think she is telling the driver where to turn, where she needs to go. And there’s this part of me saying, turn around, look at me; I need to see your face. But she doesn’t. I don’t need to see this woman’s face; I know it looks like mine.

The horizon begins to look familiar. The green fields. The sign. I follow the gravel road laced with pits and potholes.

My friend dresses up a bit, sandals instead of tennis shoes. A flouncy shirt. And immediately I’m glad to see her, sisters in estrangement. The hostess leads us to our table. We sit and lean forward, peer at the menu, handwritten with seasonal favorites, peaches and blueberries, smoked applewood meats, croissants and peach tea. We order.

She pushes the cranberries around her salad and makes a pile of candied walnuts. Nothing’s wrong with the food; it’s us. Our emotions are out of whack; the part of our bodies that digest food are processing the aftereffects of death. A thought crosses my mind: is it okay for me to be here, enjoying food alongside a friend in the summer’s sun while our mothers rot and decay in ground beneath our feet?

I take a bite. I chew methodically.

“She had a slew of cats, at least twenty” my friend says. “They’ve been taken to the shelter. It’s the best thing.”

“Some were sickly, dying. Others hungry, mangy. It wasn’t a good situation. No way was she was caring for them, even when she was alive.”

I know how substance abuse is: nothing matters except you, your fix.

The candied walnuts disappear. The peach iced tea. The fruit cobbler is delivered. Each in its own crock topped with vanilla ice cream and a dusting of cinnamon. The spoons are frosted. A hot wind blows. Do they know we are here, together, left-behind daughters talking of their collective loss, the hurt and estrangement?

The ice cream melts on my tongue. I eat greedily, scraping the bowl with my spoon, filling myself with the sweet taste of freedom. And then she leans forward and says, “I have her money. But I don’t want it. It’s tainted. It’s no good.”

My mother had nothing to give. Instead she left a mountain of debt. Scraps of material. Patterns. Dust. Broken promises. I push the dessert away.

“He was terrible to me: her husband.”

I don’t know if I can stomach what comes next, but I must. For those tender, delicate formative years of my friend’s life, he crept into her room and did unmentionable things. She tried to tell her mother, but she sided with him, always.

My skin prickles and I wince. It’s deplorable. I know nothing, not a single utterance will make the truth any less bitter. I know what it’s like to be stripped of one’s innocence, of one’s childhood, because it happened to me, but in a different form.

We’ve lost our appetite. We ask for the bill. We praise the food, the setting, and deep down inside, we are empty.

To our right, a large barn is filled with trinkets and treasures made by artisans and craftsmen. A vintage market is being held at the tea house. A white tent flaps in the wind. We need a diversion, and so we go, leaving behind grief and hurt. Our first stop is a jewelry maker whose booth is filled with pendants and earrings, bracelets. I pick one up that catches my eye. An enameled disc with a four-leaf clover embedded in the middle. I spin it around, inspecting each leaf, slightly bent and broken, but intact. I note the price and feel it’s too high.

The artist notices my interest and steps forward, “You can place this on a necklace of any length, a bracelet, whatever.”

“These are genuine four-leaf clovers, sourced from Ireland.”

I’m not sure if she’s being honest, or hinting at a sale. Perhaps she went out in her backyard and searched for them herself? Maybe they blossomed over my mother’s grave? “Thanks,” I say, and place the item down.

We stroll through the lavender-infused tent. Soaps. Lotions. Hair ties. Baby bibs. I tell my friend I am looking for miniatures, “You know, like for a dollhouse?” It strikes me that I am looking for diminutive things that represent home and hearth, comfort and security. Small, smaller. Infinitesimal. The ones I need are so minuscule, a grain, if they ever existed, and I know they are nowhere to be found.

I ask anyway. “Any dollhouse miniatures,” I venture. “Fairy garden items?” The woman with a nametag on her shirt shakes her head. “Nothing like that.”

Sometimes I imagine my mother on a remote island where she sews doll clothes and sells them to rich tourists on the street. The idea tumbles in my mind, bitter and calculating, like spinning a plot for a novel.

Could it be that in her final act on earth, she was giving us a gift? One in which she removed herself permanently from our lives?

Yet narcissism defies that. By its very nature, narcissism seeks to draw attention, to bolster its image to that of superiority, to sequester admiration. By not being here, she’s given us a lot to ponder, and, perhaps, miss.

I purchase a pair of earrings, a few hair clips for Kate and Kelly. I smile as the artist hands me the bag filled with her handiwork.

My friend looks at items, holds them to the light, a discerning smile on her face.

“You should get it,” I prod. I’m not sure why I do. I think it’s because I’ve already purchased something and feel she needs to go home with a memento.

She places the soap down.

We both know we need more than a bar of a soap to wash away the years of sand, to slough off the hate and anger, a lifetime of loss. We circle to the front of the tent, hover around the first artisan, the one with the four-leaf clovers. She picks up the pendant, inspects the verdant plant pressed under glass, in a circle the size of a quarter. Along the top, the word luck is inscribed. She tells me her husband’s birthday is St. Patrick’s day. But it’s more than that; this pendant means something to her. She holds it to her chest, near her heart.

“I’m going to get it,” she says defiantly. 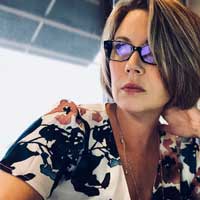 Leslie Lindsay is a mother, wife, and writer living in Chicagoland. Leslie is the award-winning author of Speaking of Apraxia (Woodbine House, 2012). Her work has been published in The Awakenings Review, Pithead Chapel, Common Ground Review, The Nervous Breakdown, Manifest-Station, the Ruminate Blog, and The Mighty. Leslie is at work on a memoir about her mentally ill, interior decorator mother and her mother’s eventual suicide. She reviews books widely and interviews authors weekly at www.leslielindsay.com. Leslie is a former child/adolescent psychiatric RN at the Mayo Clinic. Read her craft essay “Is Memoir Automatically Therapeutic” on Cleaver.